A scientific expedition to a remote island off the east coast of Papua New Guinea has documented the near-mythical Black-naped Pheasant Pigeon for the first time in 140 years.

After a month of searching, a team of researchers managed to capture footage of the elusive forest species in September.

Known only to Western science from a type specimen collected on Fergusson Island in 1882, the distinctive taxon was feared possibly to be extinct. Members of the team had previously attempted to find the beautiful, ground-dwelling pigeon in 2019, but didn't find any trace of it.

The 2022 expedition also appeared to be heading for a blank until its final day, when a check of camera trap footage by co-leader Jordan Boersma produced a welcome surprise. Boersma said: "It was, without exaggeration, the most surreal moment of my life."

The discovery would not have been possible without the knowledge and skills of local Indigenous communities. The team was able to utilise local hunters' "intimate knowledge" of the forests in order to track down suitable areas for Black-naped Pheasant Pigeon. Although their initial enquiries were fruitless, the researchers eventually talked with local villagers high on the remote western slopes of Mount Kilkerran that recognised Black-naped Pheasant Pigeon, referring to it as Auwo. One hunter, Augustin Gregory, was able to direct the scientists to an area of forest where he had seen and heard the bird.

A number of days after the initial discovery, the team found that another camera, set several kilometres away, had also captured a Black-naped Pheasant Pigeon. Given the distance between the two sightings, it was almost certainly a different individual.

Although very little is known about Black-naped Pheasant Pigeon, scientists suspect that its population is likely very small and declining. Logging companies appear to be a growing threat on Fergusson, while introduced predators including feral cats are likely to have had an impact on the species. Preventing Black-naped Pheasant Pigeon from becoming extinct will necessitate further study of its range, population and behaviour, as well as launching conservation projects with local residents taking a leading role. 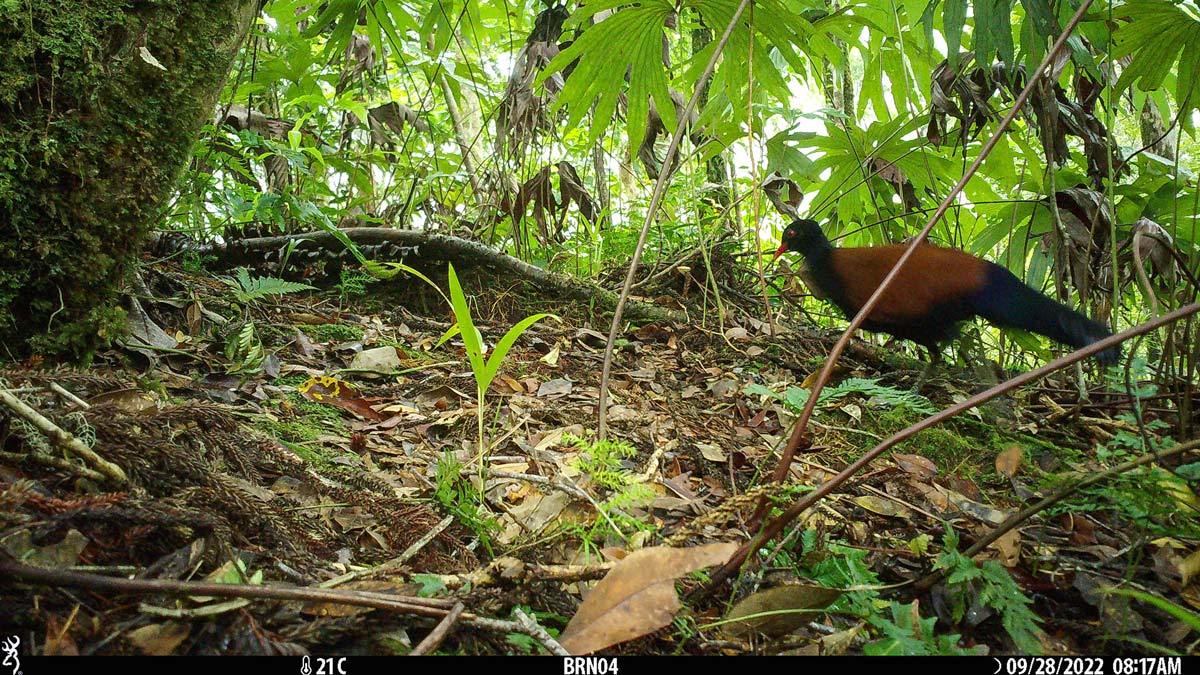 This second Black-naped Pheasant Pigeon was caught by camera trap several kilometres from the site of the original rediscovery (American Bird Conservancy).

The expedition was part of The Search for Lost Birds, an initiative which aims to rediscover more than 150 bird species that haven't been seen for at least a decade, but are yet to be declared as extinct. It is a collaboration between Re:wild, American Bird Conservancy and BirdLife International.