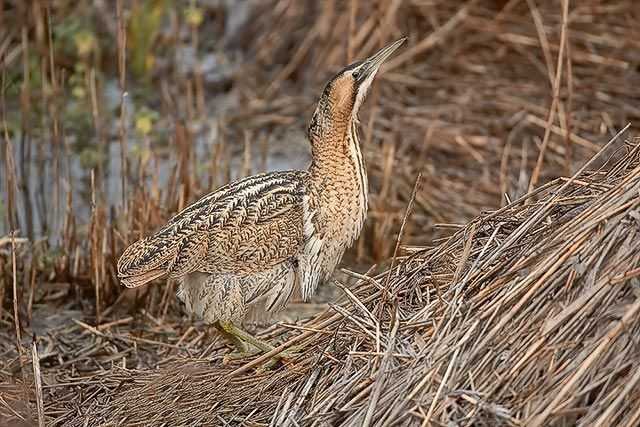 Following recolonisation of the UK early in the 20th century, Bittern numbers increased to a peak of about 70 booming males in the 1950s, but then fell to fewer than 20 in the 1990s, with similar declines witnessed in many other countries in Western Europe. By 1997, there were only eleven booming male Bitterns in the UK; these were mainly within Norfolk and Suffolk, but with a small outlying population at Leighton Moss in Lancashire. This historic decline and current rarity has led to Bittern being listed as a UK BAP (Biodiversity Action Plan) species and included on the red list of UK Birds of Conservation Concern. Bittern is also on Schedule 1 of the Wildlife and Countryside Act and Annex 1 of the EC Wild Birds Directive.

The British Bittern population has had a full survey every year since 1990. The main aims of the annual survey are: 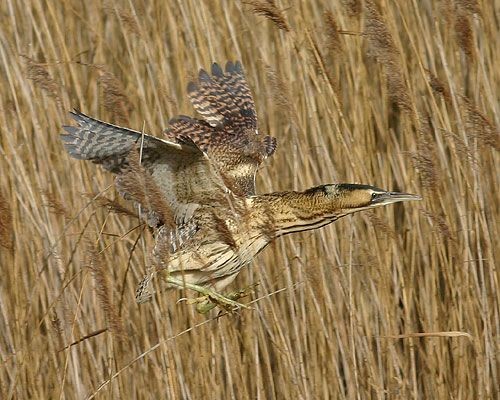 The RSPB carries out the survey every year with paid fieldworkers and the help of many landowners, wardens and volunteers. RSPB and Natural England jointly fund the monitoring programme, through Action for Birds in England.

Please contact us if you hear any booming Bitterns this year

With reedbed creation throughout the UK and a rapidly expanding Bittern population, we are increasingly reliant on landowners, site managers, wardens and local birders to report booming to us. Please keep an ear out for them this spring, even at sites where they have not been heard for many years. To report a booming record or for more information, please contact Simon Wotton or Dave Fairhurst, on the contact details below.

In 2006 there was some stabilisation in the UK Bittern population. The number of booming male Bitterns recorded was two down on 2005, at a minimum of 44 boomers. This followed the much larger decline of 16% between 2004 and 2005. Twenty-seven sites were used by booming Bitterns, down by just one on 2005. The number of active nests located, at 27, was the same as in 2005. 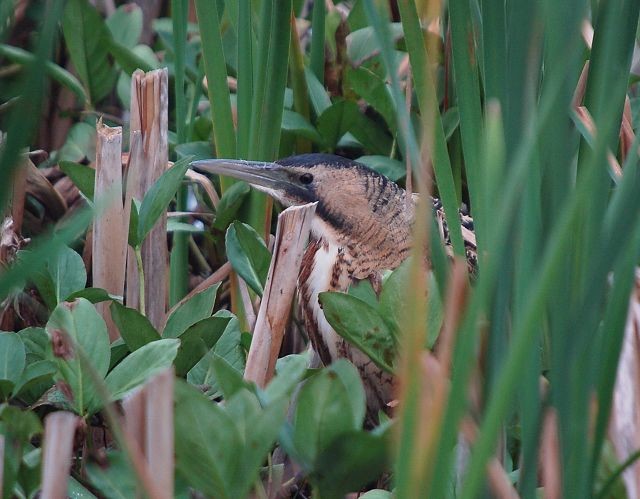 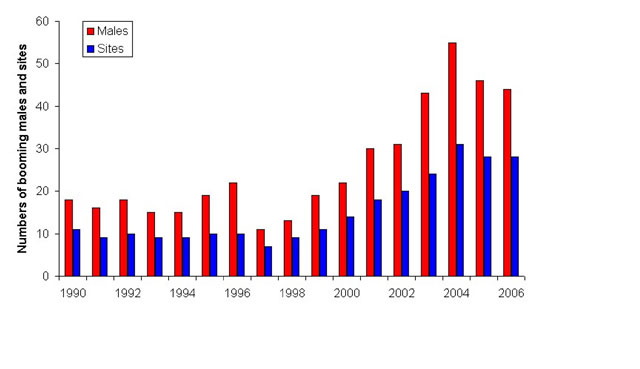 Figure 1: The minimum number of booming Bitterns in the UK since 1990, and the number of sites involved. 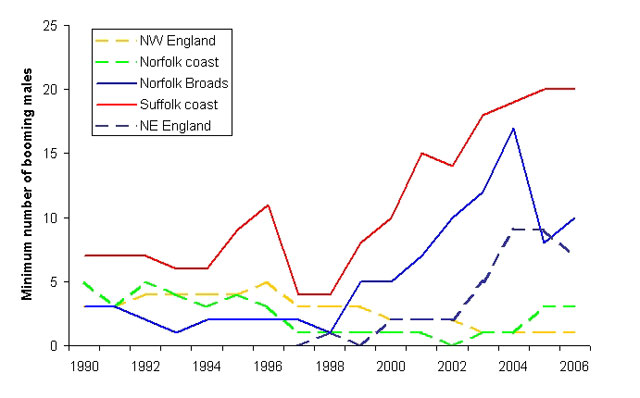 Figure 2: The minimum number of booming Bitterns in the key regions since 1990.

Figure 1 shows the numbers of booming Bitterns since 1990 and Figure 2 provides a summary of booming activity by region. After an initial mild spell in early to mid-February, there was a prolonged cold snap throughout March and into early April, which stopped all the early booming. Following this cold spell, most sites experienced later-than-normal booming.

In the Norfolk Broads ten boomers were detected, a welcome increase from the eight recorded in 2005. There was booming at a new site in the Broads this year. On the North Norfolk coast, three birds were heard at different sites, including a boomer for the second year running at Titchwell RSPB reserve, and a site within the Holkham NNR held a booming bird for the first time in 11 years.

Within the five regular sites on the Suffolk coast, there was little change, with 20 boomers recorded for the second year in a row. For the first time, three birds were heard booming at the same time at North Warren RSPB reserve, although one of the birds called only briefly (for less than a week). As in 2005, ten birds could be heard booming simultaneously at Minsmere (on two separate occasions), but it is considered that only nine males held territories for a week or more, as there were several 'floating' birds calling from various locations within the reedbed. 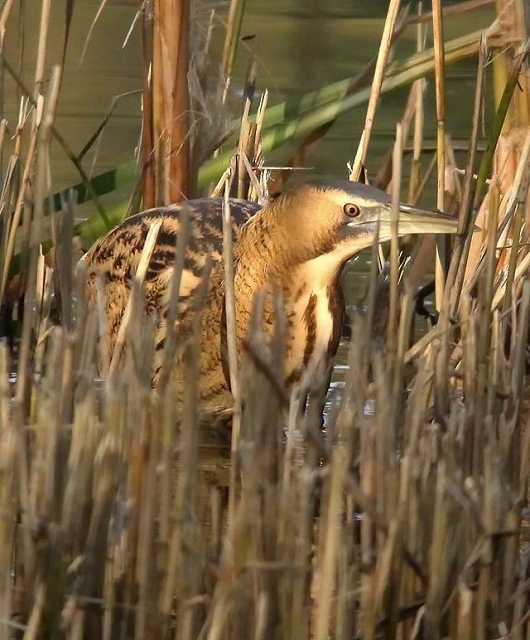 There was only one boomer in Cambridgeshire in 2006, down from four in 2005. The newly created reedbed at Lakenheath Fen RSPB reserve in Suffolk attracted a Bittern that boomed here for over a month, following on from a previous record of a bird heard briefly here in June 2004. In Northwest England, just one boomer was located at Leighton Moss RSPB reserve, for the fourth year in a row. In Northeast England there was a slight reduction from nine boomers in 2005 to seven in 2006. In Surrey, a bird was heard booming at the Thames Water site of Kempton Nature Reserve for three weeks from the middle of April.

As in previous years, female nesting activity was not recorded at a large number of the sites where there was confirmed booming. Only 12 of the 27 sites (44%) that held males had active nest sites. By far the best region for nesting Bitterns was once again the Suffolk coast with 18 active nests detected, at all five booming sites. In the Norfolk Broads, there was a reduction from six nests in 2005 down to four this year. Nesting was located at just three sites, one of which was a new nesting location. On the North Norfolk coast two of the three booming sites held nesting females. Away from East Anglia, only three nests were found in 2006. 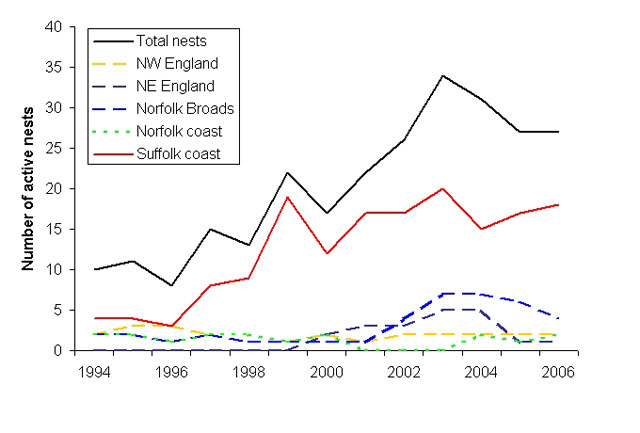 We wish to thank everyone who has helped us in monitoring bitterns in the UK: site managers, landowners, wardens, volunteers, county recorders and local birders for their reporting of boomers and in many cases following up reports of birds. Particular thanks goes to all those volunteers who helped with co-ordinated watches, especially the volunteers and staff at Minsmere and Leighton Moss. The Bittern Monitoring Project is jointly funded as part of Action for Birds in England, a conservation partnership between English Nature and the RSPB.