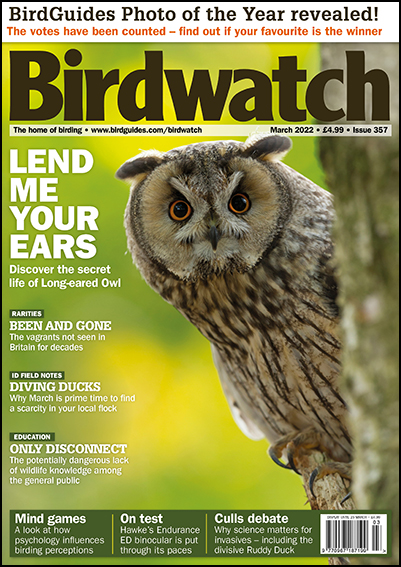 The digital edition of the March 2022 issue of Birdwatch can be downloaded onto any device today. The paper magazine is available in the shops from today (24 February) – or you can order online.

This month's issue reveals the winner of our Photo of the Year competition – as voted for by you!

Breeding in small numbers across Britain and Ireland, as well as being secretive and almost entirely nocturnal, Long-eared Owl can be challenging to catch up with. David Campbell takes an in-depth look at the species’ fascinating history.

How is it that a large group of birders can all manage to misidentify the same bird? Why do some people have an uncanny ability to find rarities? Julian Hough delves into the psychology of birding to answer these and more questions.

Lockdowns allowed people across the globe to reconnect with wildlife, but it also revealed a worrying level of misunderstanding about the natural world. Lucy McRobert discusses the lack of knowledge among the general public and what can be done to educate people.

There is an intriguing number of species on the British list that once occurred here but haven’t been recorded in decades, some of which are still found on the near Continent. Dominic Mitchell considers reasons for this, and wonders if some of them might make it back here one day.

With Tufted Duck and Common Pochard on the move in March, it can be a good time to sift through flocks for rarer species, especially following a what’s been a great winter for Lesser Scaup and Ring-necked Duck. In this month's ID field notes, Andy Stoddart provides all the information you need to locate and identify your own.

Plus: more thought-provoking comment from columnists Lucy McRobert and Dominic Mitchell, the team at BirdGuides provides round-ups of January’s birding highlights from Britain, Ireland and the wider Western Palearctic, news, views and reviews, advice on building your birding skills and knowledge and our expert panel answers your questions.