Birds of a feather

William Hudson, a representative of the Society for the Protection of Birds (SPB), recoiled in horror as he witnessed the sale of 80,000 parrot and 1,700 bird-of-paradise skins in London in 1897; spread out in Trafalgar Square they would have covered a large proportion of that space with a grass-green carpet, flecked with vivid purple, rose and scarlet. United by expertise, commonsense and outrage, by 1922 a group of people from different countries had seen enough. They concluded that the only effective answer to the growing trade in wild bird feathers had to be co-ordinated international action.

These pioneers of modern conservation recognised the importance of birds in the "balance of nature". They advocated their value to mankind and their need for effective protection: the intrinsic value of birds in their natural ecosystems far exceeding their fleeting value as fashion adornments. This year, BirdLife International celebrates its 90th anniversary and reflects on the foresight these people had to form the world’s first truly global conservation organisation, the International Committee for Bird Preservation (ICBP), which became BirdLife in 1993. 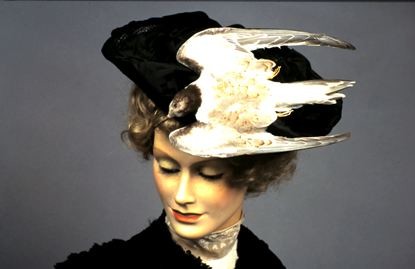 An example from the Netherlands of a Little Tern used in millinery (Vogelbescherming Nederland).

The ICBP got straight to work, cultivating an appreciation of the value of birds throughout the world, and after just two years already had 18 national sections: these would go on to become BirdLife Partners. ICBP members sensibly used their scientific expertise to provide clarity in their proposals, taking into account the diverse legislation and customs of different countries. As well as lobbying against the trafficking of wild bird feathers, by 1928 they had passed resolutions for the creation of bird sanctuaries, preventing the collection of large numbers of rare eggs, an international convention on oil pollution, and a "closed season" on hunting during the spring migration.

The Chairman, Dr Pearson, stated in 1922: "We believe that in organising a worldwide Committee we can be of much aid to each other in our several countries by the interchange of literature bearing on bird study and bird protection." Ninety years later — now with Partners in 116 countries — BirdLife International uses similar words: "By united action we should be able to accomplish more than organisations working individually in combating dangers to birdlife." Taking the title phrase quite literally, a group of experts united by their passion for birds grew into a powerful flock of international NGOs that are furthering their work today.