Birds feathering their nests with some surprise tenants

Renting out one of your rooms or moving in with friends are options that many people have taken during the recession, but it seems some wildlife has had the same idea. At the time of year when the RSPB is urging people to put up nestboxes ready for next spring, a surprising number of unusual shared occupancies have come to light. 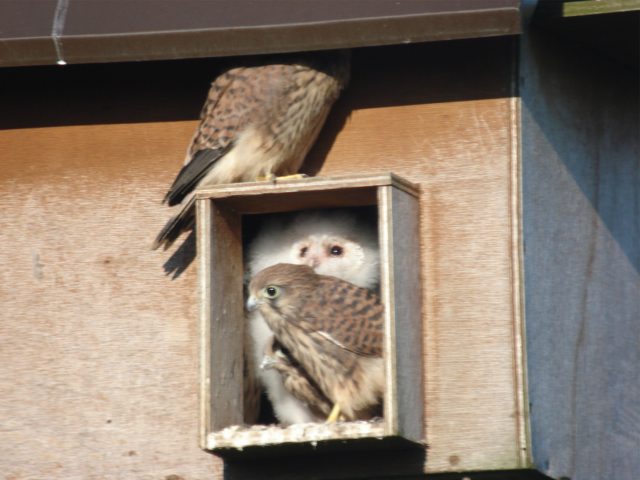 The charity's wildlife enquiries team has been encouraging callers to clean out existing nestboxes and to put new ones in position so they are in place for when birds start to 'recce' possible nest sites in the spring. Some birds will start to roost in them in the next few weeks as the weather turns colder too. And the number of extraordinary reports of some species doubling up in nestboxes in recent years has come as quite a surprise. Barn Owl nestboxes seem to attract the most unusual tenants, with reports of the generous bird of prey sharing their nest boxes with birds such as Jackdaws, Kestrels and Stock Doves.

Many birds are furiously territorial, especially when raising their young. And callers have reported that some birds sharing a home are constantly harassed when trying to get into their house-share, making it even more bizarre that they should persist. Other birds that have been spotted nest sharing are Blue Tits and Great Tits, and both of these species have been seen sharing with Pied Flycatchers too.

Experts believe one reason for the shared occupancies could include multiple cavities in some nest boxes, leading to the birds fledging from one cavity and returning to roost in the 'wrong hole' that is already occupied. Another reason could be because they have unwittingly laid their eggs in the active nest of another species.

There may also be a lack of nesting sites in some areas. Many larger birds that nest in holes in trees or in older, undisturbed buildings are having difficulty finding suitable nesting sites, as buildings are knocked down or converted.

Richard James, RSPB wildlife adviser, says: "Now is a great time to put up new nestboxes or give old ones a clean ready for the next round of breeding in spring. Long before eggs are actually laid and chicks hatched, the adult birds will start to scope out possible nest sites. It's great to hear that people are getting so excited about unusual lodgers and although its quite unusual, it just goes to show you never know quite what you might find in your nest box. You could be providing a home for all sorts of strange house-guests!"

If you discover that you have two species sharing a box, you should put up another box elsewhere in the garden for next year. Both species might want to breed in the area again the following year, so adding another box will ensure they have their own space.

Richard James says: "When two species both have young in it will get crowded, so the adults might have to wait their turn. They would both appreciate another box! Different species have different nesting requirements, but the general rule of thumb is to position a nestbox so it isn't easy for predators to get in, and try and face it away from strong sunlight and prevailing winds."