A British birder stumbled across a hoard of ancient Celtic coins worth more than £800,000 at an undisclosed site in eastern England in September, it has been revealed.

The finder, who wishes to remain anonymous, was watching a Common Buzzard facing off with a couple of Magpies when he caught a glint of gold out the corner of his eye.

Having rubbed the mud off his find and realised it was a 2,000-year-old Celtic gold coin, he rushed home for his metal detector before returning to carry on the search.

After several hours, and to his utter disbelief, he found about 1,300 coins, all dating to around 40-50 AD – within a decade of Celtic queen Boudicca's famous and brutal uprising against the Romans.

Experts believe each coin could be worth up to £650, putting the value of the entire collection at £845,000. 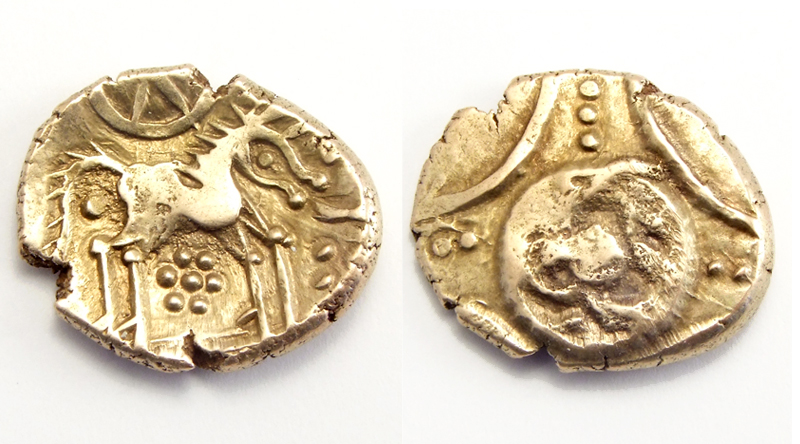 Around 1,300 Celtic gold staters, similar to the ones pictured above, were uncovered by a birder in eastern England in September (Numisantica / commons.wikimedia.org).

It comfortably surpasses the previous record Celtic hoard of 850 coins found at Wickham Market, Suffolk, by another detectorist in 2008.

The lucky finder, in his 50s, has described the discovery as "life-changing".

He told told Treasure Hunting magazine: "Although I am a keen detectorist, that evening I was doing a bit of bird watching.

"After watching a dogfight between a buzzard and a pair of Magpies, I stared down and spotted something lying in a bit of the deep ploughed soil which ran around the edge of the field.

"I saw the glint of gold and realized it was a beautiful Celtic gold stater, which made me sit down in sheer shock,” he continued. "I then spotted the second coin two feet away and rushed home to get my [metal detector]."

He stuffed all the coins into two supermarket shopping bags, hoping that they would withstand the weight. He then notified the local coroner’s office, which oversees protocol in accordance with the UK’s Treasure Act of 1996, including the decision of who gets to keep the coinage: the finder, the landowner or a local museum.