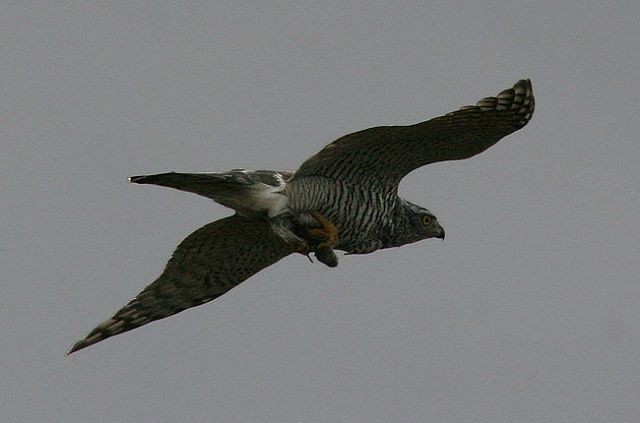 Wildlife persecution has taken a sickening new twist according to the RSPB, following the discovery of a dead squirrel laced with strong adhesive, set as bait to lure and trap Goshawks - a much-persecuted bird of prey across the UK. Following a tip off, RSPB investigators made the grisly discovery in early March of the 'sticky squirrel' placed below an active Goshawk nest within the Upper Derwent Valley, Derbyshire. Squirrels are a frequent prey item for Goshawks, leaving investigators in little doubt that this magnificent bird of prey was the intended victim. This view is reinforced by the fact that the bait was placed on a pile of teased-out twine, which experts believe would have entangled any victim's talons.

This incident, which was reported to Derbyshire Constabulary, is the latest wildlife crime horror story to be reported in the Peak District. Yesterday, the RSPB published a report - Peak Malpractice Update 2007 - highlighting a catalogue of wildlife crime incidents from this region. Ian West, the RSPB's head of investigations, said: "Although people have received jail sentences for persecuting Goshawks in the Peak District we haven't seen anything like this before. The nature of the trap and its position clearly indicate this was designed to kill the breeding Goshawks at this location. Any bird unlucky enough to get trapped would have suffered a lingering death, unable to find food or fly, as the glue and baler twine increasingly entangled the victim." A further ball of baler twine covered in adhesive was found close to the same Goshawk nest. Although these two traps were removed and no Goshawks were caught, the birds attempting to nest nearby failed in June when four Goshawk chicks vanished mysteriously.

The RSPB and Derbyshire Constabulary are appealing for any information in connection with this incident or wider bird of prey persecution in the Peak District. The RSPB is calling for the illegal killing of birds of prey to stop. The RSPB is asking the public to show their support by signing an on-line pledge. Visit www.rspb.org.uk/birdsofprey for further information.