The island is home to the only Roseate Tern colony in the UK, with around 150 breeding pairs of the species registered at the start of this season.There are also Sandwich, Arctic and Common Terns on the island, with bird flu affecting all four species, resulting in serious losses of chicks. Numerous adult birds have also died, which could severely affect seabird populations in the coming years. Two-thirds of young Roseate Terns have been lost (Frank Golding).

Paul Morrison, RSPB Warden for Coquet Island, told Chronicle Live: "The Common Terns were the first to fall victim to bird flu with the loss of the adults, and then it spread to Arctic, Sandwich, then Roseate Terns. We've now lost two-thirds of the Roseate Tern chicks and that's absolutely catastrophic in terms of chick loss.

"Coquet is the only place where you'll find them, last year there were 150 pairs so that's a species on a knife edge anyway. But they have been doing well every year until this year, increasing brilliantly at the start of the season, but then bird flu hit three or four weeks ago and it's just been working its way through the population."

If bird flu deaths were limited only to chicks, it would cause a "glitch" in the population but adults could still return to breed next year and over time the population would have the possibility to recover. Paul says the fact that adult birds are dying as well is "really serious".

He continued: "The crucial thing about bird populations is that the adults must survive because they're the potential chick source for the future. We wish they would just leave and get off safely, but their instinct it to keep on trying to look after their chicks.

"It's bizarre because when there's a shortage of food, the survival instinct of terns is to abandon their young and get back to Africa so they're safe and come back the following year. But with bird flu, they don't register or understand so they don't flee, and if they did, they would save themselves for the breeding season." 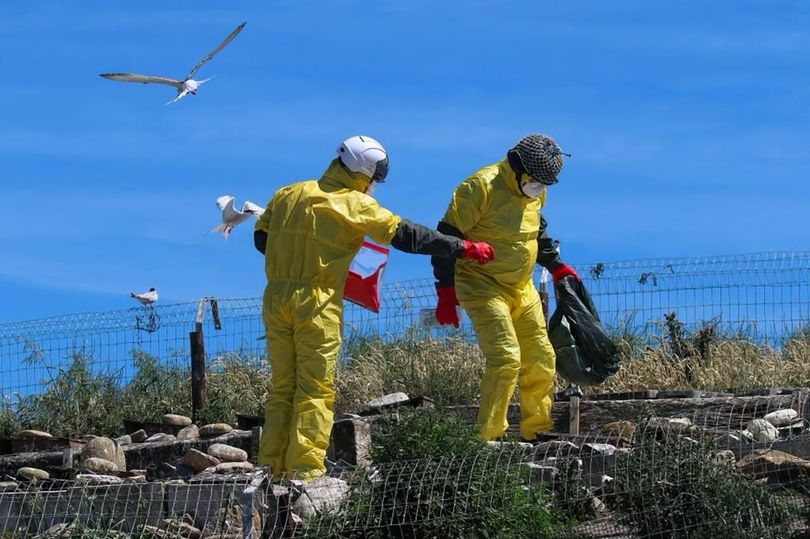 Those clearing away the dead birds on Coquet Island are doing so in full PPE to minimise the risk of bird flu (Paul Morrison/RSPB).

It has only been a matter of weeks that bird flu has been present on the island, with Paul saying that the speed of the spread is 'frightening', with the majority of the Sandwich Terns being wiped out in two to three weeks. The RSPB is now attempting to limit the spread as much as possible and protect the seabirds that remain on the island before they migrate again.

Despite the bad news for terns, there is some relief in that the virus has not had the same effect on other species. Paul added: "The Puffins so far haven't been significantly hit by bird flu, there are still lots of them. The others that seem to be escaping it are Kittiwakes; there's a big colony of those on the island."