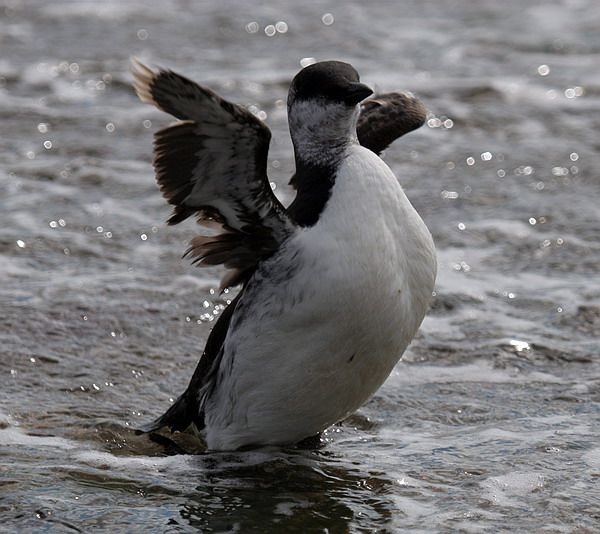 Guillemot: It seems that Guillemots are the species that's been worst affected (photo: Dean Eades).

The numbers of birds oiled as a result of spilled fuel from the stricken MSC Napoli has risen to more than 1,000 according to reports coming in from along the Devon and Dorset coast.

The RSPB has received information that more than 200 oiled gulls have been seen on the River Axe, near Seaton in Devon, along with reports of a number of birds from locations further west in the county from as far as Slapton.

The news comes on top of a bad day for Dorset's birds, with hundreds of Guillemots oiled at Chesil Beach and at Portland.

The RSPB's Sophie Atherton said: "This is very bad news for the region’s wildlife. It seems that Guillemots are the species that's been worst affected – once their feathers are oiled their plumage is no longer waterproof which means they cannot dive for food and without feeding have no way of flushing oil out of their bodies. Oiled Guillemots will die even if there is only very little oil on them."

Low tide is thought to be a crucial time as the Napoli incident continues to affect the area's seabirds, as it could see more oil washed out of the ship through the hole which originally caused it to run into trouble.

The RSPB's regional policy officer, Mark Robins said: "The huge number of birds so far affected only serves to highlight that prevention is the only cure.

"There is no clean up that will compensate for this environmental damage. Our fear is that even further loss of birds and other wildlife is still a big risk.

He added: "Once the worst is over, the discussion must urgently shift from dealing with the fallout to better methods of prevention."