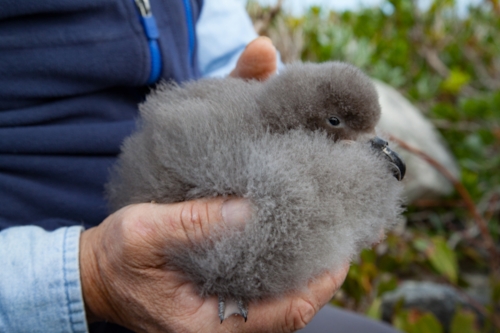 The Endangered Bermuda Petrel has enjoyed another record breeding season in 2017.

The final chick left the nest on the night of 27/28 June, bringing to a close a memorable season that produced a new high of 61 fledged youngsters. The nesting season, which began in November 2016, also produced a record number of 117 established breeding pairs – those that produced an egg, whether it hatched or not. It is thought that such numbers have probably not existed since the 1600s, when the formally abundant petrel was decimated by the arrival of human colonists on Bermuda, through overhunting and predation by introduced mammal predators such as pigs, rats, cats and dogs.

Bermuda Petrel, or Cahow, is endemic to Bermuda. It nests on six small islands, totalling just 20 acres, in the Castle Harbour Islands Nature Reserve, where it is protected by wardens and is the subject of an intensive management program.

When targeted conservation measures began around 1960, the entire population consisted of only 17-18 breeding pairs, producing a total of just seven to eight chicks annually. The population faced many threats and challenges, including predation by introduced rats swimming out to the nesting islands, lack of suitable deep nesting cavities, nest competition from White-tailed Tropicbirds, which took over nest burrows and killed the defenseless Cahow chicks, and light pollution from the nearby Naval Air Station (now Bermuda International Airport), which disrupts the night-flying petrel and disorients the chicks when they depart to sea.

One of the major threats facing Bermuda Petrel has been the erosion and damage to their original tiny breeding islands by repeated hurricanes, the small size of these islands also severely limiting the number of Cahow pairs that can nest on them. To address this, one of the main objectives of the Cahow Recovery Program has been to establish new nesting colonies on larger islands that are safe from hurricane erosion and have more room to enable the population to grow. The islands also must be constantly managed and wardened to eradicate predators such as rats, and control human access to prevent disturbance. 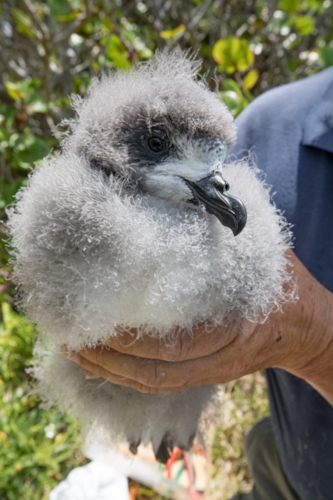 Nonsuch Island was chosen as the site to establish a new nesting colony, as it is managed to exclude rats and other invasive species and is the site of a warden’s residence. Cahows were eradicated by the early colonists on Nonsuch, and had not nested on the island since the 1620s. Translocation is a technique in which chicks are removed from their original burrows on the smaller islets and moved to artificial burrows on Nonsuch, where they are hand-fed daily and allowed to imprint on and fledge from their new site. Cahow chicks were moved to Nonsuch for five years from 2004-2008 and fed until they fledged to sea. This technique worked and almost half of the translocated birds returned between three and six years later to choose nest burrows and mates. By 2017, the number of nesting pairs at this new colony site increased to 16, with eight chicks fledging.

This project worked so well that in 2013 a second translocation program was started, to establish a second colony at a different location on Nonsuch. During the 2017 season, 14 Cahow chicks were translocated to Nonsuch, bringing the total number of chicks moved to this second site up to 65. In addition, during 2017 the first three adult petrels, moved to this site as chicks during 2013 and 2014, returned and started to occupy nest burrows at this second site, with one new pair confirmed, and it seems likely that this signals that the formation of a second new colony is underway.

Other observed threats include the invasion of Nonsuch by rats swimming over from the main island during 2016. These were eradicated by the use of rodenticide bait by November 2016, but this has highlighted the need for constant monitoring and vigilance to prevent further invasions by rats swimming out to the nesting islands. In addition, Hurricane Nicole hit Bermuda directly in October 2016, submerging two of the smaller nesting islands but causing only limited damage. In early June 2017, one of the translocated chicks was stung to death by a swarm of honeybees that occupied its nest burrows, but this swarm was removed shortly after by the Government Agricultural Officer.

Despite these threats, the Cahow population has continued to increase and recover from the edge of extinction. Due to the Recovery Program and the intensive management and control of threats to the species, the future of Bermuda’s unique national bird looks increasingly positive.

More information on Bermuda Petrel and Nonsuch Island can be found at www.nonsuchisland.com