Bee-eaters breed on Isle of Wight for first time

A pair of European Bee-eaters that have set up home on National Trust land on the Isle of Wight have the potential to become only the third record of this exotic southern European species to breed successfully in the UK in the last century. Bee-eaters, which would normally be found nesting in southern Europe, were last recorded breeding successfully in the UK in 2002, when a pair nested in a quarry in County Durham and two young successfully fledged. Before that, two pairs were recorded raising seven young in a Sussex sand pit in 1955, though a pair failed in Herefordshire in 2005. The species, with its kaleidoscopic plumage, is one of the most beautiful birds in Europe. 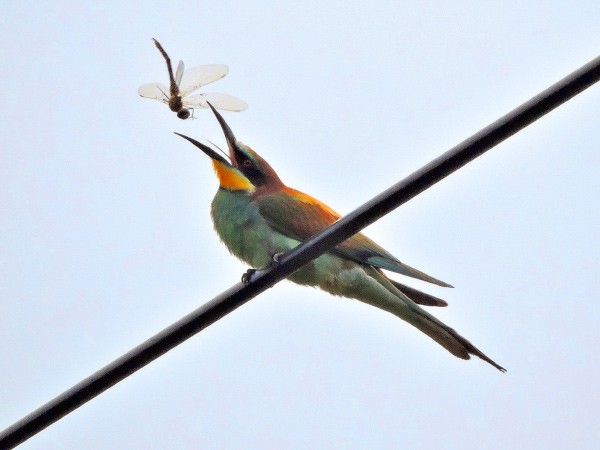 The birds were discovered on the island in mid-July. They have set up home in the sandy hills of the Wydcombe Estate (in the south of the island) in a small valley where the soft ground, rolling landscape and stream access provides ideal conditions for their nest burrow, which can be up to three metres long. Ian Ridett, National Trust Isle of Wight Ranger, said: "We have set up a 24-hour surveillance operation around the site to protect these rare visitors, as any unhatched eggs could be a potential target for egg thieves. We have had incredible support from the RSPB, Isle of Wight Ornithological Group and our volunteers and staff, some of whom have travelled from the mainland to help. The hot temperatures since spring have helped an above-average arrival of Bee-eaters, with more than 10 seen along the south coast since May. With rising temperatures, the varied landscape and bountiful supply of insects on the Wydcombe Estate was obviously enough to tempt the Bee-eaters to nest here."

The adult birds have been spotted delivering food into the nest, which indicates that the eggs have hatched. The chicks will not leave their underground nest site for about another fortnight, so the number of chicks hatched is still not known. Bee-eaters traditionally lay clutches of four to nine eggs, and the first chick sighting is eagerly anticipated.

Matthew Oates, the National Trust's nature and wildlife expert, said: "The Bee-eater is arguably the most stunning bird on the British list; it looks tropical. It's really exciting to have these birds breeding on National Trust land and we are pulling out all the stops to help the chicks safely fledge, while keeping the public up to date with their progress."

Keith Ballard, the site manager at the RSPB's Brading Marshes reserve on the Isle of Wight, added: "It's the stuff of dreams to have a rare nesting event like this on the Isle of Wight; and it's looking like the initiative by the National Trust rangers to make the nest site safe is going to lead to success for these birds. There was a very real threat that these nesting birds could have been targeted by egg thieves, so it's been quite a nervous period over the last 12 days. It has been a pleasure for the RSPB staff and volunteers to help with this operation." 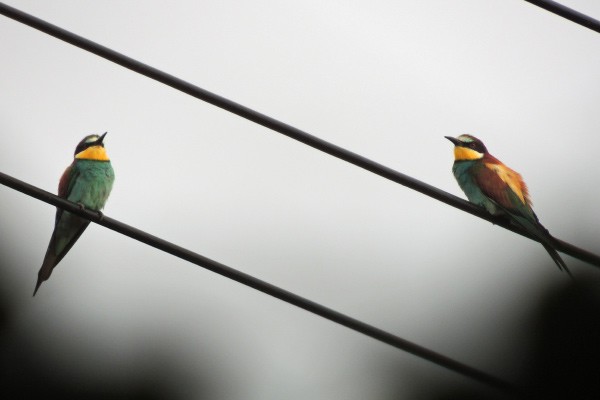 Further information on the Wydcombe Bee-eaters can be found on Ian Ridett's blog at www.facebook.com/IsleofWightNT. News updates will appear at least daily on the BirdGuides Bird News Extra page.

A designated public viewing point has been identified overlooking the birds' favourite feeding area so that visitors can get the best possible views of them. This will be carefully managed, though, as the birds' well-being and welfare takes priority. The Wydcombe Estate is located at PO38 2NY (grid reference SZ511787).