A human-imprinted Bearded Vulture has 'paired' with its human keeper to become foster parents to a chick.

The male vulture, nicknamed 'Kajazo', recognises humans as its species, having previously lived in a zoo where it was hand reared for too long. However, the bird can still be an excellent foster parent to a chick and is therefore a valuable part of the Bearded Vulture Captive Breeding Network, which breeds the species in captivity for conservation purposes in Catalonia. 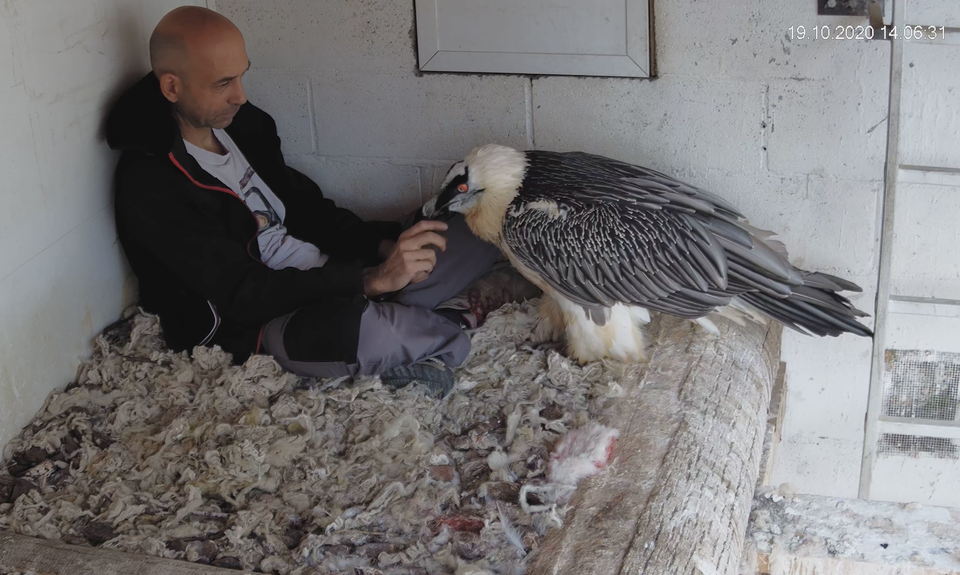 Kajazo and Alex at their 'nest' (Vulture Conservation Foundation).

To act as a foster parent, though, Kajazo needs to go through the entire breeding period with a human 'partner'. Kajazo's keeper, Alex, is the Captive Breeding Vultures Manager at the VCF and the Bearded Vulture EEP Coordinator. On top of these duties, Alex has to spend one hour a day with Kajazo during the breeding period between September to March.

In early autumn, the staff at Vallcallent provide sticks and wool for nest building purposes. Alex and Kajazo built the nest together, and then after a few weeks, a dummy egg is placed in the nest. Both take turns in incubating the clutch since Bearded Vultures share responsibilities in incubation tasks. So, in February or March, when a chick hatches at the centre, it needs to be placed in a Bearded Vulture nest within a week.

Each year a chick is placed into the nest constructed by Kajazo and Alex. Usually, Kajazo accepts the chick and becomes a foster parent and does a wonderful job in raising the chick. At that point Alex stops visiting to avoid human imprinting the new bird. Raising one chick a year, Kajazo plays a valuable role in the reintroduction of the species to the wild.