BBC fund helps to keep albatrosses off the hook

Brazilian conservationists have made a breakthrough in the protection of several species of threatened albatross. Their efforts have shown that, with simple measures, they can cut albatross deaths due to longline fishing hooks tenfold compared to three years ago.

According to figures collated by the Albatross Task Force (ATF) in Brazil in 2007, approximately one albatross was being caught for every 1,000 longline hooks set. But, with the help of the specially trained instructors funded by the BBC Wildlife Fund, this figure can be reduced to just one bird for every 10,000 hooks. 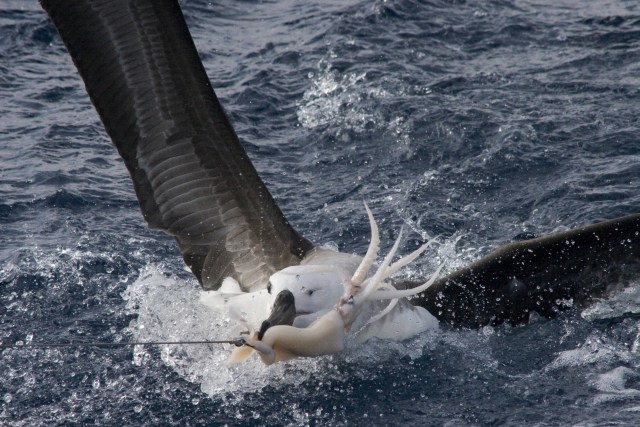 The ATF is co-ordinated by BirdLife International and funded by the RSPB. Tatiana Neves, Director of Projeto Albatroz, the local organisation running the Brazilian ATF, said: "During winter, Brazilian waters teem with albatrosses, including several species facing the threat of extinction. We recognize the importance of Brazilian waters for the birds and, with the support of Brazilian fishermen, are showing the potential for reducing the slaughter by using the right techniques. So far we have proved it's possible to save nine of the ten albatrosses that were dying three years ago, but this success has only been on vessels where we have expert instructors. The next step is to strive for similar levels of success across the fishing fleet operating in Brazil, but based on the dedication of the Task Force and the vital assistance from BBC viewers, we have made a great start."

The Albatross Task Force is encouraging the use of simple, affordable measures within the Brazilian tuna and swordfish fleet. Fishermen are being encouraged to use measures such as bird-scaring lines and weighted hook-lines on their vessels to reduce albatross bycatch. By adding weights, the hooks rapidly sink out of the reach of foraging albatrosses, while the bird-scaring line protects baited hooks for the short time they are at the water's surface. 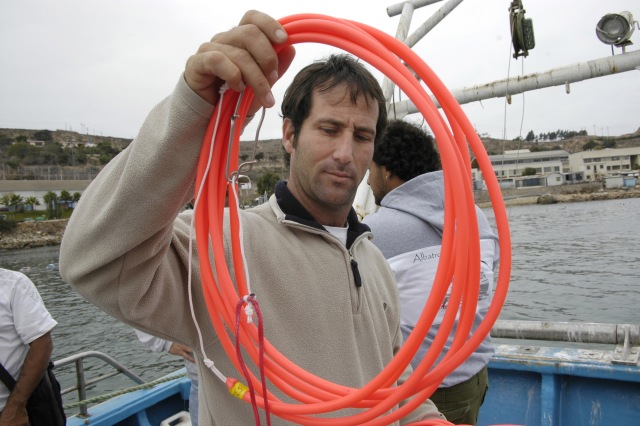 Albatross Task Force instructor Meidad Goren assembling a tori or streamer line. The streamers, made of flourescent tubing, are suspened from the lines, creating a barrier to deter albatrosses from approaching fishing vessels too closely. (Photo: Grahame Madge (rspb-images.com))

The BBC Wildlife Fund is helping to save threatened species and wild places around the world, and since 2007 has given £57,205 in grants to the ATF in Brazil. These funds are being used directly to employ two instructors who are identifying ports and vessels where they should focus their efforts, carrying out technical assessments of fishing gear and assessing seabird bycatch and the impacts of the new technology.

Amy Coyte, Director of the BBC Wildlife Fund, said: "Never has the need to help save species and restore wild places been more urgent. Working with charities taking positive action across the globe we hope to make a real difference for wildlife. I hope everyone will join in and support our appeal, and celebrate the wonder of our natural world through its conservation — whether it's restoring humble habitats for dormice or saving majestic species such as albatrosses."

One of the highlights of the BBC Wildlife Fund appeal will be a live fundraising extravaganza — Wild Night In — on Sunday 20 June, on BBC Two from 8–10pm. All of the money donated by the public will be used to support wildlife conservation, distributed via grants to UK-registered charities involved in conservation work around the world and also on our doorstep.

Wildlife enthusiasts of all ages can take part in the appeal and celebrate the diversity of life on earth. A special fundraising pack, full of ideas of how to go 'Wild for Money' at school, work or home, is available from the BBC Wildlife Fund's website.

BBC Wildlife Fund (BBCWF) was founded by the BBC's Natural History Unit (NHU) in 2007. Following years of producing outstanding films about wildlife throughout the world and at the same time witnessing alarming declines in the populations of many of the animals filmed, the NHU wanted to address the plight of wildlife. The BBCWF was formed, and its first live appeal programme, Saving Planet Earth, raised a total of just under £2 million.

The BBC Wildlife Fund is a grant-making charity, registered with the Charity Commission for England and Wales, number 1119286, and is constituted as a company limited by guarantee, registered number 6238115. Find out more at www.bbc.co.uk/wild and sign up for the Wild newsletter.