The EU's just-agreed 'Baltic Plan' includes measures to stop incidental by-catch of seabirds but fails to close the door on overfishing.

Yesterday the European Parliament, the Council and the European Commission (EC) finalised the negotiations on the multiannual plan for the management of the Baltic Sea cod, sprat and herring stocks — the so-called 'Baltic Plan'.

The Baltic Plan is the first plan under the EC's Common Fisheries Policy (CFP) which aims to ensure that commercial fishing is environmentally, economically and socially sustainable.

During the 10-month negotiations between the EC, the Council (Member States) and the European Parliament there had been disagreements in how to ensure that fisheries management would end overfishing. Despite the efforts of the European Parliament, the final agreement fails to ensure an end to overfishing. The final deal leaves room for loopholes that could still allow fishing quotas to be set at too high levels, thus failing to allow recovery of stocks.

On the other hand the Parliament did manage to include measures to minimise the impacts of fishing on the marine environment in the final agreement, including reducing the accidental catching of seabirds, dolphins, and turtles. These specific important measures had not been included in the original proposal by the EC. 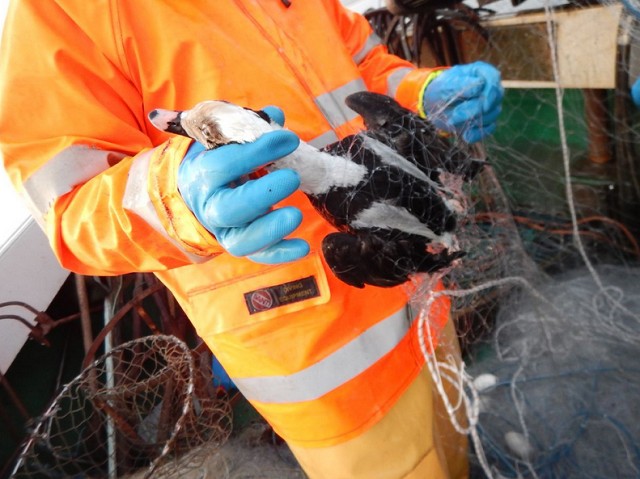 This Long-tailed Duck was found drowned in fishing nets; the species' numbers in the region have declined rapidly during the last two censuses (Anetta Ameryk/Morski Instytut Rybacki)

The Baltic Sea is a well-known hot-spot for by-catch of seabirds with about 90,000 seabirds — mainly marine diving ducks — drowning every year, after being accidentally trapped in fishing nets.

Ariel Brunner, Senior Head of Policy at BirdLife Europe, said: "The important progress in tackling seabird by-catch does not compensate for [the] backtracking on fishing quotas. It is shocking that the first plan implementing the new Common Fisheries Policy is already betraying the promise to end overfishing."

Member States have now been tasked to put regional technical measures for the Baltic in place. BirdLife Europe will closely follow the process to ensure the freshly provided loopholes are not used when setting the annual catch limits in October. The organisation hopes that the upcoming fisheries management plan for the North Sea does not make these same mistakes.