Throughout history, Northern Bald Ibis has had a turbulent relationship with humans. This mythical bird with its punk-like crest once had an extensive range across North Africa, the Middle East and Europe, and has been idolised by humans as symbols of fertility and virtue, and even mummified to accompany ancient Egyptian royalty.

However, it has lost its feeding areas to land-use changes, its nest sites have been built on or disturbed, and it has also been poisoned by pesticides, hunted, persecuted, and collected in a gold rush for museums. On top of this, a dramatic range reduction resulted in an all-time population low at the end of the 20th century, with just 59 breeding pairs remaining in 1997. Today, almost all remaining wild birds are restricted to Morocco.

Now, wardens are being co-ordinated by Souss-Massa National Park and trained to prevent disturbance of the ibises at the colony and surrounding fields, where they feed on lizards, scorpions and beetles. They also provide safe drinking water and see off any threats to this social and easily spooked species.

The wardens’ work has substantially boosted the global population of wild Northern Bald Ibises in recent years, bringing it up to 600 birds for the first time in modern history, thanks to long-lasting commitment from BirdLife, and recently, to GREPOM (BirdLife in Morocco) and the Moroccan government protecting colonies at Souss-Massa National Park, as well as a smaller site at Tamri. GREPOM have also undertaken public awareness work to help raise the profile of this important species.

“With great co-operation between BirdLife and the Moroccan government, the colonies started to look crowded,” said Chris Bowden, AEWA Co-ordinator for the species on behalf of BirdLife. “Perhaps along the coast a new colony would form.” However, with better official protection still needed for the colony at Tamri, for example, nothing can be certain for a species that has been listed in the highest category of threat on the Red List for more than 30 years. 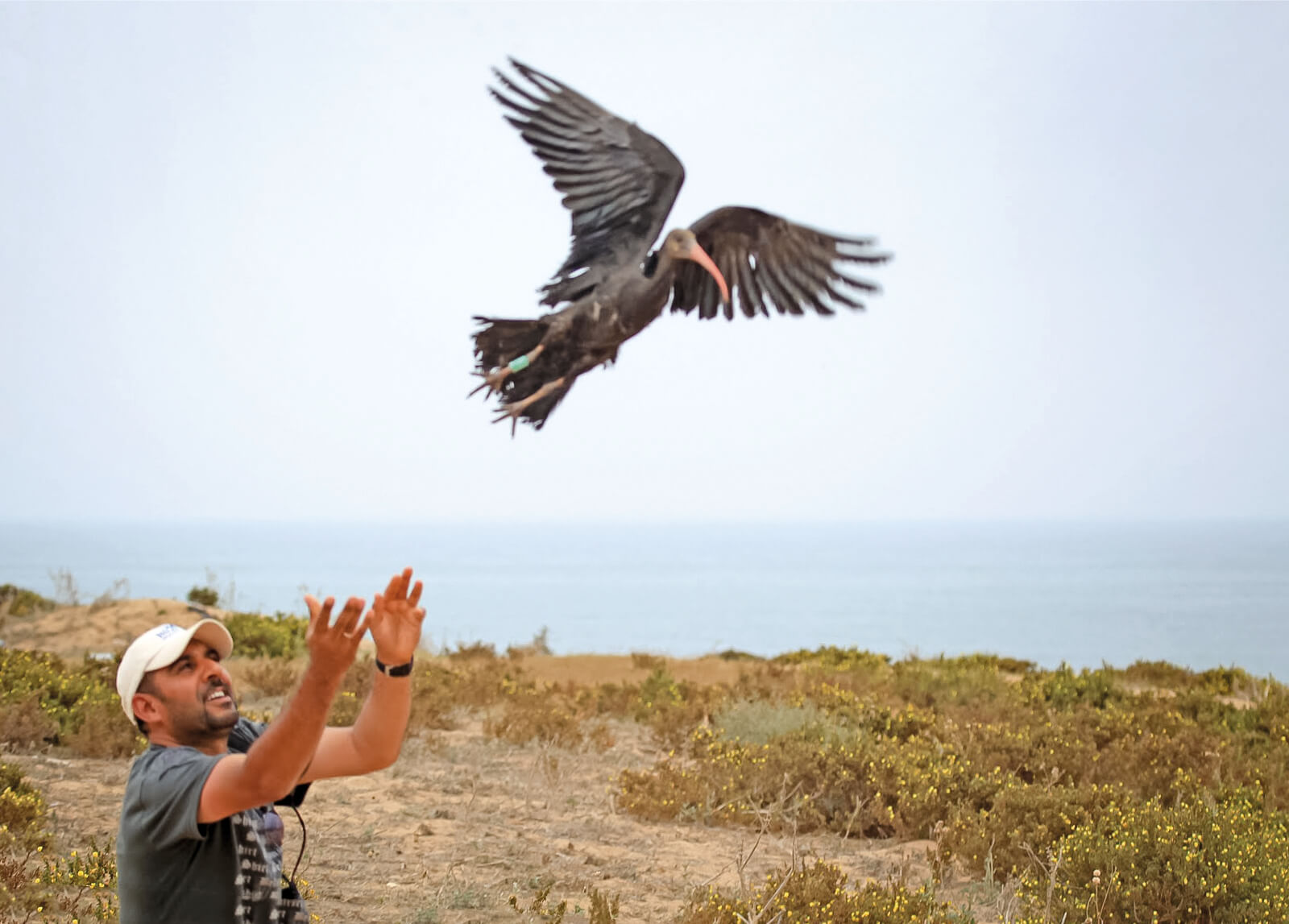 Last year a few tentative reports came in, and then “we found what we’d been waiting for: a new colony,” said Halima Bousadik of GREPOM. During the 2017 breeding season, two new nesting sites were discovered on two separate coastal cliffs north of Tamri, with adults incubating at least three active nests and totalling a new record of 122 wild breeding pairs.

“The importance of this news is that, with a steady population increase, Northern Bald Ibis is now exiting its ‘comfort zone’ of the guarded sites, giving us a lot of hope for more similar discoveries,” said Jorge F Orueta, SEO (BirdLife in Spain), who has worked on the species since the year 2000. “We now need to check all suitable sites in the region and implement a GPS tracking programme to learn their movements.”

The wild Moroccan birds are those remaining from a western population that used to range throughout north-west Africa, but is now restricted to wandering locally. This year, a flock of 11-15 ibises was also seen at the northern edge of the known breeding range. But what of the historical eastern population?

A semi-wild but substantial breeding colony still exists at Birecik, Turkey. These birds are in a 'catch-22' situation, because they need to be fully released so their migratory habits are restored, but at the start of winter a team led by the Turkish government has to put them in captivity, otherwise they might be subject to illegal hunting in Syria or further south in Arabia. When they are free to roam in the summer, the birds also face threats of disturbance, electrocution or collision with powerlines.

The Syrian conflict has brought added complications, increased disturbance and the possibility of persecution, as large numbers of refugees have settled in around Birecik (more than 400,000 in Urfa Province at present), occupying areas used by feeding ibises.

However, one Syrian refugee, a warden who worked with a small relict Northern Bald Ibis colony in Syria, has joined Doğa Derneği (BirdLife in Turkey), where his unique situation may be the key to protecting ibises once more. Also, with conservation programmes to control threats and return the birds to their fully wild status, there is no reason why this eastern population should not eventually roam free once again, hopefully remembering their migration route to Ethiopia. Sadly, though, for the one wild female and the handful of Syrian birds that remained in captivity in Palmyra, the faint light of hope for them is likely extinguished.

Elsewhere, in the Austrian Alps and southern Spain, two separate reintroduction programmes have released substantial numbers of captive-reared birds in the hope they establish themselves in Europe.

So, while all wild Northern Bald Ibis are probably now to be found in Morocco, the species’ conservation is once again becoming an international effort. Hope is far from lost for the Turkish population, and many countries are joining the effort across the bird’s historical range, with financial and technical support coming through SEO/BirdLife, the RSPB (BirdLife in the UK), SVS-BirdLife Switzerland and VBN (BirdLife in The Netherlands). The work is carried out in Morocco with the High Commission for Water and Forest and Fight Against Desertification (a government department in Morocco).

The Northern Bald Ibis International Working Group has just held its second ever meeting, as part of the Agreement on the Conservation of African-Eurasian Migratory Waterbirds (AEWA). Held in Sous Massa, attendee conservationists from all ibis territories are now equipped with an updated International Single Species Action Plan to continue the trend.

With news of new colonies and a new phase in ibis conservation, perhaps history will repeat itself and the Northern Bald Ibis will once again be idolised throughout North Africa, the Middle East and Europe.