An odd songbird with a bald head living in a rugged region in Laos has been discovered by scientists from the Wildlife Conservation Society and University of Melbourne, as part of a project funded and managed by the mining company MMG (Minerals and Metals Group) that operates the Sepon copper and gold project in the region. Dubbed the Bare-faced Bulbul because of the lack of feathers on its face and part of its head, it is the only example of a bald songbird in mainland Asia according to scientists. It is the first new species of bulbul — a family of about 130 species — described in Asia in over 100 years. 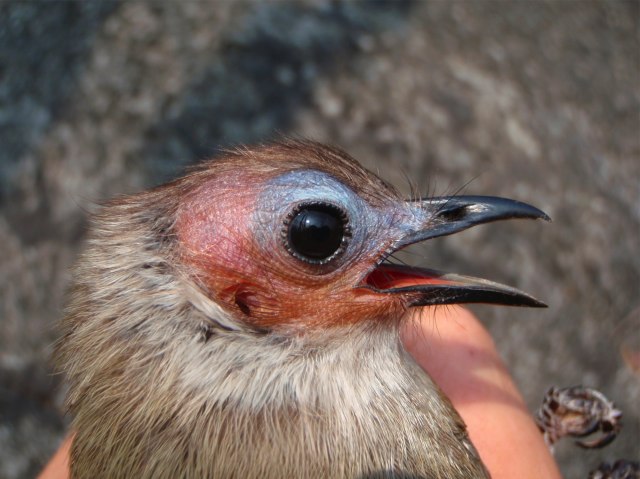 A description of the new species is published in the July issue of the Oriental Bird Club's journal Forktail. Authors include Iain Woxvold of the University of Melbourne, along with Wildlife Conservation Society researchers Will Duckworth and Rob Timmins.

"It's always exciting to discover a new species, but this one is especially unique because it is the only bald songbird in Asia," said Colin Poole, director of Asia programs for the Wildlife Conservation Society. "The discovery also underscores how much there is still to learn from wild places around the world. I am proud to report that news of this remarkable ornithological discovery, like that of the Calayan Rail in 2004, was made public through the pages of the Oriental Bird Club's scientific journal Forktail," commented Brian Sykes, Chairman of OBC.

The thrush-sized bird is greenish-olive with a light-colored breast, a distinctive featherless, pink face with bluish skin around the eye extending to the bill and a narrow line of hair-like feathers down the centre of the crown. The bird seems to be primarily tree-dwelling and was found in an area of sparse forest on rugged limestone karsts — a little-visited habitat known for unusual wildlife discoveries.

"Its apparent restriction to rather inhospitable habitat helps to explain why such an extraordinary bird with conspicuous habits and a distinctive call has remained unnoticed for so long," said Iain Woxvold of the University of Melbourne. Fortunately much of the bird's presumed habitat falls within legally protected areas in Laos. However, quarrying of limestone looms as a potential threat to wildlife in this area, along with habitat conversion for agriculture.