The three parents share incubation responsibilities at the site in the Upper Mississippi River National Wildlife Refuge near Fulton, Illinois, and the history of the birds, particularly the two males, goes back several years. Male 'Valor 1' was young when he was spotted at the nest site in 2012. He was the presumed father of that year's two eggs, but he wasn't helpful at incubation or feeding the young, and both eaglets died. In 2013, two males hung out at the nest, with a new bird – 'Valor 2' – seemingly replacing Valor 1, producing two young with female 'Hope'. 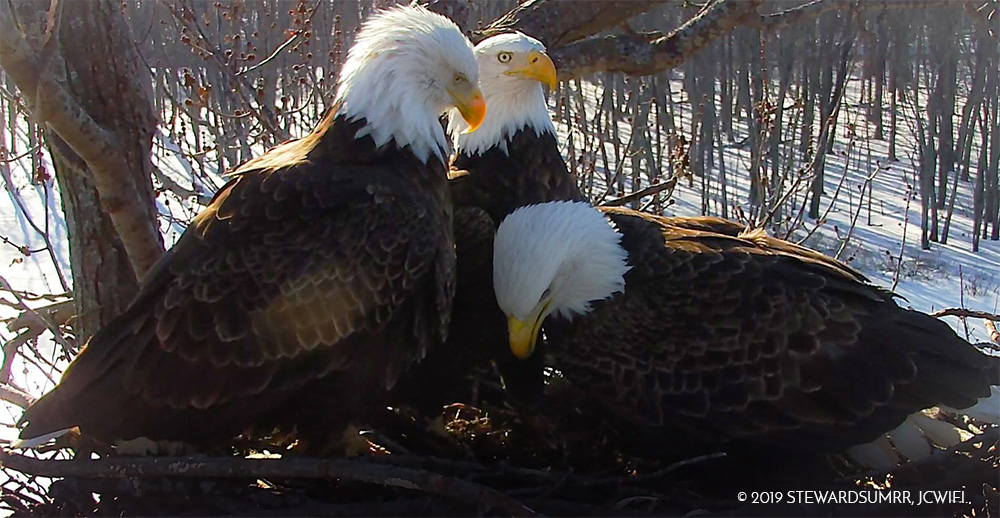 In 2014 vegetation obscured the nest, but three adults appeared to be tending the young. In 2015, three adults were clearly seen tending the nest: Valor 1, Valor 2, and Hope. With such behaviour being very unusual in Bald Eagles, stewards of the Upper Mississippi River Refuge installed a nest camera and, in 2016, it was clearly documented that both males were copulating with Hope, and all three shared in incubation, nest maintenance, and feeding the young. Three eaglets fledged that year.

Valor 1 and 2 males have either proven faithful to their nest or indeed to each other, despite the departure of Hope. Such a nesting trio is very rare among Bald Eagles but this isn't the first time it's been documented: cases were also recorded in Alaska in 1977, Minnesota in 1983 and California in 1992, among others. However, on each occasion is wasn't clear if all three were in fact parents, so the current arrangement in Illinois could well be unique.

You can find out more and watch a live webcam of the eagles here.