Conservation scientists from the RSPB and BirdLife International have discovered that there was a massive loss of forest in Important Biodiversity Areas recently.

The two conservation organisations, along with colleagues in Italy assessed satellite data to measure forest loss in 7,000 key sites for nature from 2000-2012. Trees covered around 1.8 million square miles of land in these IBAs in 2000, but had decreased by around 45,360 square miles — an area roughly the size of Scotland — by 2012, a 2.5 per cent loss across all IBAs.

Key countries with highest forest loss were Brazil, Paraguay, Indonesia, Malaysia, Madagascar and Ghana, and there were also major losses in South America and South-East Asia.

"It is the biodiverse tropics which are again suffering most," said Dr Graeme Buchanan, senior conservation scientist at the RSPB Centre for Conservation Science and a co-author of the study.

In the new study, scientists used satellite imagery to measure forest canopy loss remotely across the global network of Important Bird and Biodiversity Areas (IBAs). They quantified the loss between 2000 and 2012 across 7,279 of the world’s IBAs that support forest bird species.

These losses were not uniform, with most IBAs losing less than 1 per cent of their forest cover over the period. However, a small number of sites suffered severe levels of deforestation, including Salta Forest, Argentina (a 72 per cent loss), Rawa Lunang, Indonesia (69 per cent) and Tesso Nilo, Indonesia (65 per cent).

The authors discovered some significant patterns. The fastest rates of forest loss in IBAs were found in South America and South-East Asia, with losses accelerating notably between 2003 and 2007. Encouragingly, however, formal protection of IBAs such as by designation as a national park or wildlife reserve appears to be associated with lower rates of forest loss. 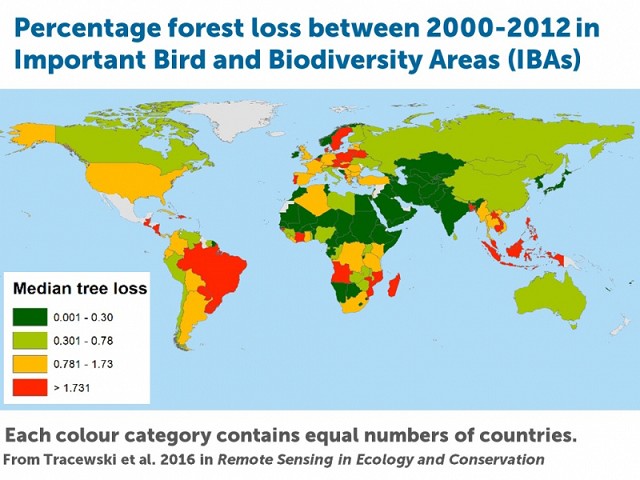 "It’s now possible to monitor changes in forest cover over all of the planet’s IBAs. As these areas form the majority of currently known sites of global importance for the persistence of biodiversity, their future conservation is of paramount importance," said Dr Graeme Buchanan, senior conservation scientist at the RSPB Centre for Conservation Science and a co-author of the study.

"Indeed, the world’s governments have committed to protecting at least 17 per cent of land by 2020, with a particular focus on areas ... such as IBAs. Citizens now have a way to monitor the progress to this target from a computer anywhere in the world, making the task of holding our governments to task on these pledges more immediate and manageable."

Another co-author, Dr Stuart Butchart, added "We will be making these data and annual updates in future readily available to BirdLife Partners across the world, so that they can focus their conservation efforts most effectively on the forest IBAs most vulnerable to rapid deforestation."