Appeal for information on Little Bustard shot in Norfolk

Norfolk Police and the RSPB have appealed for anyone with any information about the shooting of a Little Bustard in Norfolk last month to come forward.

The bird was discovered dead on a road close to the village of Blofield, five miles from Norwich, on 22nd January and the RSPB and Norfolk Police were informed. A post-mortem veterinary examination found that the bird had very recently been shot with a shotgun, and that this had caused its death. 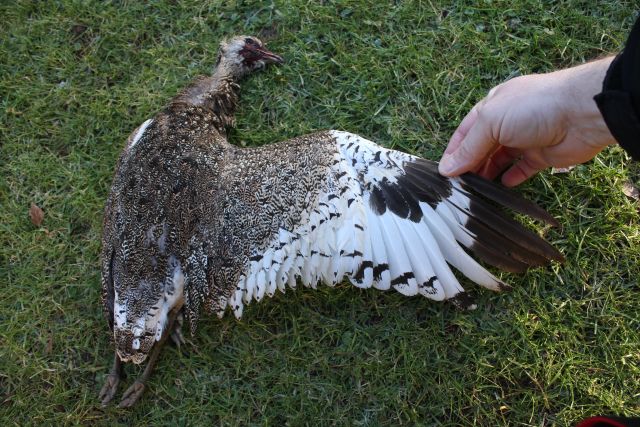 Little Bustard is a pheasant-sized member of the bustard family, native to the grassland plains of the steppe in southern Europe and Asia. Although there is a breeding population in France it is a very rare vagrant to the UK, though this winter has produced an impressive influx with three further British sightings (in Dorset, East Sussex and East Yorkshire) in addition to the individual shot in East Norfolk. A number of records have also come from the near-Continent since the end of last summer.

Mark Thomas, Senior Investigations Officer with the RSPB, said: "Little Bustards are protected at all times of year and are the focus of intensive conservation efforts in the countries where they breed. Evidence suggests that this bird is likely to have died very close to the location where it was shot although it is unknown how it ended up on a road near Blofield."

Inspector Jon Papworth, of Norfolk Constabulary, added: "It is a crime to intentionally shoot a Little Bustard, as it is with all protected birds. We are keen to hear from anyone who knows the circumstances of what happened in this case."

Please contact Inspector Papworth by calling Norfolk Police on the non-emergency number of 101.