Bird movements can now be visualised in a new way after the release of the upgraded EuroBirdPortal (EBP) online viewer which shows animated maps of the migration of 105 European bird species.

The new version of the viewer, updated with 40 million new bird records collected in 2016, now shows animated year-round maps of 105 bird species for a period of seven years, making it the largest and most dynamic citizen science biodiversity data set in Europe.

The improved version of the viewer incorporates a new design and several new features, including zooming and embedding options. Moreover, the extension of the area covered by the maps has increased markedly thanks to the incorporation of data from Bulgaria, Cyprus, Estonia, Greece, Hungary, Israel, Romania and Turkey.

EBP allows two migrant species to be compared side by side, in this case Barn Swallow and House Martin (EBP data).

Gabriel Gargallo, EBP project co-ordinator, said: "We hope that the new improved version of the EBP viewer will highlight the value of the data collected through the online bird portals operating across Europe, and the relevance of sharing bird observations. EBP's main objective is to unravel the seasonal distribution patterns of European birds, but this is only possible thanks to the contributions of over 100,000 volunteer birdwatchers that share their observations through online portals, and by the efforts of EBP partners to collate this huge amount of data in a sound and structured way.

"Thanks to these combined efforts we are in a better position to understand changes in bird migration patterns, like the new route followed by [Common] Cranes in southern Europe, or the influence of weather and climate on bird migration."

Stephen Baillie, Senior Research Fellow at the British Trust for Ornithology (BTO) and one of the leaders of the EBP team, said: "Most European bird populations are migratory and many of these migration patterns are changing rapidly, particularly in relation to climate change. We need to understand how and why bird distributions change throughout the year in order to underpin sound conservation and management. The information being made available through EuroBirdPortal will make a crucial contribution to achieving these objectives."

Scott Mayson, BirdTrack Organiser at the BTO, added: "It is great to be involved in this amazing partnership and it is testament to how the records added to BirdTrack by regular birdwatchers can become part of wide reaching projects such as this and help us understand more about how our birds are faring." 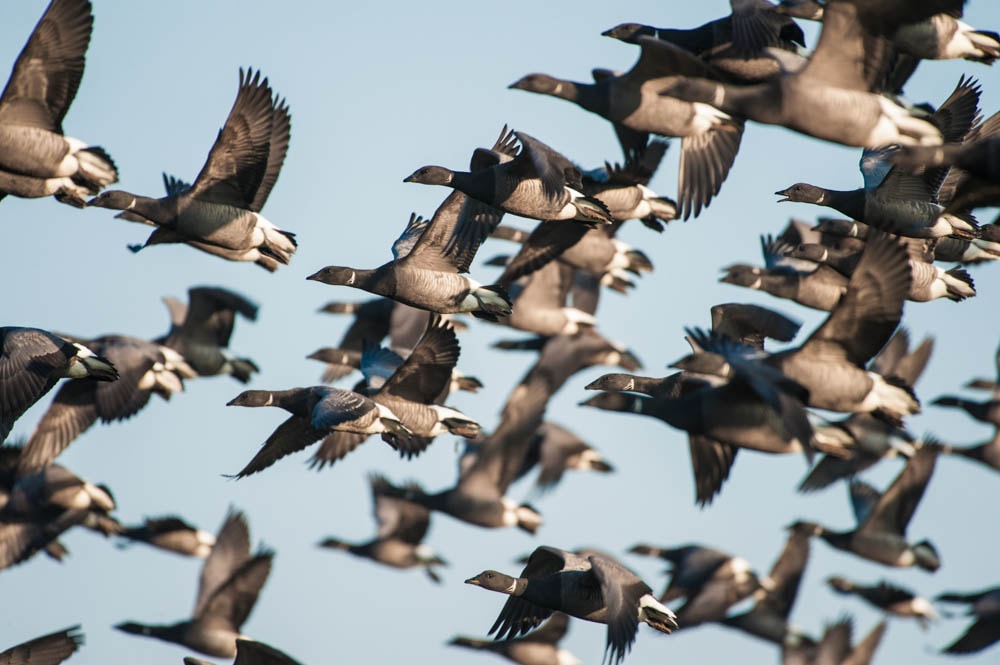 As well as tracking the arrivals of summer migrants, EBP also allows users to follow the progress of wintering species such as Brent Goose (Keith Chapman).

The main purpose of EBP is to combine the data collected by the different online bird recording portals operating in Europe, in order to describe the large-scale seasonal distributional changes and migratory patterns that are seen in Europe's birds, and how this might change over time. This research is of wide interest in its own right and has important implications for the conservation and management of European bird populations.

The EBP demo viewer aims to show the scope and potential of the project depicting the week-by-week distribution patterns of 105 bird species using a total of nine types of species maps together with maps of climate variables. Since two animated maps of any type and year can be displayed simultaneously a total of more than 30 million different map combinations are currently available to choose from.