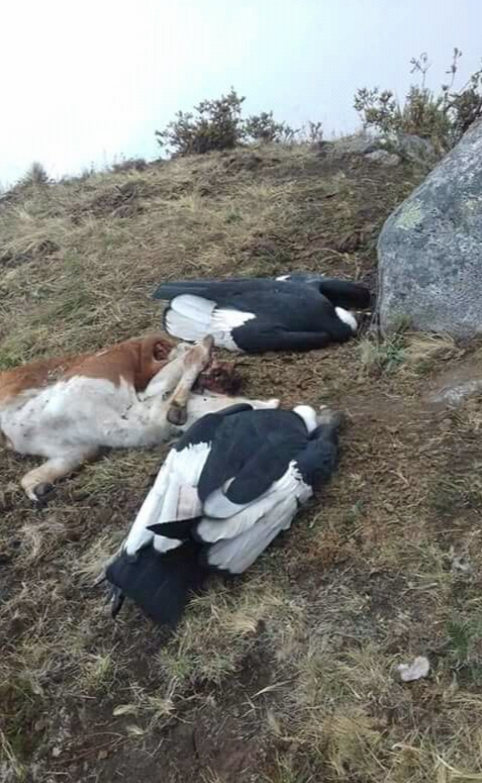 After last week’s large-scale poisoning of Andean Condors in Argentina was found to have been caused by Carbofuran, the Vulture Conservation Foundation (VCF) has reported another case of poisoning, this time from Colombia. Two condors were found dead in the country, where only around 100 individuals remain in the wild.

Poison is the biggest threat to vultures worldwide. This was the main conclusion of the Vulture Multi-species Action Plan, which was co-developed by VCF and has been recently endorsed by the Convention for Migratory Species (CMS). A significant part of this global action plan for vultures focuses on the fighting this threat.

In Europe, VCF is actively pursuing different lines to these ends, including a brand new project in the Balkans, where the organisation will be working and funding local partners in Croatia, Albania, Bosnia-Herzegovina, Macedonia and Greece to try to eradicate this illegal and highly damaging practice.

In South America, Fundación Bioandina Argentina (FBA), which is leading the Andean Condor Conservation Program of Argentina, is implementing similar actions, as cases of poisoning have grown exponentially. In the last 13 months, at least 66 condors were killed by poison in several provinces of the country.

Carbofuran is banned in Europe, but it is still widely used in Argentina. In this latest case, two suspects – local livestock farmers – have been detained, and may incur fines and a prison sentence if found guilty.

FBA is fighting the threat on several levels in Argentina, including research into the illegal use of toxic baits and their impact on wildlife conservation and human health, and educational campaigns and surveys to livestock farmers to find out if they use poison, which poison they use and why they apply it. The organisation has been sending information on all poison cases to the national authorities and the courts, while also working to mitigate conflict between predators and domestic livestock, which is often at the root of poison incidents. Additionally, it is leading a campaign for authorities to adopt new legislation that makes it easier to track the sale and usage of agrochemicals. Currently, tons of these products circulate in Argentina and no one knows where they are. A petition has been set up campaigning for a law of agrochemical traceability to be introduced, and you can sign it here.

The FBA has been working for more than 26 years for the protection of Andean Condor, including the releasing of captive-bred birds and the rescuing and rehabilitation of injured birds. They have so far treated 260 condors from all over Argentina. Most of these birds have been rehabilitated and reintroduced back into their natural environment.