BirdWatch Ireland is pleased to announce the appointment of Alan Lauder as its Chief Executive. Alan will take up the post in January 2011, and will be based at BirdWatch Ireland's headquarters in Kilcoole, Co Wicklow.

Alan Lauder is no stranger to BirdWatch Ireland, having served as its Head of Conservation since 2008. Before that he worked in Scotland as Regional Reserves Manager for RSPB, following a period as the first head of BTO Scotland. He is a dedicated conservationist, with a keen interest in ornithology and natural history. 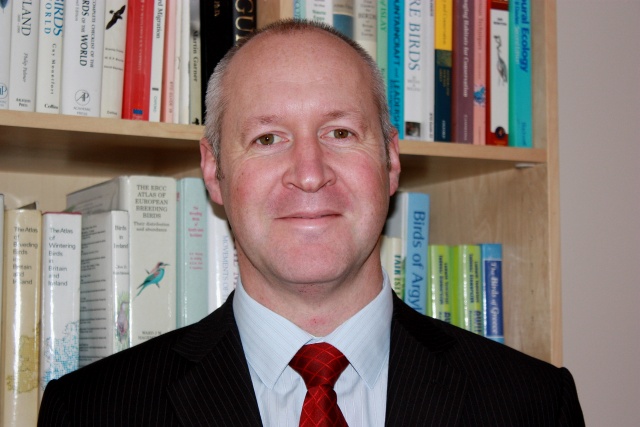 Commenting on his appointment, Mr. Lauder said: "I am very excited to have the opportunity to lead this fantastic organisation, full of skilled staff, dedicated volunteers and enthusiastic supporters, into the future. I am committed to putting BirdWatch Ireland at the heart of securing a strong future both for our birds and for our other wildlife, as well as to helping people understand the value of Ireland's unique flora and fauna. Our natural heritage should be a key tool in securing a sound economy based on a sustainable environment, as well being cherished for its own sake and as a source of huge enjoyment, both for people living in Ireland and for tourists visiting our country."

John Cromie, Chairman of BirdWatch Ireland, commenting on Alan's appointment said: "On behalf of BirdWatch Ireland, I am delighted to welcome Alan Lauder to his new role at the helm of Ireland's leading nature conservation organisation. Big challenges lie ahead for BirdWatch Ireland as we strive to protect and enhance not just Ireland's wild birdlife but also our wider natural heritage, in the face of economic uncertainty and at a time when Ireland's people need to value their natural environment and its wildlife more than ever. Our new strategy, 2020 Vision, announced earlier this year, addresses this head-on, with practical plans and objectives set in the context of a clear long-term vision for nature in Ireland. Alan and his team will be at the forefront in implementing these ambitious plans, and we wish him well."