New research has highlighted the need for urgent action to transform the fortunes of one of Scotland’s fastest declining farmland birds. Once widespread across Britain, the Corn Bunting is now rare in Scotland, with only 800 breeding pairs confined to parts of the eastern lowlands and the Western Isles. Over a 20-year period, an Aberdeenshire population of this multiple-brooded crop-nesting bird declined by 91% from 134 pairs to just 12. The joint study by RSPB Scotland and Dr Adam Watson, recently published in the journal Ibis, found that gradual changes in crop management, particularly an increase in field size and decrease in weed abundance, reduced the availability of safe nesting sites and food sources the species depends on.

As cereal crops have become less weedy, more Corn Buntings may now be nesting in grass silage fields, where they are especially vulnerable to harvesting operations. Researchers also determined that the increase in field size reduced the availability of insect-rich field edge habitats and elevated songposts, such as fences, that males use when establishing and defending territories. Dr Adam Watson, who monitored the Corn Bunting population in each year of the 20-year study, said: "When I first studied this population in 1989 it was thriving, and I saw winter flocks hundreds strong. Last summer we only found one pair, which failed to rear any chicks. To me in 2012, the familiar farmlands seem silent and empty. It is tragic." 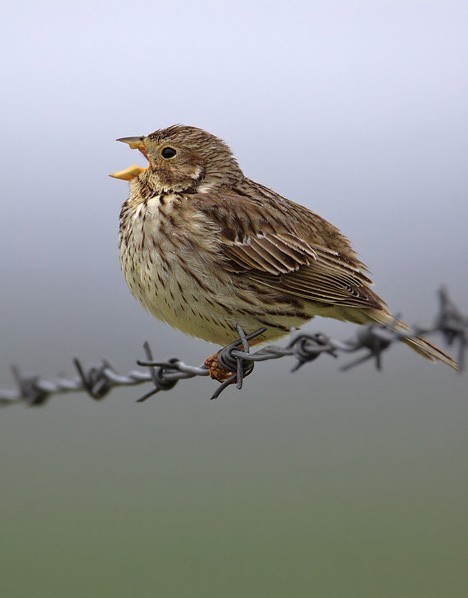 Allan Perkins, RSPB Scotland Conservation Scientist, said: "Intensive crop management and removal of field boundaries, resulting in fewer weeds and the insects they support, together with earlier harvesting of cereals and mowing of grass has had a detrimental effect on the Corn Bunting. This is a species that favours low-intensity farming and it is vital that such systems are preserved, or habitats replicated through agri-environment schemes." A study published last year in the Journal of Applied Ecology demonstrated that agricultural grant schemes, when targeted effectively, had a positive impact on Corn Buntings.

Amy Corrigan, RSPB Scotland’s Agriculture and Rural Development Policy Officer, said: "Thanks to good ecological research like this we know exactly what is needed to save the Corn Bunting in Scotland, and we have the agri-environment schemes and farmers capable of delivering it. However, we currently face the prospect of a lengthy gap in funding for agri-environment schemes due to ongoing negotiations in Europe on the CAP. A break in schemes would be extremely detrimental to conservation effort directed at this once common farmland bird. We hope the Scottish Government will demonstrate its commitment to addressing biodiversity declines, and indeed the livelihoods of those farmers working hard for nature, by ensuring schemes critical to the conservation of vulnerable species like Corn Bunting can continue during this period of financial uncertainty. Scottish Government are currently consulting on their 2020 Challenge for Scotland's Biodiversity. In it they recognise the need to develop a conservation programme for priority farmland species in a parlous state. We agree and suggest that the Corn Bunting should be a priority species for this programme."