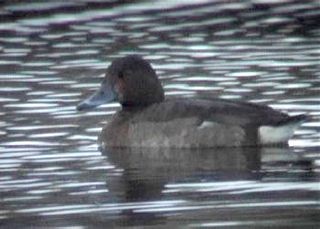 This bird was identified by several experienced observers on Sunday 10th November as a female type hybrid, probably a Pochard/Ferruginous. It is the same size as a Pochard, has pale feathering at the base of the bill in a pattern similar to female Pochard. The bill has a broad black tip with a grey sub-terminal band, i.e. NOT a neatly defined black nail on the bill tip as in Ferruginous. The brown breast contrasts obviously with the grey-brown flanks, which show some evidence of grey vermiculations in dull light.