My name is Paul B Jones and I'm an amateur wildlife photographer living in Ottawa, Canada. I usually throw my middle initial in to narrow the field down a bit (there are a lot of Joneses in the world). From my early teens I was an avid birder, chasing lists all over Canada. Recently I have concentrated more on photography. The knowledge about bird behaviour I learned as a birder is incredibly useful for securing wildlife images. The other thing that helps is good equipment. Coming to the hobby late with a long-established day job means I can shell out for some fancy lenses. What I do not have is great mastery of the technical aspects of photography. Cameras are very complex these days, as is the work involved in processing images once you have taken them. There is always more to learn! I hope you enjoy the winter bird photos I have selected. More of my photographs can be viewed at www.flickr.com/photos/paulbjones/albums. 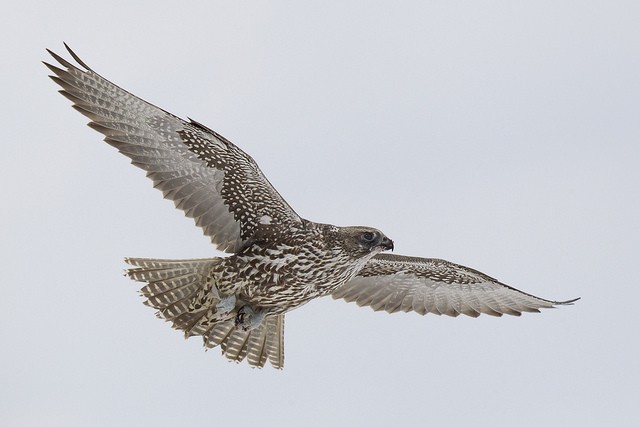 This was a very exciting encounter with a rare and spectacular bird. My wife and I were out for a drive in the fields east of Ottawa searching for Snowy Owls. I looked out the window and saw two large birds engaged in a prolonged chase. Pulling over and hoping for the best, I figured it could be a Peregrine after a gull — but I didn't want to jump to conclusions. A better look with binoculars revealed a modest face pattern and dark underwing coverts — not a Peregrine, a Gyr! Gyrfalcons are rare in Canada anywhere south of 60 degrees but they do occasionally show up in winter. For photographic purposes it helps that, like many other northern birds, they are quite tame. I was able to approach this one to a decent distance as it feed on the gull it had captured. When a Red-tailed Hawk flushed it off its meal, the Gyr circled around me several times until, with my help, it was able to regain possession of its prey. 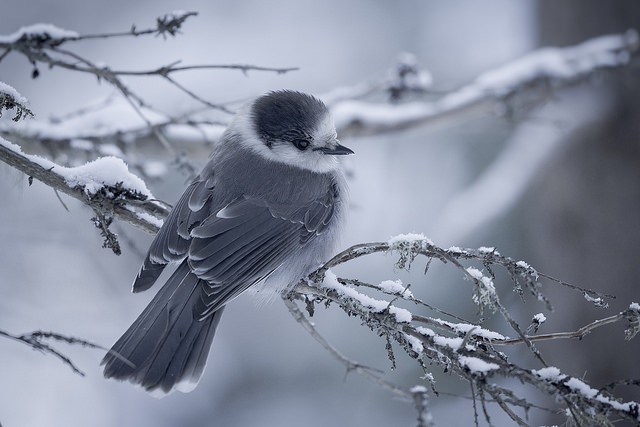 It was a cold February morning (–35 degrees Celsius) along the Spruce Bog Trail in Canada's Algonquin Park. This Gray Jay celebrated the moment by gathering nesting material; it is not too long until they start raising a family, even in sub-zero temperatures. Gray Jays are one of my favourite birds. Fluffy and friendly but also tough as nails, they have a long history of habiting with humans, earning them the names Lumberjack, Meat-bird, Camp Robber, Venison-Hawk, Moose-bird and especially Whiskeyjack, a version of Wiskedjak, Whiskachon and Wisakadjak, the mischievous prankster prominent in indigenous Algonquin mythology. 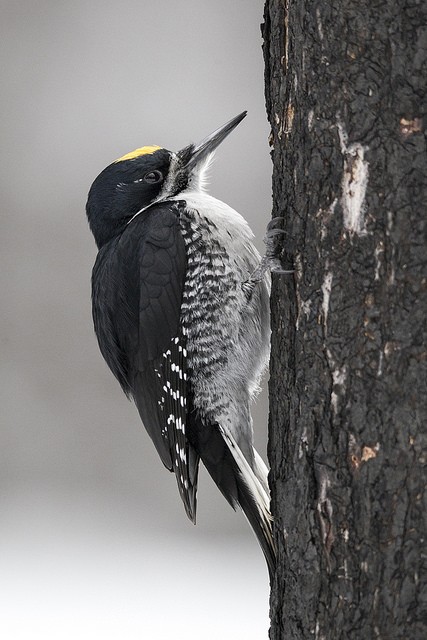 The Timmins 9 fire started on 20 May 2012 and burned through to early October of the same year, consuming more than 530 square kilometres of forest across 70 km of northern Canada. By the winter of 2014 life was pouring back into the area, notably in the form of Black-backed and American Three-toed Woodpeckers. These boreal forest species thrive among the dead trees left behind by forest fires, feeding on the abundant insect larvae in the decaying wood. Both woodpeckers are incredibly tame, allowing extraordinary close approach and excellent opportunities for photographs — thus warranting a special expedition to the site. 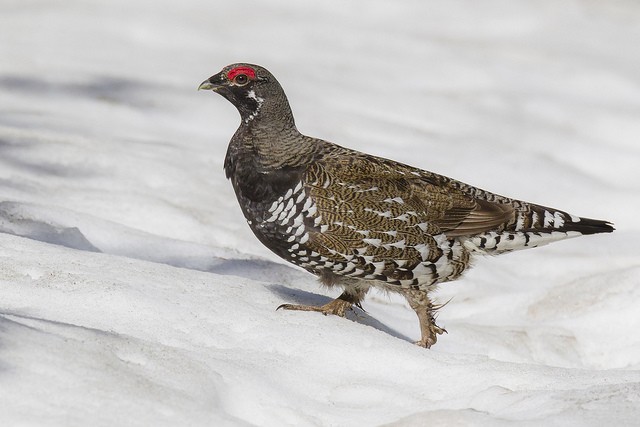 Another emblematic resident of Canada's boreal forest is Spruce Grouse. They feed on spruce needles and apparently taste like turpentine, rendering them an unpopular target for hunters and thus very unwary of humans. They like to sit motionless for long periods of time, making them difficult to find. If you do come across one, though, they are very cooperative subjects for photography. 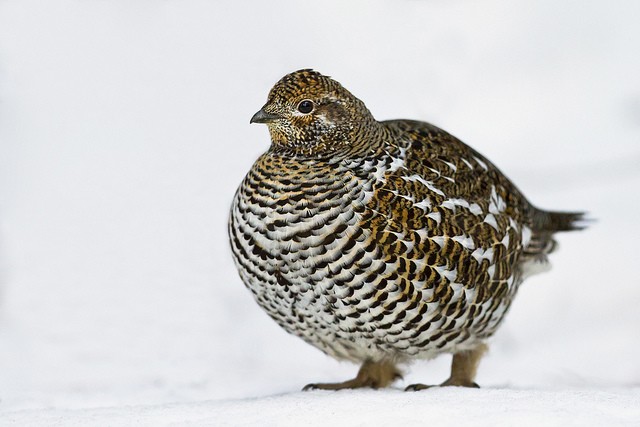 Here is the female of the species, beautifully but more cryptically plumaged than the male. One of the things I have learned about photography is that images shot on the same level as the bird often look nicer than ones shot down at an angle. When this grouse walked out in front of me, I dropped on the ground and began taking pictures. Snow might be cold, but it is a relatively soft. 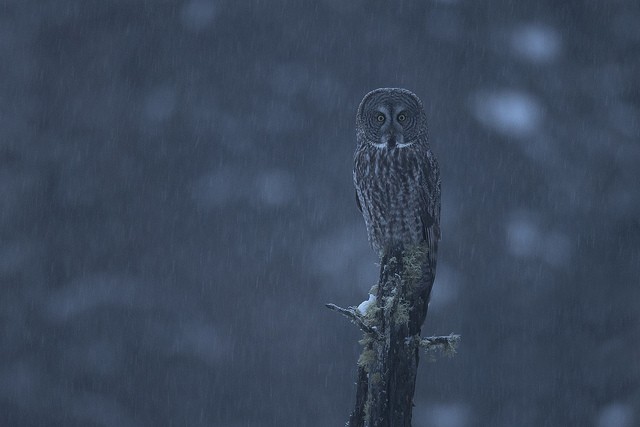 The small-rodent population across northern Canada is cyclical, building up over a few years and then collapsing. When there is a downturn, the Boreal [Tengmalm's], Hawk and Great Grey Owls that feed on these animals began to head south in the fall, desperate to find food. In December this charismatic trio can appear in the Ottawa valley, to the great joy of photographers. Many of the most spectacular images you see of them are produced by baiting the birds with live mice, something I am not willing to do.

When Great Greys are food-stressed, they will hunt all day out in the open. This bird was active in the evening — perhaps an indication it was finding plenty to eat. When I came across the owl it was dark and snowing and I could make out virtually no details on the bird. Modern camera technology allowed me to pull this image out of the gloom. 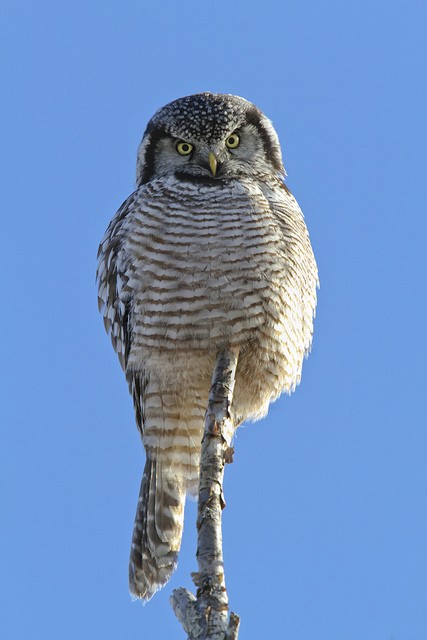 This photograph is from the winter of 2010, taken in the small town of Moose Creek to the east of Ottawa, Canada. This owl spent early January to late March in basically the same tree (next to a busy railroad track) unharmed by the many photographers who respectfully came to visit. As photographers, our first priority has to be the health and safety of the subject, not getting the shot. Sometimes our community isn't as careful as it should be, but in this case everyone was pretty well behaved. 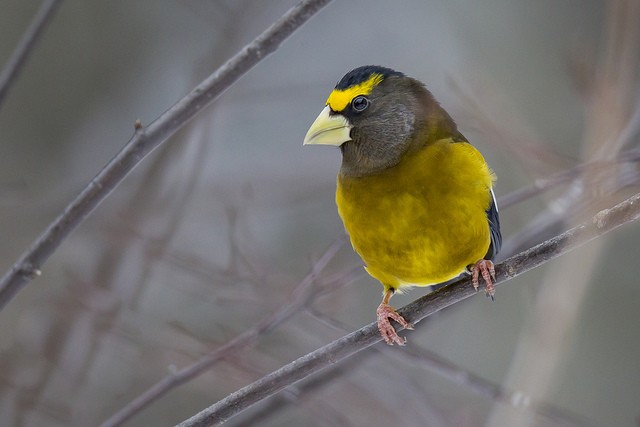 Does Canada have any colourful birds? Yes, the winter finches which roam across the snowy north can brighten things up on the coldest day. Evening Grosbeak is one of the most attractive of the bunch. 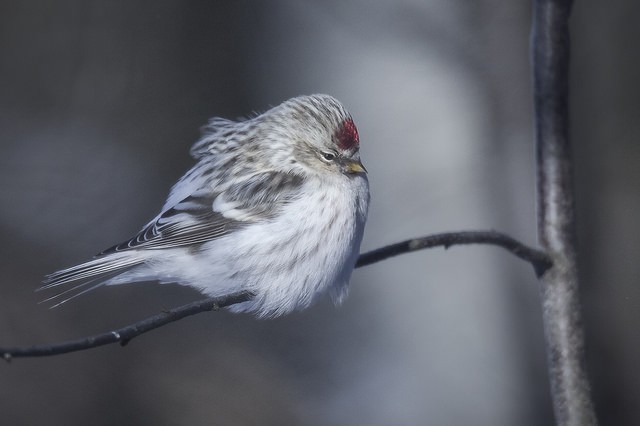 It is always a treat to find a ghostly Hoary Redpoll among the more numerous and darker-streaked Common Redpolls. But picking one out can sometimes be tricky; there is a large range of individual variation within the various redpoll species and subspecies (if they even are actual species at all). Fortunately, this individual scored very nicely on all the key marks for Hoary including overall pale appearance, unstreaked rump and small "pinched in" bill. 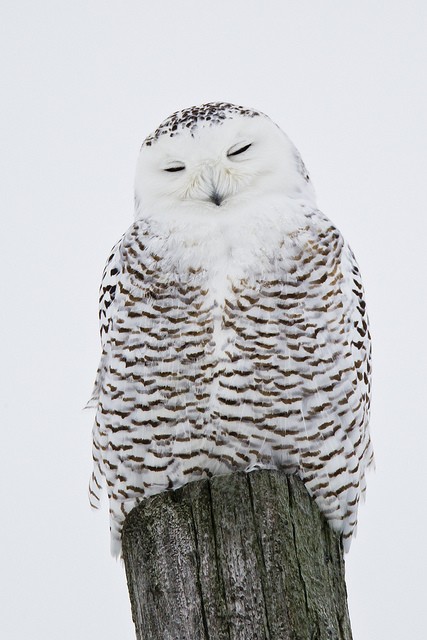 Ookpik in the language of the Inuit, Harfang des neiges in French and Snowy Owl in English, this is one of the great birds of the world. An Arctic nester, they appear in southern Canada from late October on, their numbers depending on the food supply up north. If the Lemming population above the tree line is high, then few Snowies will make the journey south. If all the lemmings have jumped off a cliff, then the owl can appear in great abundance across southern Canada. Snowies are warier than most northern birds, and often food-stressed when they arrive. This one was sitting on a telephone pole by the roadside, happily hunting for voles and allowing photographers a decent shot at some photos.