Why all conservationists should be vegetarian

It's a pretty safe bet that most of us care about the environment and want to protect wildlife. But if we're serious about being conservationists, I think it's time to have a good look at the food on our plates and ditch the steak. A true conservationist has to be vegetarian, I believe, and here's why.

Global meat production in 2012 – the most recent year for which definite figures are available – was 304.2 million tonnes; this was predicted to grow to 322.4 million tonnes in 2017. That equates to some 65 billion animals slaughtered every year. In the UK alone, over 2.5 million land animals are slaughtered daily. Moreover, meat consumption is expected to double in the next 40 years. It's having a huge effect on our planet, and it's only going to get worse.

Climate change is one of – if not the – biggest threats the environment is currently facing. Most of us would identify the world transport sector as the main culprit. We're all advised to leave the car at home wherever possible, as well as to make other small changes like turning the thermostat down by a couple of degrees.

But how many people consider giving up meat as a way to combat global warming? According to a recent report (Bailey et al 2014), the livestock sector is responsible for 14.5 per cent of production of greenhouse gases. This is more than the emissions produced from powering all the world's road vehicles, trains, ships and aeroplanes combined. The paper argues that the goal of keeping the global temperature rise below 2°C will be "off the table" unless there is a change in consumption patterns. 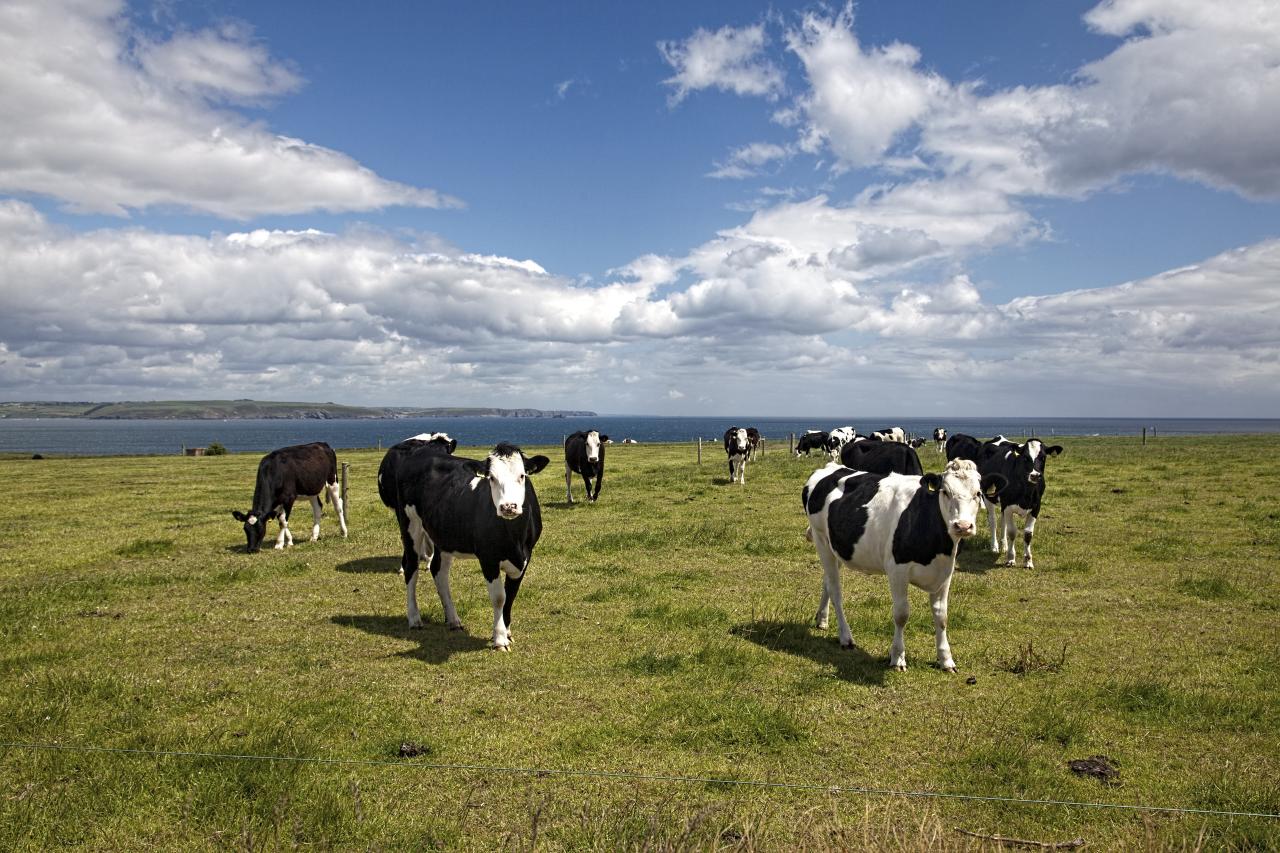 Cattle farming is an important source of income for many thousands of farmers and scenes like this are typical across Britain and the world – to the detriment of our planet's health (Christopher Michel).

The carbon footprint of a meat-eater is about double that of a vegetarian (Scarborough et al 2014). A vegan's carbon footprint is even smaller, about one-third that of a meat-eater. Cutting down on the amount of meat you eat will obviously help matters, but becoming vegetarian – or even going the whole hog, as it were, and becoming vegan – is even better. According to World Wildlife Fund researchers, global vegetarianism by 2050 would result in a 17 per cent reduction in the output of carbon dioxide, a 21 per cent fall in nitrous oxide and a 24 per cent reduction in methane – the three most potent greenhouse gasses.

Deforestation is another major driver of global warming, and one of the main causes of deforestation is livestock – particularly the production of feed and grazing for cattle. But it's not just about climate change. Huge swathes of habitat are being destroyed in order to produce more and more meat.

The Amazon is the most biodiverse area on the planet, with some 1,300 bird species, including many endemic and endangered species, being found there. This figure is dwarfed by the 40,000 plants and 100,000 invertebrates. But great areas of the Amazon are being lost to development, and the plants and animals that rely on it are being lost too. According to a 2009 UN Environmental Programme report, the Amazon region had lost 17 per cent of its forest, about 857,666 sq km, in the 50 years to 2005, leading to the extinction of 26 animal and plant species. If deforestation continues at its current rate in Brazil alone, at least 15 mammal, 30 bird and 10 amphibian species could die out locally by 2050. 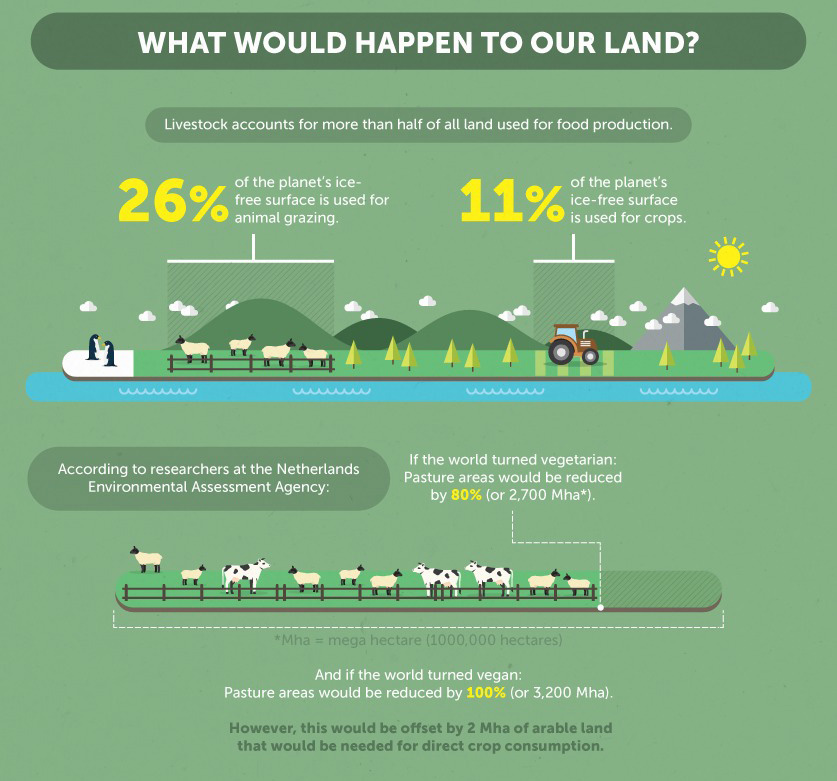 The number one culprit is livestock production, in the form of grazing for cattle or growing soy to make feed; this accounts for 80 per cent of deforestation. All this so that we can tuck into a hamburger (50 billion are eaten in the US alone every year). But if the world were to turn vegetarian, pasture areas would be reduced by 80 per cent, or 2,700 mega-hectares (Mha) – although this would be slightly offset by an extra 2 Mha needed for arable land required for direct crop consumption.

If Joni Mitchell were to write Big Yellow Taxi today, it wouldn't be a parking lot that replaced paradise; it would be endless fields of cud-chewing cows and soy plants. 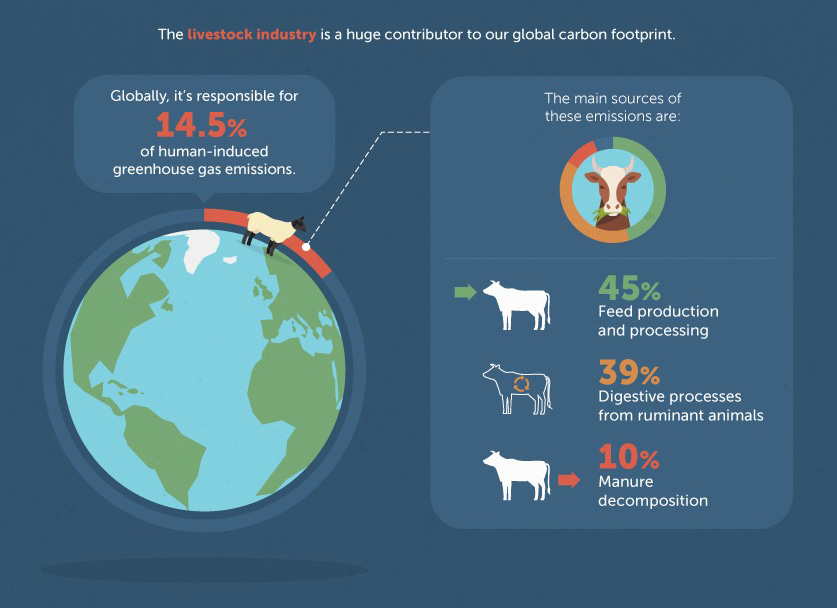 Water is a vital and limited resource. Some one billion people don't have sufficient access to clean water. Livestock production accounts for more than 8 per cent of the world's water use, and the projected increase in the consumption of animal products is only going to put further pressure on the planet's freshwater supply.

Global animal production requires about 2,422 cubic Gigametres (Gm3) of water per year. Again, cattle are the worst offenders, accounting for one-third of this total. This is because feed accounts for some 98 per cent of an animal's water footprint and beef cattle require the most feed.

But what does that mean for the food on your plate? It takes 112 L of water to produce 1 g of protein from beef; pulses, however, require just 19 L. Switching to a plant-based diet would clearly hugely reduce pressure on the world's water supply.

To put all those statistics into perspective, the UK alone uses 1.43 billion m3 of Brazilian water though imported soy. Yet 40 million Brazilian families don't have access to a reliable source of clean water.

Just reducing global meat consumption would make a huge difference to our environment. I've been vegetarian for 30 years and I applaud any attempts to cut down on the amount of meat people eat. There are lots of projects out there. Anyone on Twitter might have notice the #MeatFreeMondays hashtag, or #Veganuary which challenges people to go vegan for the whole of January. Then there's VB6, encouraging a vegan diet before 6 pm, or weekday vegetarianism, which simply means no meat Monday to Friday.

Of course, such initiatives may not appeal to all, and it's better for everyone contemplating such a major dietary change to do so in a way that works for them. But going meat free on a Monday isn't a huge commitment, and if everyone in the world did the same the amount of meat consumed would fall by a seventh in one easy move. But even better would be full-time vegetarianism or veganism. 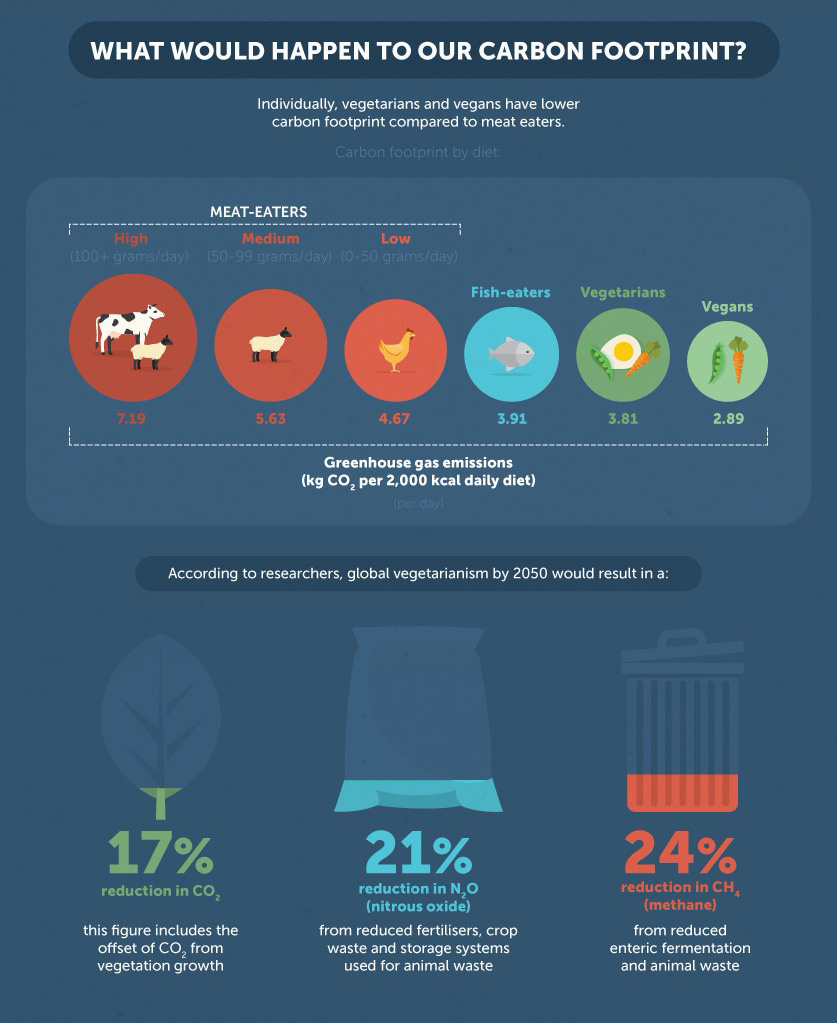