White Storks are addicted to junk food and make round trips of almost 60 miles to get their fix, according to new research from the University of East Anglia.

In folklore, storks would carry babies to parents around the world, but since the mid-1980s increasing numbers no longer migrate from Europe to Africa for the winter. Instead, many live in Spain and Portugal the whole year round, feeding on 'junk food' from landfill sites, which provide an abundant and reliable food supply. The species is among a growing number of migratory birds that have changed their behaviour due to human influences and global environmental change.

New research published at the weekend is the first to confirm that White Storks are now resident, nesting and living near landfill sites all year round. Researchers fear that the closure of landfills, as required by EU Landfill Directives, will have a dramatic impact on White Stork populations. 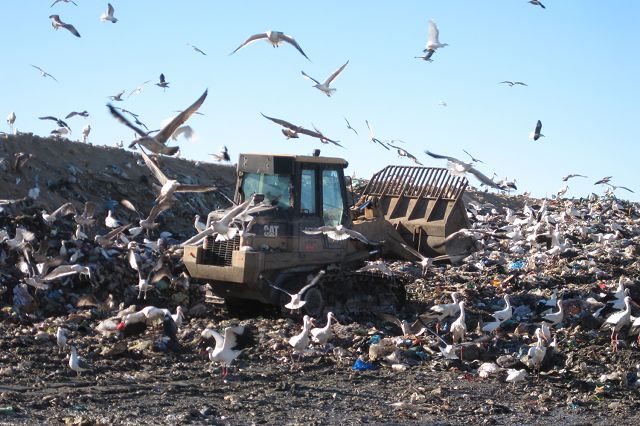 White Storks are now as much of a fixture as gulls on some Iberian landfill sites (Photo: Aldina Franco)

Lead researcher Dr Aldina Franco, from UEA's School of Environmental Sciences, said: "Portugal's stork population has grown tenfold over the last 20 years. The country is now home to around 14,000 wintering birds, and numbers continue to grow.

"These are exciting times to study animal migration. Several species, including White Stork — which used to be fully migratory in Europe — now have resident populations. We want to understand the causes and the mechanisms behind these changes in migratory behaviour.

"This study looked at the birds' reliance on landfill food. We found that the continuous availability of junk food from landfill has influenced nest use, daily travel distances and foraging ranges."

The research team tracked 48 birds using GPS tracking devices which transmit their positions five times a day. Each tracker also collected accelerometer information with detailed data about the birds' behaviour. The researchers are developing these trackers at UEA together with colleagues from the University of Lisbon and Porto and from the British Trust for Ornithology.

The data allowed the team to track the storks' movement between nesting and feeding areas, detect long- and short-distance flights, and study their behaviour to see whether they were standing and preening, foraging for food or tending their eggs.

"Storks now rely on landfill sites for food," said Dr Franco, "especially during the non-breeding season, when other food sources are more scarce. This has facilitated the establishment of resident populations. We found that the landfill sites enable year-round nest use, which is an entirely new behaviour that has developed very recently. This strategy enables the resident birds to select the best nest sites and to start breeding earlier. Having a nest close to a guaranteed food supply also means that the storks are less inclined to leave for the winter. They instead spend their non-breeding season defending their highly desirable nest locations.

"Under new EU Landfill Directives, rubbish dumps sites in Portugal are scheduled to be gradually replaced by new facilities where food waste is handled under cover. This will cause a problem for the storks, as they will have to find an alternative winter food supply. It may well impact on their distribution, breeding location, chick fledging success and migratory decisions."