Where do German Cuckoos go?

Germany's Birdlife partner Nature and Biodiversity Conservation Union (NABU) and its Bavarian partner Landesbund für Vogelschutz (LBV) have launched a new project to find out the migration strategies of Common Cuckoos from both Germany and Belarus, in a project that mirror's the BTO's Cuckoo Project. Already the project is revealing some interesting results and, as LBV conservation officer Andreas von Lindeiner explained, "Already at the beginning of the migration period, we have discovered how little we know."

The first Bavarian Cuckoo, fitted a few weeks ago with a mini satellite transmitter, has reached the Africa. Until now, it has remained a mystery as to exactly where the Cuckoos head to, or by which route, when they leave Germany. Already results that strongly mirror some of the British Cuckoos are being discovered — for example "Richard" has been tracked to eastern Libya, his route taking in Switzerland, then down through the boot of Italy across the Mediterranean. Of the thirteen tagged in Germany, two were still in Italy and four were in the Balkans. It will be interesting to see where he (and the others) end up spending the winter before their northbound journeys next spring.

As part of the same project, several Cuckoos were also tagged in Belarus; again, these are already giving interesting results. They appear to be heading for the same part of Africa but by different routes — including one that flew south via the Arabian Peninsula, Eritrea and Sudan before veering back westwards on reaching sub-Saharan Africa. Answering questions as to why some birds use different migration routes to others is the aim of projects such as this in the coming months. 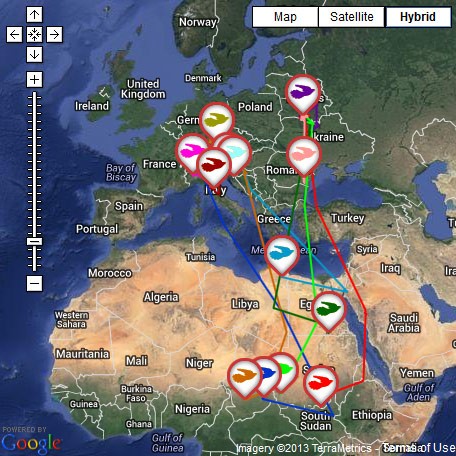 The positions of satellite-tagged Cuckoos from Germany and Belarus as of 25th July 2013 (Imagery: NABU/LBV).

You can log on to the LBV's Cuckoo Page ("Kuckuck, wo bist du?!") to track the German and Belarussian Cuckoos' progress by clicking here.