What do you call a group of Robins?

The BTO's recent reporting of unusual gatherings of Robins in gardens prompted the search for a collective noun for Britain's national bird. Of the 241 suggested nouns that were received by the BTO and Sunday Express, 'round' was the most popular, with 'breast' a close second.

The top ten suggestions received were:

Robins are generally highly territorial throughout the year and are often seen posturing to each other and even fighting to the death. However, severe winter weather pacifies their mood with individuals becoming much more congenial. 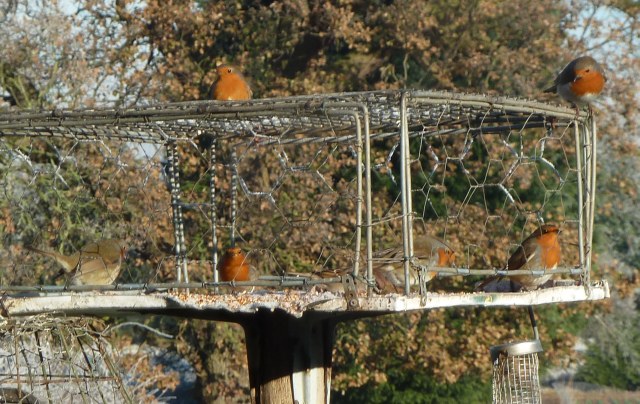 It was this photograph of six Robins using a bird table that prompted the media campaign through the Sunday Express to find a collective noun for this familiar bird (photo: Clwyd Roberts).

Behind this initiative is some quality "citizen science". Records collected by householders as part of the BTO's Garden BirdWatch show that following the winter's freezing conditions, when the average number of Robins in gardens soared, numbers have remained relatively high in gardens as the inclement weather persists.