Egypt is a country that continues to surprise. In the past couple of years alone, we've witnessed the discovery of African Mourning Dove at Abu Simbel — one of Egypt's southernmost outposts, just a boat journey across Lake Nasser from Sudan — breeding Saunders's Terns in the Red Sea (see here) and Chestnut-bellied Sandgrouse — a species thought long extinct in the country — rediscovered in the Nile Valley (discussed here). Add to this exciting vagrants such as African Openbill, Black Heron and Bruce's Green Pigeon in contemporary times, and it's easy to recognise the immense potential that this vastly underwatched country offers.

But last autumn's news that a breeding population of Yellow Bittern (Ixobrychus sinensis) had been discovered along Egypt's southern Red Sea coast was sensational, even by the country's own high standards. Egypt may be underwatched, but the coast south of Marsa Alam is relatively well covered by birders — in a landscape dominated by uninspiring desert, 'green' sites are few and far between, being restricted to a handful of hotel gardens, wadis and isolated patches of coastal mangroves along a coastline stretching for hundreds of kilometres as far south as Shalatein. Therefore, these 'birdy' sites are the subject of concentrated scrunity by birders seeking out the region's specialities, many of which are found in the pockets of mangroves dotted along the coast — the exact habitat in which the bitterns were discovered (Hering et al 2013).

The story began in late April 2012, when a team of German ornithologists studying the so-called 'Mangrove Reed Warbler' (A s avicenniae) trapped by chance two small herons, resembling Little Bitterns, in the mangroves at Wadi Lahami, a site well known and regularly visited by birders for its reliable Goliath Heron. The ornithologists were immediately struck by the birds' unusual coloration in comparison to Little Bittern and, after fully documenting them via photographs and measurements, soon realised they were Yellow Bitterns — a species that supposedly breeds no closer than southern Oman (c.2,000 kilometres away), with its primary range from the Indian Subcontinent eastwards. 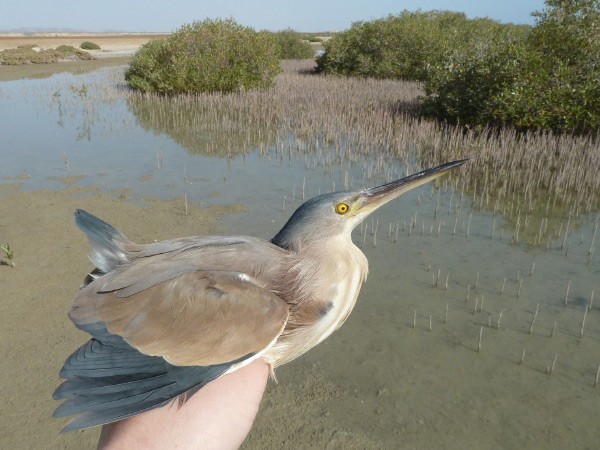 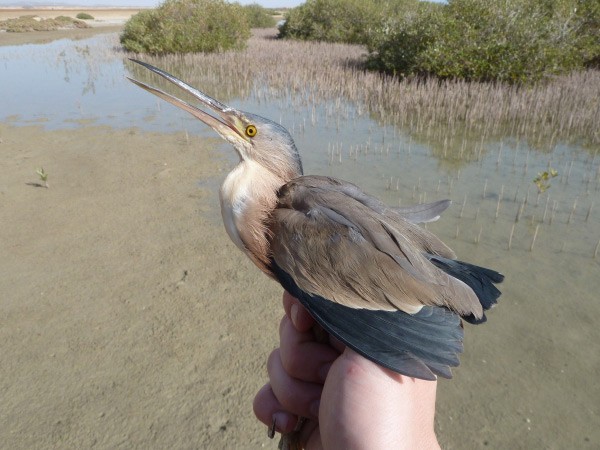 Over the next few days, the birds were also heard singing — both at night and during the day — and recordings were made. This turned out to be a regular phenomenon at Wadi Lahami, and playback during a netting session on 25th May resulted in the retrapping of one of the original birds, significantly now showing a clear brood patch. A few days later, an unringed male was caught, again showing a brood patch — clearly there were not just two birds present, and the suggestion that these were a little more than mere isolated vagrants was beginning to develop. Subsequent searching of the mangroves to the north and south of Wadi Lahami revealed singing Yellow Bitterns in no fewer than 12 places that spring! Evidence was now stacked strongly in favour of a significant population being present in the region, but we needed to prove breeding. Returning to Wadi Lahami in July 2013, we again trapped the two ringed birds caught the previous year and went on to find a total of three nests in the mangroves there, conclusively proving that the species is at least a breeding visitor (and presumably resident) in the region. 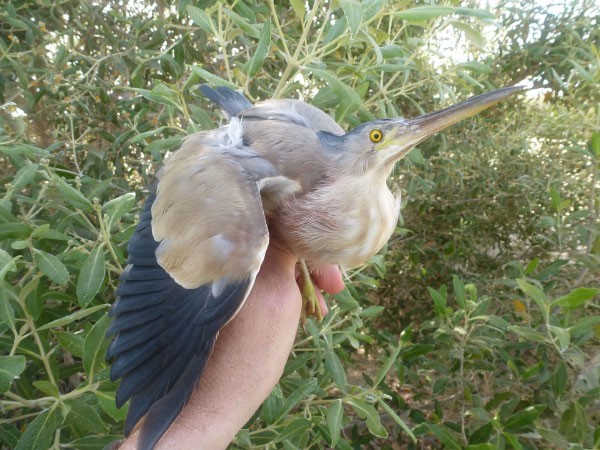 If a resident (and in some numbers), why has Yellow Bittern been overlooked in the region for so long? As explained in Hering et al. 2013, only twice did we have 'in the field' sightings of birds flying over the mangroves during several weeks of observation. It is this secretive lifestyle that seems one of the likely reasons for the species being overlooked for so long, despite regular visits from keen and active birdwatchers looking for other elusive mangrove specialities, such as Goliath Heron and African Collared Dove. Another possibility is that brief flight views have previously been passed off as migrant Little Bitterns — entirely understandable given that Yellow Bittern was, until these findings, entirely off the radar as a possibility.

Quite why an apparently healthy breeding population of Yellow Bittern thrives in Egypt's southern Red Sea region seems initially difficult to fathom. As previously mentioned, the species' primary range only begins some 3,000 km to the east in Pakistan. It appears not to be a recent colonist — the presence of birds at a dozen different sites supports this. It may well prove to be much more widespread than its current known range, with similar habitat to the south into Sudan, Djibouti, Eritrea and Somalia, as well as further north around the Sinai and on the opposite side of the Red Sea along the coasts of Saudi Arabia and Yemen. If it proves that Yellow Bittern is present in some — or even all — of these regions (as well as potentially even in the Nile Valley), it will suggest that southern Egypt's recently discovered population does not form an isolated outpost (as current knowledge suggests), but is in fact part of a widespread and consistent westward extension of its previously known range. Of course, this is all hypothetical and there is plenty of fieldwork to be done before this can be proved either way.

It is also conceivable that the song of Yellow Bittern could easily have been attributed to either an owl or amphibian species in the past. Anyone considering visiting the southern Red Sea region of Egypt should learn the species' vocalisations and be alert to them. Only then will we be able to understand the true extent of the range of what is, along with Brown Fish Owl in Turkey a few years ago, one of the most exciting discoveries within the Western Palearctic region in modern times.