On 25 May 2021, news broke out that a Eurasian Scops Owl was calling in an urban area in Delft, Zuid-Holland. Local residents first believed it was a car alarm that went off all night, but eventually they correctly identified the species themselves and then reported the bird. Apparently it had already been present since 18th – a convincing story, since the bird had been disturbing them in their sleep for nights on end!

While this was the around the 13th Scops Owl for The Netherlands, it was the first twitchable since 2010 and therefore attracted hundreds of birders to suburbia. With a little patience, perseverance and luck, it was not only heard but also regularly seen around dusk. On 27 May, it was caught in a light beam by a group of twitchers. A ring emerged on their photographs. The size and shape, as well as the little that was visible of the inscription proofed it was a scientific ring, rather than a ring from an escaped cage bird. The precise origin however remained unknown and it was therefore decided to trap the bird.

On 8 June, shortly after midnight, we managed to catch it in a mistnet on one of its usual flight routes, in the presence of the town's ecologist (Diny Tubbing) and three members of the local bird group Vogelwacht Delft (Gerard Dumaij, Kees Mostert and Hans Zweekhorst). 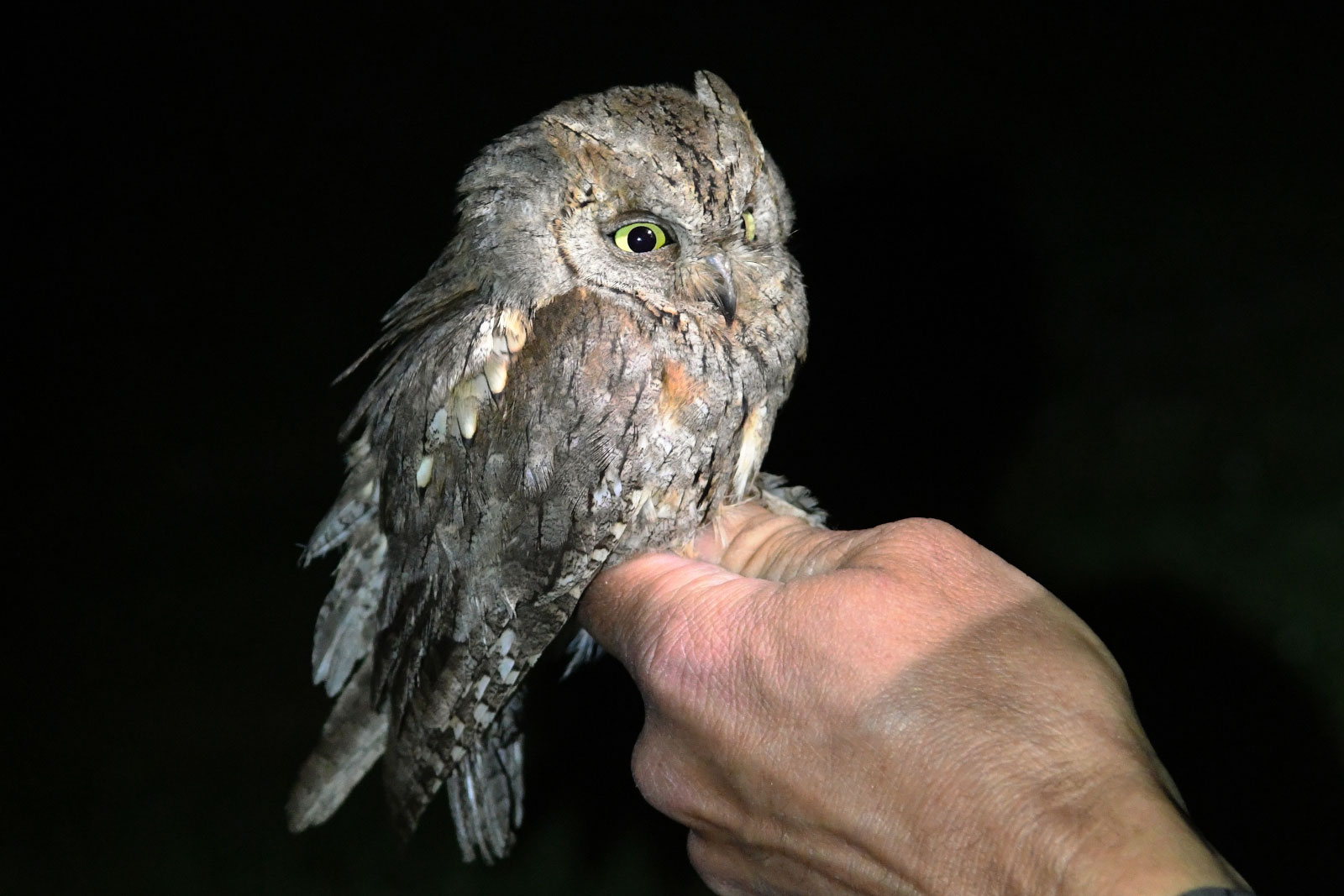 The recent Eurasian Scops Owl at Delft, The Netherlands, transpired to be wearing an Italian ring, which placed its origins in Trentino, north-east Italy (Vincent van der Spek).

We immediately checked the origin of its jewellery, which turned out to be an 'Ozzana' ring (Italy), as had already been suggested by some. Based on the shape of its primaries, and the markings on both its primaries and central tail feathers, the grey-morph owl was aged as a second calendar-year. Its behaviour and call type had already revealed it was a male. It was then measured (chord: 161 mm | tail: 70 mm | tarsus: 27.9 mm | head-bill: 46.5 mm), weighted (80.4 grams, suggesting it was in a good condition) and photographed. It was released within 15 minutes of being caught. Based on experience with a ringing programme for breeding owls of three species in the area, we were convinced trapping would not permanently disturb it (otherwise we would not have done it in the first place, of course), but what happened next baffled us. After release it flew straight back into its favoured tree ... and started calling again seconds later, as if nothing had happened! The bird remained in the area until the night of 12-13 June.

Due to the pro-active Erik Maassen (on behalf of the Dutch ringing scheme) and Pierfrancesco Micheloni (Italian scheme), the ringing data became quickly available. The scops owl was ringed as a first calendar-year in the province of Trentino, on the border with Lombardy, north-east Italy on 15 August 2020. To the best of our knowledge, this is the first time that the origin of a vagrant Eurasian Scops Owl north of its range has been determined. Based on the Spanish and Italian ringing atlases, foreign recoveries of this species are few and far between. Other birds turned up in Belgium and Germany (three) this spring, all not too far from the Dutch border. We now have a first clue of where the vagrants turning up in our region might originate from. 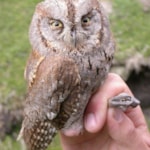