New research has revealed why murmurations of Starlings appear to shimmer dark and light when they manoeuvre in the air.

Why does it seem as if a dark band ripples through a flock of Starlings that are steering clear of a falcon or hawk? It all lies in the birds' ability to quickly and repeatedly dip to one side to avoid being attacked. For a split second, these 'zigs' change the view that observers on the ground have of the birds' wings, to cause a so-called 'agitation wave'. This evasive strategy is copied as quick as a flash from one neighbouring bird to the next.

The escape behaviour underlying this was discovered in a study led by Charlotte Hemelrijk of the Centre for Ecology and Evolutionary Studies in The Netherlands, and analysed through a series of video clips. The shimmering agitation waves form when individuals in a flock of birds, swarm of insects or school of fish quickly repeat the fear reaction or escape manoeuvre of a close neighbour. They can be seen as spirals, concentric rings or moving lines. In Giant Honey Bees, this happens when each insect lifts its abdomen, while in anchovies individuals temporarily move closer together or roll sideways.

In Starling flocks, a dark band moves continuously in a line from one end of a flock to the other, away from the predator, generally at a speed of 13.4 m per second, faster than the flock itself. What underlies the moving band was unknown, because the wave happens high above the ground and cannot be observed in detail. 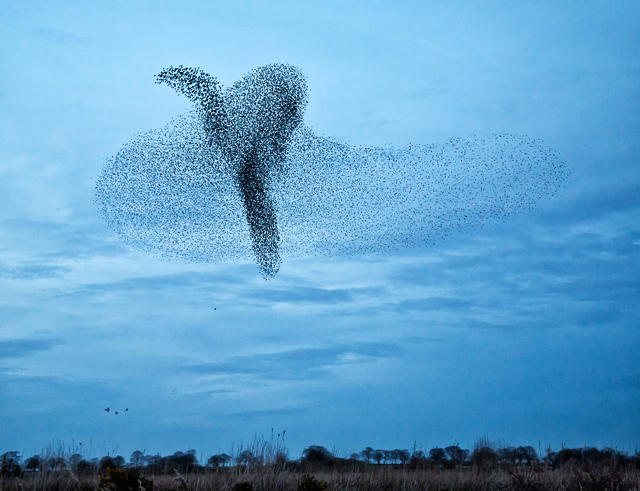 Starling murmurations are renowned for the exquisite beauty of the shapes they create (Photo: Antony Ward)

Therefore Hemelrijk's team turned to a computational model called StarDisplay. It models flocks that resemble groups of Starlings flying together. It showed that agitation waves among Starlings are caused by changes in the orientation of the birds and not due to variations in the density of the flock. The waves occur when individuals try to escape by moving sequentially closer together and further apart. A single band is obtained when the individual birds roll sideways and back again, thus performing half a zigzag, or 'zig'. When repeated by others further down the flock, this zig movement generates the single moving band, or agitation wave.

"On the ground, someone watching will for a split second see the largest wing area once a bird has rolled 90 degrees sideways," Hemelrijk explains. "This temporary increase of dark surface of the wing causes us to see a black band continuously moving away from the predator when the birds repeat each others' zig manoeuvre."

The researchers also found that repeating the escape behaviour from only two to seven neighbours close by is enough to generate an agitation wave. The wave speed increases along with the number of neighbours from whom the movement is mimicked and the distance between them. It also depends on the reaction time of individual birds.