Vancouver and the Rockies August 2007 Part 2

En route to Clearwater we passed Mount Robson National Park, where I had a stake-out for Calliope and Rufous Hummingbirds on the feeders by the café. Well, it just so happened that the old guy who used to put out the feeders had left, or died, or something similar; anyway the familiar theme was now developing: nobody to fill the feeders = no hummers. Wells Gray Provincial Park came highly recommended as a quiet alternative to the heavily visited National Parks in the Rockies, with good chances of Black Bear. Our arrival after a long drive revealed that the information centre staff, although very friendly and willing to supply lots of information, actually did not know of a good spot to see anything. A Common Nighthawk flying around the car park at 14:00 in bright sunshine and temperatures of 23°C seemed rather incongruous and turned out to be the only one I saw. An initial foray up the one road into the park did produce a Black Bear crossing the road, but from then on the 35-mile road revealed that you couldn't see the bears for the trees, as it were. Fortunately, and it is uncanny how often this sort of thing happens, we headed for a recommended restaurant on the lakeside and, as we had time to spare in the hot sun, a bit of boating seemed in order. A rowing boat was hired at the extortionate cost of $7 and the children had to row me round the lake. Having left the camera in the car for safety's sake it was rather galling when we managed to approach rather close to an adult Common Loon, which appeared to take no interest in us whatsoever. 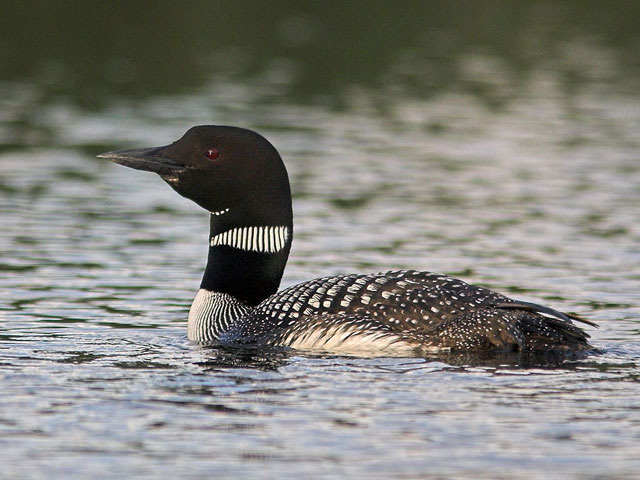 A quick reverse trip picked up the camera and although the sun had by then annoyingly passed behind a low cloud the shots, as they say, were in the bag and it even called when we were right alongside it in response to the appearance of a Bald Eagle. Next day Wells Gray at dawn produced another of those frustrating passage flocks of warblers, vireo, kinglets and empids while a water puddle in an upturned boat in the B&B garden produced rather less-than-elegant Evening Grosbeak and Western Tanagers. A long drive through the park was pretty bird- and bear-less but rich in feasting mosquitoes. A small party of Red-eyed Vireos enlivened the pre-breakfast stroll the following morning, and then a very long drive in often torrential rain took us in the direction of Pemberton, near Whistler, for another mosquito-rich stopover. The lake held Wood Ducks and Pied-billed Grebes and a mixed flock of American Robins and Swainson's Thrushes adorned some berry-bearing bushes briefly but, as with so many of the birds encountered, their appearance was brief. Next stop Vancouver Island and lots of birds to be had from the ferry crossing! We ticked North-western Crow in the harbour and added Glaucous-winged Gull, Pelagic and Brant's Cormorants to the trip list in hot sunny weather, at last, and were eventually on the ferry after missing the access road and doing a 6-mile detour. The ferry crossing was calm, sunny, with birds of interest nil, cetaceans of interest nil, anything of interest nil. 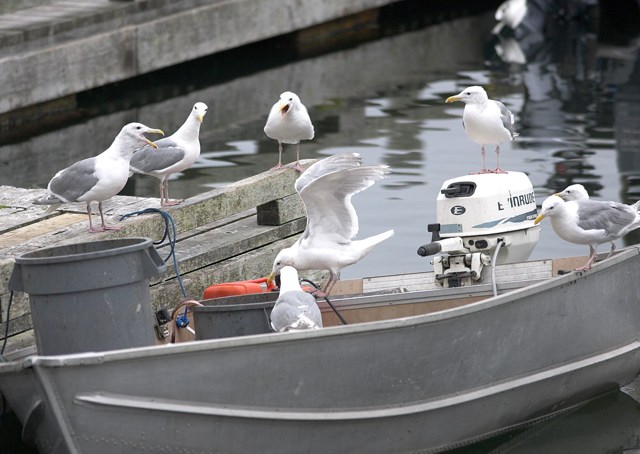 The long drive to Ucluluet on the west coast of the Pacific Rim was inevitably slow, punctuated by traffic lights, roadworks and an abysmal road, but soon we were into hordes of Glaucous-winged and California Gulls and the tidal inlet behind out B&B looked amazing for waders. It looked amazing, but in three days all I saw were two Spotted Sandpipers; where on earth were all the passage waders? The garden was better with Steller's Jays on the feeder but passerines were notably thin on the ground. The lighthouse at Ucluluet produced some Song Sparrows and Orange-crowned Warblers but even this migrant magnet seemed to be lacking in potential. The harbour held lots of nice gulls, Sea Otters and Sea Lions and a female Black Bear and two cubs roamed along the far bank, while Bald Eagles sat around like white-headed black statues. 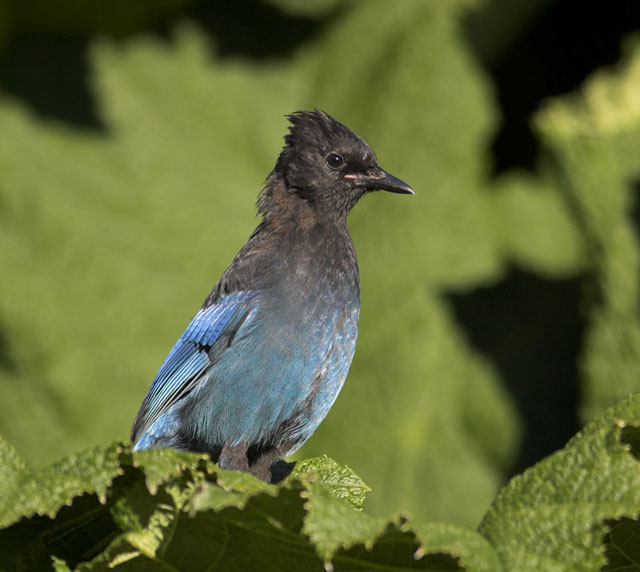 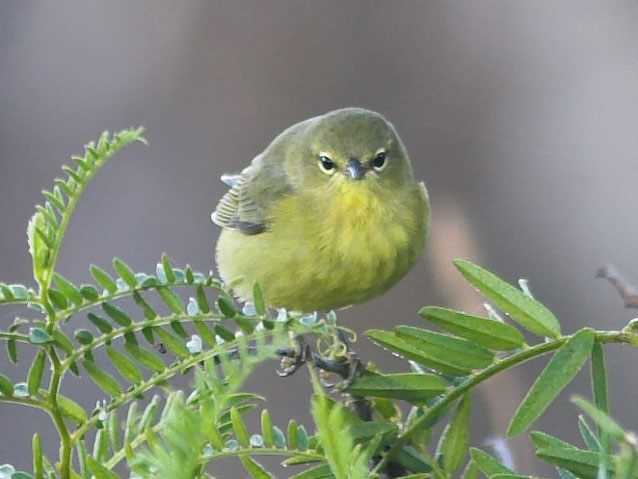 With the family in tow I had pre-booked two whale-watching trips out of Tofino and Sidney (near Victoria), the former for Gray Whale and the latter for Orcas. I had also figured that seabirds would be out there and I was sure to pick up some things of interest. I should really have read the title: "Whale watching trips" means that they look for whales and watch them and anything like a Tufted Puffin or some small auklets that you happen to be passing at 30mph in a wave-bumping boat is ignored and left rapidly at the rear of the boat. Using bins is almost impossible at speed and when they slow down for a whale there appear to be no birds! The Tofino trip was a bit bumpy and it rained and drizzled but we did see a Gray Whale and some close Pigeon Guillemots alongside the Sea Lions and a Sea Otter, while a few Rhinoceros Auklets had the good grace to try and fly alongside the boat enabling some decent views but poor photos in the grotty light. I had booked the southern trip out of Sidney as the Orcas are apparently often closer to there than Victoria so you save travelling time on the boat. Well, on our trip they were the other side of Victoria, so it took an hour to get there then we had to queue for pole position amongst all the other boats until we got amazing views. At one stage, the four whales moved alongside the coast and were apparently eating a family of River Otters. They were so close to the shore that a crowd had gathered on the headland to watch - now that would have been the place to be and would have saved £170! The return flight back on the boat, as we had used up all our time on the Orcas, passed a mass of seabirds, of which I managed to identify very few! I took a flying shot at a flock of waders that dropped on the water and amazingly could see on the image that they were in fact Red-necked Phalaropes; something I failed to note with the bins! The rest of our time on the west of the island showed that old-growth forests hold very few birds in August, but a long walk to a very nice beach did reveal a mass of birds in the bay offshore - now where did I leave my scope? Surf Scoters were abundant, with several loons and Red-necked and Horned Grebes, Hooded Mergansers and a single Harlequin, but there may have been other stuff out there. 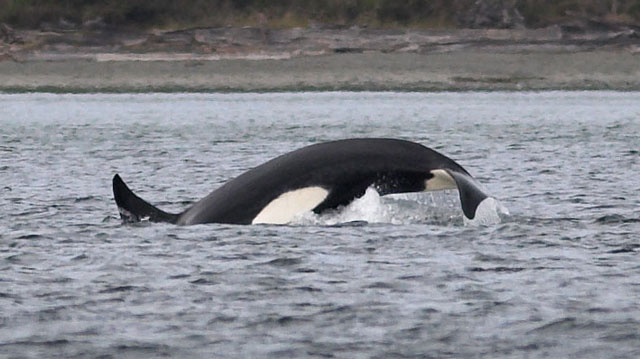 At the southern end of the island we stayed near Sidney and quickly discovered that here wealth equates to having a house for two people that could actually accommodate a small English village, owning at least one cabin cruiser and a berth at one of the 1000s of marinas which adorn the coast, and also staking a claim to your very own bit of the coastline. No public footpaths here, just an abundance of private signs, fences and the odd Doberman. Finding access to a beach or a bit of shoreline was almost impossible, and when you did the area which could be walked was usually about 30m long and covered by water at high tide! Once again I was being frustrated by the lack of waders; even in the areas where I did manage to find a bit of habitat there were just a few Black Oystercatcher and the odd Killdeer. A nice flock of juvenile Least Sandpipers did offer a photo opportunity but as I approached a Cooper's Hawk sent them heading south off the island. Belted Kingfishers were noisy and abundant in the tidal bays competing for feeding territories and I did manage a Rufous Hummer at the B&B plus a bullying Anna's Hummingbird, while Band-tailed Pigeons, Pileated Woodpeckers and Red-shafted Flickers were showy. Our last morning on the island was sunny and hot but more importantly I found a little bit of beach and some rocks where you could walk. While taking yet more shots of the car park-dwelling Glaucous-winged Gulls and associated hybrids, which must come in useful someday, a juvenile Western Sandpiper landed on the rocks. Luck at last and it proved to be typically approachable; memory card full as I stood up, a raptor jumped out of a nearby bush and flew back in again. A careful approach revealed a stunning juvenile Cooper's Hawk that seemed to be totally oblivious to my presence. Getting closer and closer, I managed to remove the 1.4 converter from the 300mm lens and then I had to turn the camera on its side as the bird was filling the frame. A timely reminder of how North American bird photographers get such stunning raptor shots while we struggle to get within 200m of a raptor in Britain. The return ferry trip was as eventful as the outgoing one. 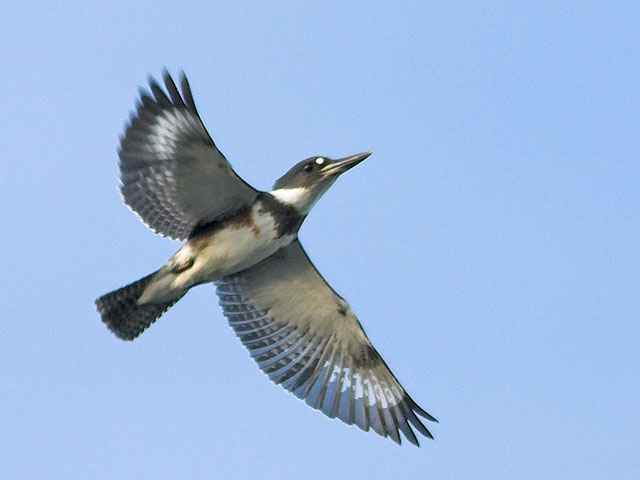 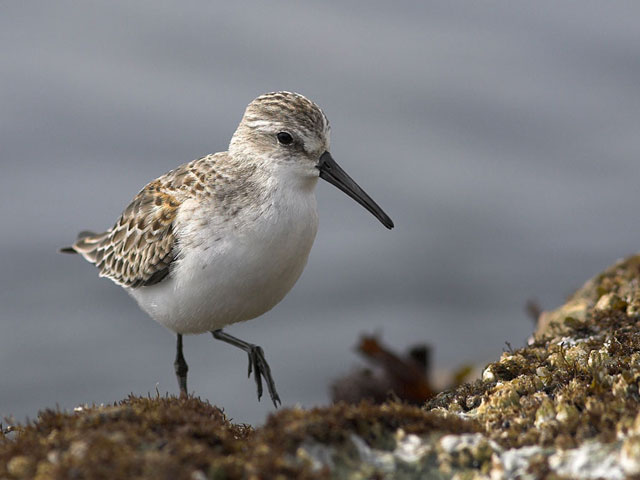 As we were flying back the following day, I had booked a B&B near Delta south of Vancouver. When we found it the choice was again frustrating, in that I didn't have a week here, and fortuitous. The B&B was a farm just on the edge of Boundary Bay, which to my regret I had not realised was one of the top wader spots in Canada! A Black Merlin in a telegraph post outside the farm was typically approachable and passed within 2m while attacking a passing Cooper's Hawk. An evening drive to the edge of the bay produced huge numbers of waterfowl, apparently mainly Pintail and Shoveler, and flocks of waders, waders and more waders - and where was my scope? Hundreds of Western and Least Sandpipers, Semipalmeted Plovers chewee-ing, Lesser and Greater Yellowlegs, an American Golden Plover and big flocks of Black-bellied Plovers (UK: Grey Plover), plus Long-billed and Short-billed Dowitchers, Blue-winged Teal, etc.: a wader watcher's dream, especially if you had a good scope! As we started back we found out that someone had locked the access gate behind us; never mind, an eight-mile detour and we found a gate open, just! The following morning I figured I could get a few wader shots first thing on the rising tide, but rising at dawn I found all the access gates locked and not only that, all of the approach roads, except one which was about 4 miles from the best wader spot, had no-parking signs enforced with tow-away-zone signs and the inevitable private signs. At this point I half-considered taking a series of photos of the various signs designed to prevent you seeing any birds in a brilliant area, but I lost interest. A drive in the dull and drizzly weather produced a Willet and several hundred Great Blue Herons, and finally one gate was opened at about 09:00 and a quick view of a few waders was possible before departure to the airport. By chance, I bumped into an ex-pat birding the area that morning and he told me where there was a Sharp-tailed Sandpiper, several Pectoral Sandpipers and two Ruff, but he said it's no good going unless you've got a scope; next time, I think I might take it! 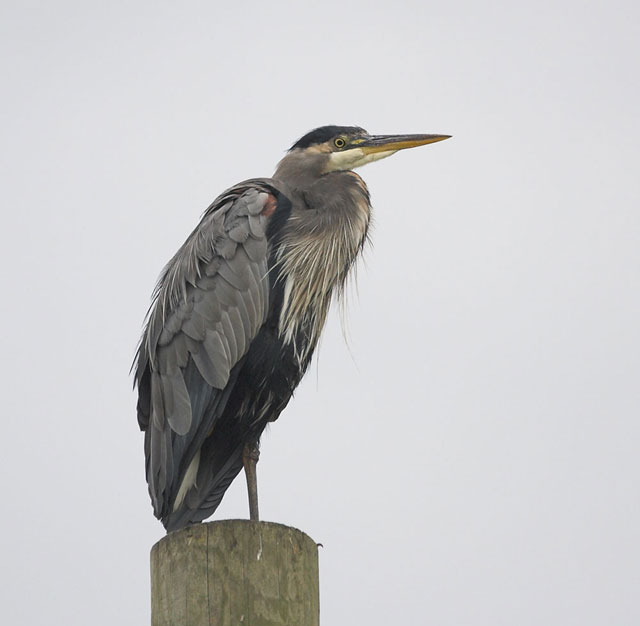 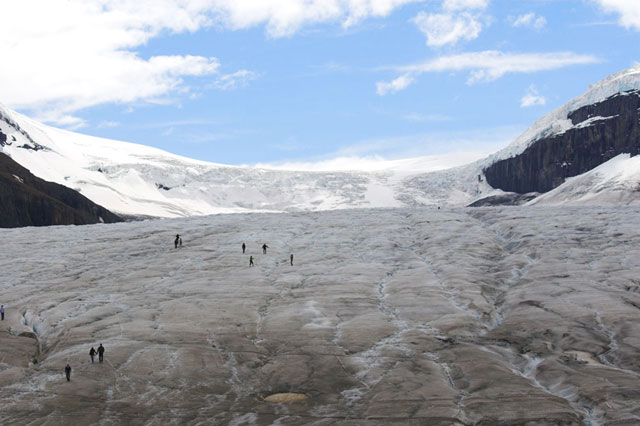