Our family holiday for 2007 was going to be a bit of a big spender: two weeks touring the Rockies and Vancouver Island in August, peak time for tourists and costs with unbroken sunshine and a few birds and mammals hopefully thrown in. Having decided on an itinerary taking in the usual hot spots of Banff and Jasper, Wells Gray Park then on to Vancouver Island for the Pacific Rim, we booked flights out from Manchester to Calgary and back from Vancouver, cutting out a lot of return driving. Accommodation was booked in advance at B&Bs, the cheaper option and in most cases excellent value, but this of course meant that there was no flexibility in the itinerary. To demonstrate my commitment to the family part of the trip, I had failed to do any research on birding spots or even what I was likely to encounter until the last couple of days before we left, when I found that apparently no-one goes birding on this route in late August! The only trip report I came across suggested that I was not likely to see many birds at all, as most of the summer visitors would have left the mountains and most sites people had visited produced very few birds. So what was the point in taking the scope and tripod - an unnecessary addition to the bulging luggage pile, and with all the camera gear to carry as well; plus it added to the family side of the commitment! Mistakes numbers one and two: do some research and don't leave the scope at home. 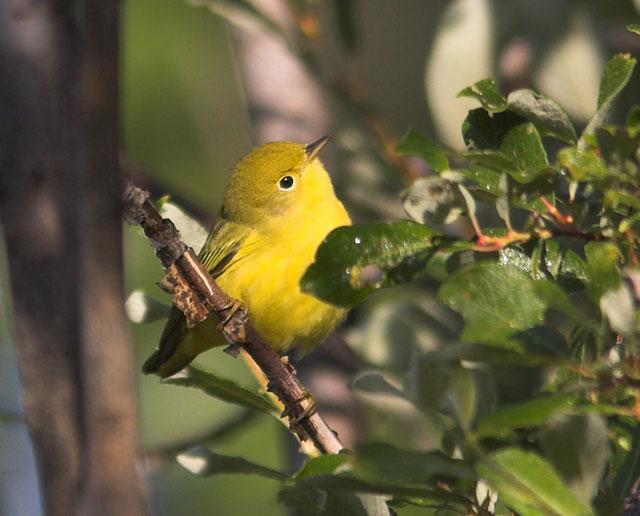 On arrival in Calgary it was not so hot or sunny, but dull and cloudy, and this was set for two or three days according to the sages - but a relatively short drive to Canmore and we were on the edge of the Rockies: impressive scenery and Ring-billed and California Gulls just outside the restaurant window amongst a gaggle of Brewer's Blackbirds. Maybe it was not quite so birdless after all. Having checked the sunrise and sunset times for Vancouver on the BBC website, I was up bright and early at 05:00 and wandering around on a nice boardwalk through a little marsh in Canmore in the dark for one and half hours; entertaining but not good birding. Of course, I had not taken into account that Vancouver was an hour different to the Rockies: mistake number three. As it eventually got light, birds started to call; then others called and sparrows called and warblers called and chipped and ticked and maybe I should have swotted up on my calls before leaving. But in spite of the noise the only visible birds were American Crows and Ravens. Then just before having to leave for breakfast birds became visible: American Robins and Audubon's Warblers, all seemingly dropping to bits in moult, Oregon Juncos and Lincoln's Sparrows also moulting and scruffy, and a Yellow Warbler perching nicely in front of the lower window of a house by the roadside. Maybe the residents of Canmore are used to opening their curtains and seeing a birder with a telephoto lens staring into their window or maybe not - quick exit needed. Day One we headed back to Calgary on the recommendation that a drive south to Head Smashed In Buffalo Jump was an essential visit. Only two hours south of Calgary - indeed, but I had forgotten in five years since my last trip to Canada just how many sets of traffic lights there are in every village! Three hours down the road through wide open prairies we were passing large shallow lakes, Prairie Potholes, covered in wildfowl and waders, but we were on a mission and I couldn't see a way to get off the highway anyway and we needed food from the café as well. Not all things go as planned though, as anyone who has been on birding trips with me will realise. Our arrival at the historic site just happened to coincide with a funeral of one of the key members of staff, so after our 4-hour drive the café was closed for the day; it was blowing a gale, red-hot and dusty. Birds: one Gray Catbird, seriously abraded to say the least, and a Say's Phoebe; all the Cliff Swallow nests were empty and vacated. 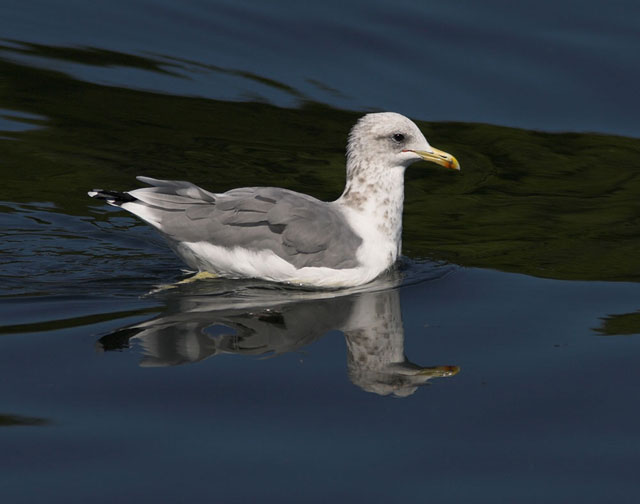 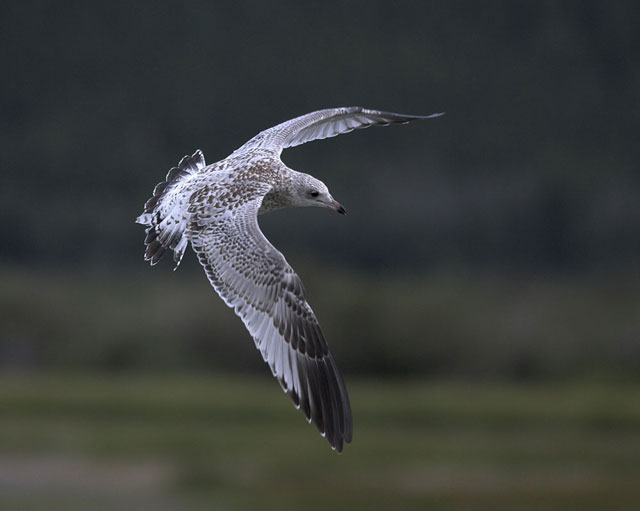 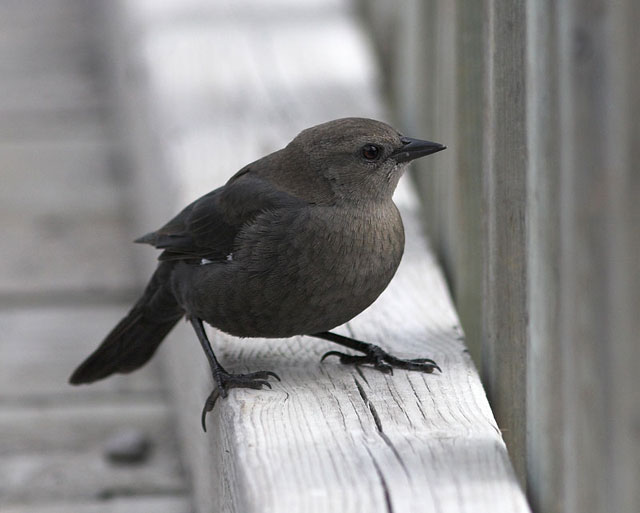 
Now I had to work out how to try and get into one of those potholes as the party were ravenous and there didn't appear to be any eateries within 100 miles! Passing numerous Swainson's and Red-tailed Hawks on the long drive back, we managed to get some dodgy fast (I mistyped this as "fats", which may seem appropriate) food at a small habitation called Nanton, and just across the road was a track which went apparently quite close to a rather nice-looking wetland. "Just an hour, folks". Access seemed easy but the high barbed-wire surrounding fences seemed to suggest that birders were not too welcome except in the corner near the slaughterhouse, where the fence had fallen down to allow people to walk in, obviously. It was windy and muddy, but what a place: in a scan of the nearby waders I managed to locate 8 Killdeer, 8 juvenile Baird's Sandpipers, 3 juvenile Least Sandpipers and 10+ Semipalmated Sandpipers, a Solitary Sandpiper, 2 juvenile Stilt Sandpipers, a Wilson's Snipe, Spotted Sandpiper, 30+ Lesser Yellowlegs and at least 40 Wilson's Phalaropes. This was not to mention the 30-odd Blue-winged Teal, a tern, probably a Forster's , that flew off before I had chance to have a good look, and the skulking sparrows, some of which were Savannah. In an hour I managed to photograph quite a few of these stunning juvenile waders before the crew needed to move on and it was back to Canmore via 700 sets of traffic lights in Calgary. 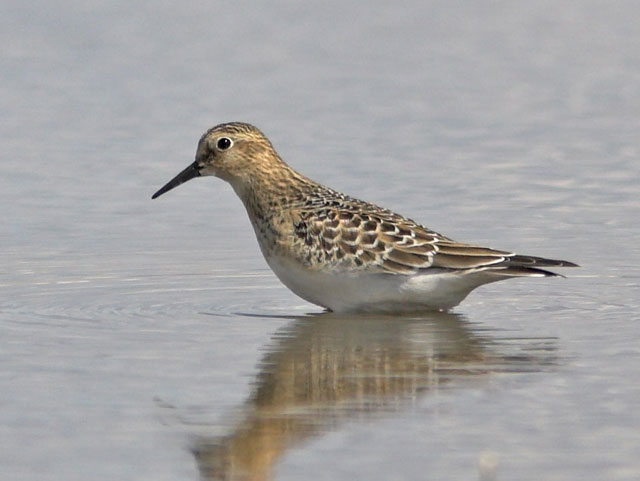 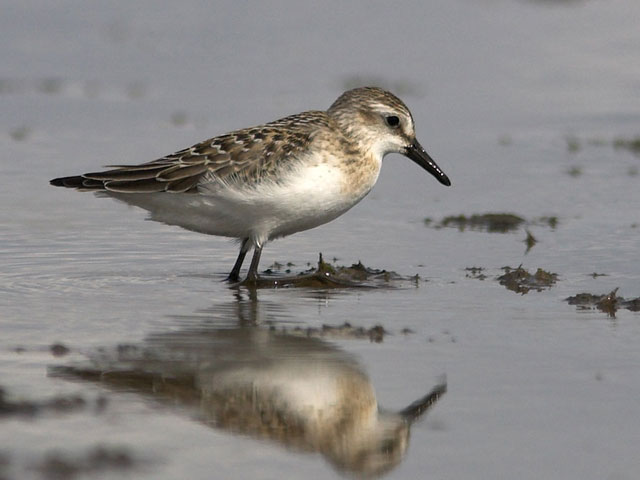 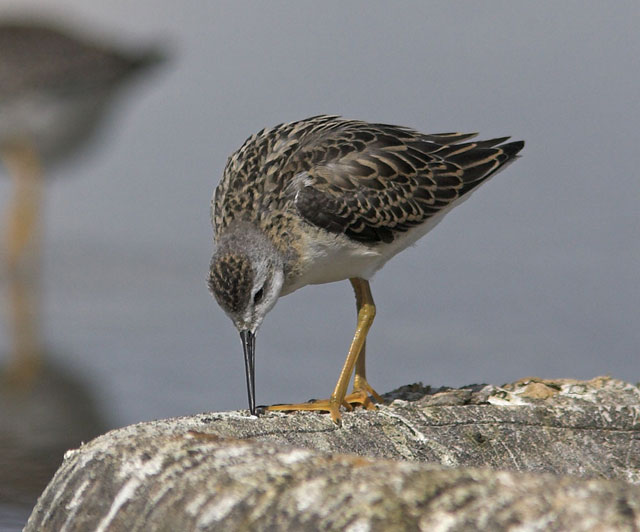 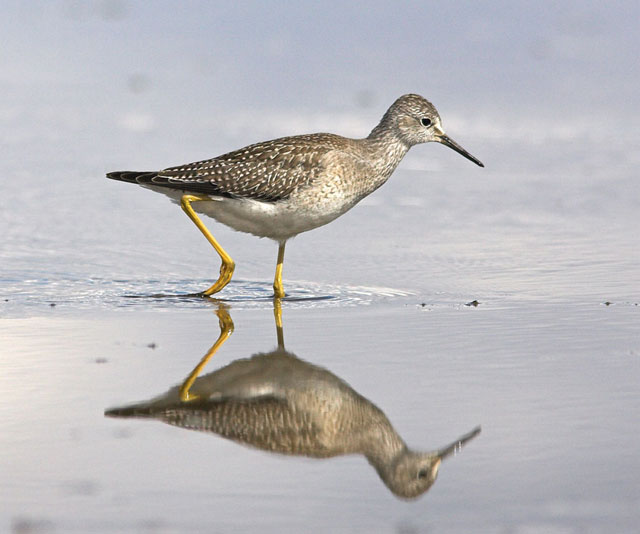 The following morning I headed into the edge of Banff National Park and stopped at a decent-looking picnic site. Quickly it became apparent that passerines were in flocks, mobile flocks, calling but seldom staying in one place for more than a few deci-seconds; not good for identification or photography but all you have to do is pish, a golden rule. Well, it did seem to have a few results first time around and then all the birds seemed to completely ignore my attempts. Audubon's and Wilson's Warblers were obvious and a fine Townsend's Warbler appeared and vanished amongst the juncos and Red-breasted Nuthatches, but a singing male White-winged Crossbill (UK: Two-barred) seemed to be a good find. Back on the tourist trail we visited Lake Louise - oh dear, another big mistake - then on to Moraine Lake, where the sunny summer weather meant a Force 5 wind off the glacier and adding all layers of clothing available. Although knee-deep in tourists, the trail up the lakeside did produce a stunning male Varied Thrush and an obliging party of Gray Jays with a Slate-coloured Fox Sparrow and Audubon's Warbler feeding young just out of the nest vying for attention with the Golden-mantled Ground Squirrels. The drive back though produced the big mammal: a huddle of vehicles on the roadside and a group of people squatting on a railway track revealed a grazing Grizzly Bear just 40m away, a photographic bonanza before the park ranger moved everyone on. Yogi would have been disappointed. 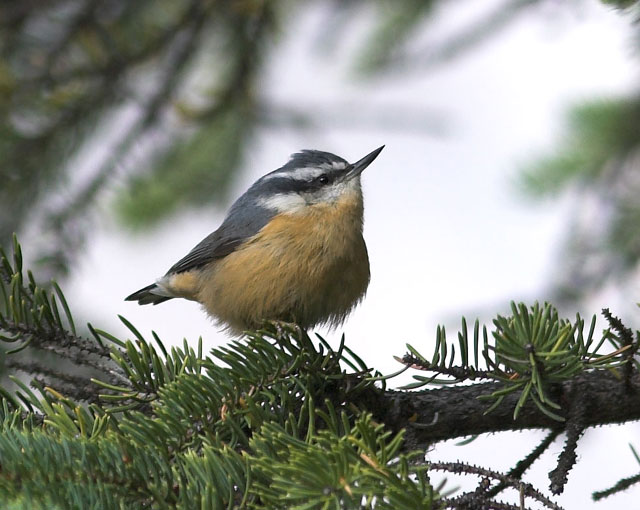 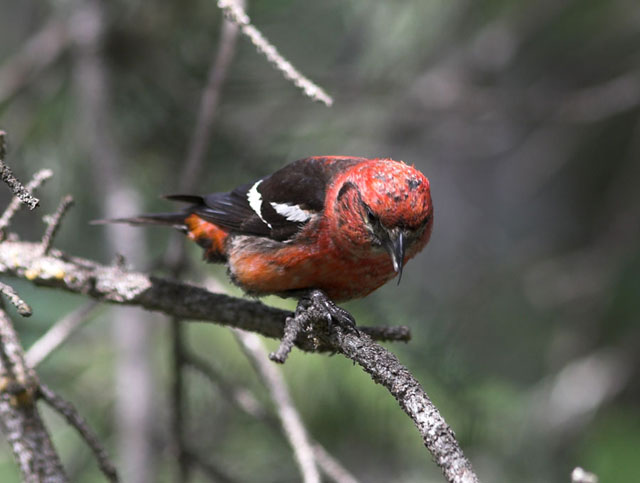 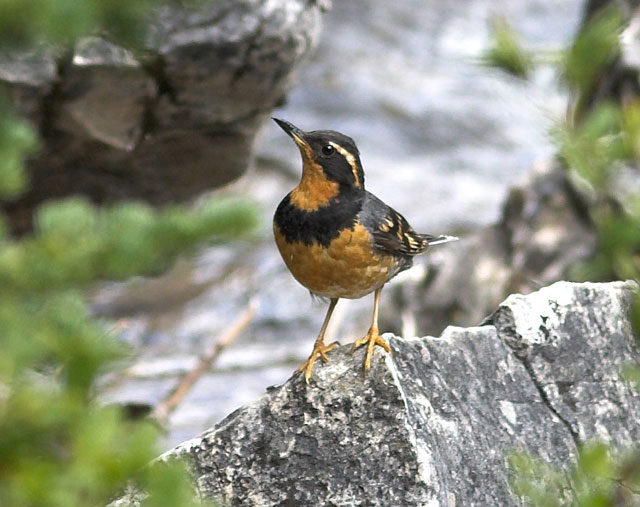 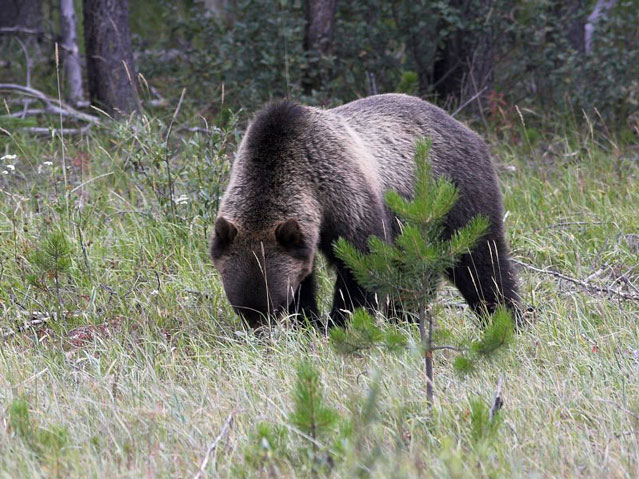 The following morning I managed to identify a passing Baird's Sandpiper on call and realised that all chickadees were scruffy, along with kinglets, while Northern Waterthrushes have a truly loud and distinctive call but fool you by calling from the top of 30-foot trees. I managed to flush a Sora, so now I can ID them in flight, and it was onto the Icefields Parkway. Nice scenery, too many people, lots of cloud, amazing numbers of White-winged Crossbills singing in all spruce woods, some moulting (becoming a dominant theme) grouse I couldn't ID, an unexpected encounter with a Prairie Falcon, a few Clark's Nutcracker and Gray Jays, and we were heading for our next overnight stop at Hinton, 50 miles east of Jasper. My early morning ventures at Hinton taught me another important fact: Nearctic birds are nothing like as easy in autumn as they are in spring; sparrows can be more than a bit tricky and are incredibly flighty and empids (Empidomax flycatchers - eds) just vanish without trace once you have had a brief glimpse of them in the open. I did manage to find Clay-coloured, Savannah and Chipping Sparrows and American Redstart, but I also found out that most of the migrants do two things in a morning: they appear out of their roost about an hour after first light and then they explode upwards calling and disappear. Frustration was high on the birding experience list. At Hinton there was a nice little marsh with a boardwalk that went right across to the beaver lodge and produced some nice birds, including another in-flight Sora (easy) plus some pished out and pished off Northern Waterthrushes - they see you and dive back into cover - and three Hooded Mergansers plus Beaver and Muskrat. 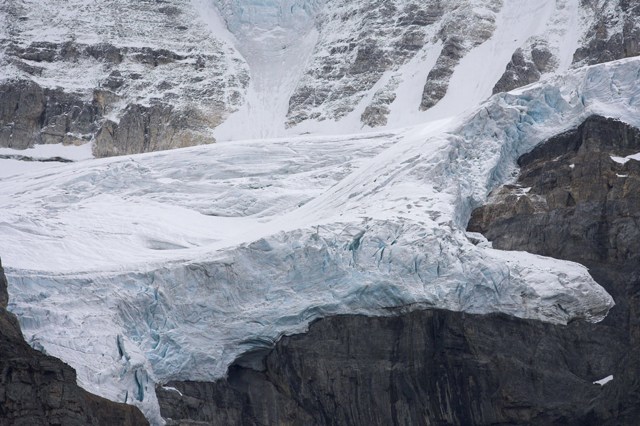 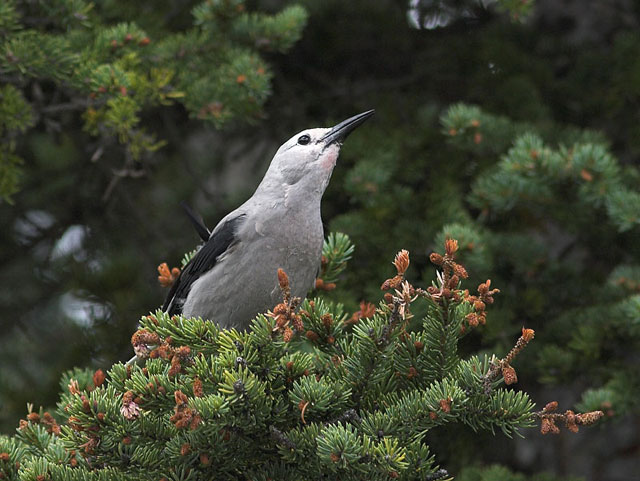 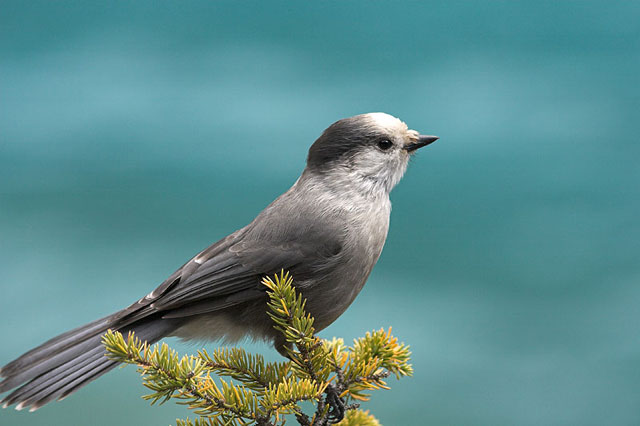 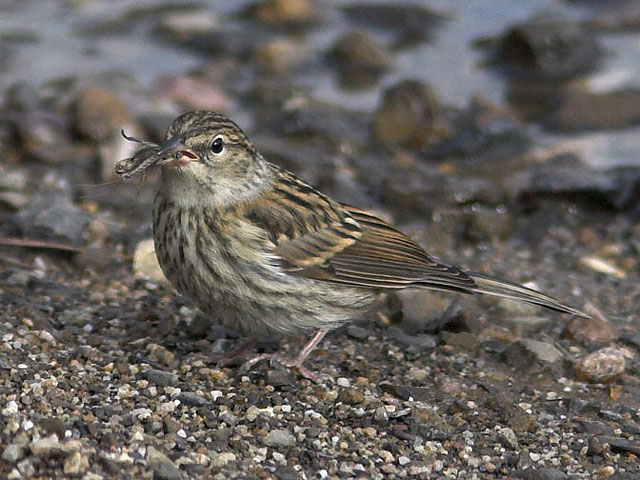 Convincing the family of the benefits of a gondola trip up the Whistler peaks, I managed to wander off long enough to add White-tailed Ptarmigan to my list and to photograph Columbian Ground Squirrel and Hoary Marmot, but a fly-by Buff-bellied Pipit disappeared without trace and I failed to find the hoped-for Gray-crowned Rosyfinches; at least the rain held off while we descended. A brief Black Bear up Maligne Lake road, some very accommodating White-winged Crossbills, a couple of Harlequins and a possible Pacific Slope Flycatcher rounded off our last day in the Rockies. 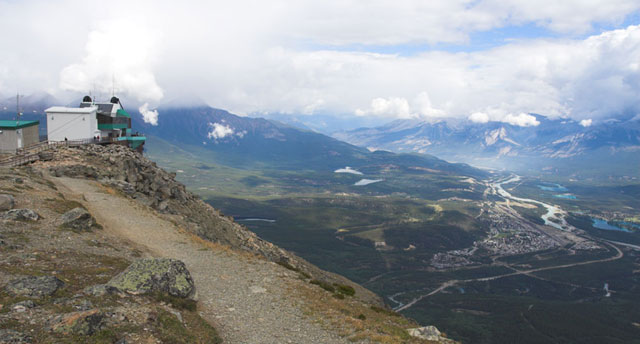 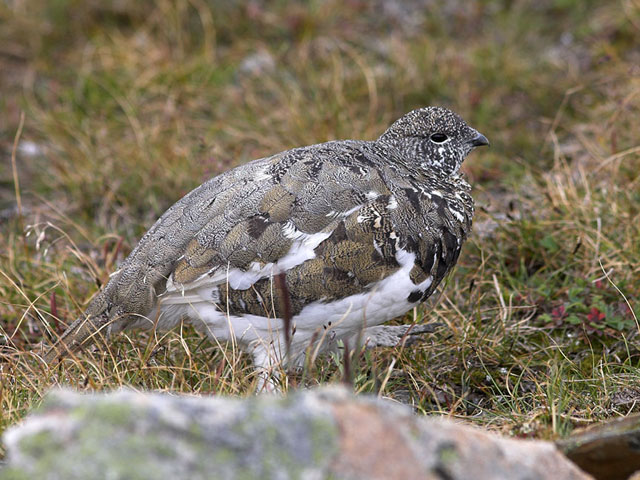