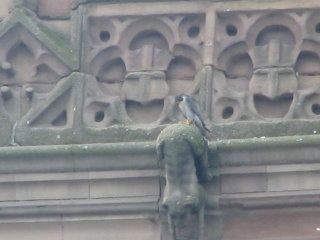 As elsewhere in lowland UK, Peregrine Falcons were pretty much absent from Derbyshire during the 1960s and 70s due to contamination with persistent pesticides. Their return to the Peak District occurred during the 1980s and 90s and there are now some 10-15 pairs present. In the 1990s a pair nested at a power station south of Derby until it was decommissioned and partially demolished in 2000.

Since autumn 2004, one or two Peregrines began using the splendid mediaeval tower at Derby cathedral for roosting and feeding on. With help from the cathedral vergers and staff at Derby Museum, staff at Derbyshire Wildlife Trust have collected prey remains from the base and top of the tower since March 2005 and so far, 28 species have been identified. 'Difficult' feathers and legs have been sent for identification to Ed Drewitt at Bristol Museum, a specialist on 'body part' ID! So far we have identified 28 prey species in Derby. These are: Teal, Gadwall, Mallard, Tufted Ducks and Ruddy Ducks, Golden Plover, Lapwing, Woodcock, Snipe, Jack Snipe, Dunlin, Redshank, Common Tern, Little Grebe, Water Rail, Quail, Moorhen, Jay, Redwing, Fieldfare, Blackbird, Song Thrush, Starling, Swift, Waxwing, Woodpigeon and, of course, Feral Pigeon. Just this week, we watched the male peregrine bring in a Pied Wagtail and stash it in a crevice on the tower. Nationally Ed's prey species list has over 90 species on it, including some very rare and unexpected ones such as Avocet, Black necked Grebe, Night Heron, Stone Curlew, Short-eared Owl and Ring-necked Parakeet! Clearly, urban Peregrines have catholic tastes (even those using a Church of England cathedral tower!)

The presence of night fliers like Woodcock, Jack Snipe, Quail and Water Rail strongly suggests these birds are hunting at night using the bright city floodlighting. Indeed, while I have seen the birds roosting after dark during the winter, motionless and facing into the stonework, I have also seen them alert, looking round and flying away from the tower well after dark, clearly in hunting mode.

Nick Dixon, the national expert on Peregrines nesting on artificial structures such as pylons, office blocks and churches, an invaluable source of advice and help throughout, tells me that the urban Peregrines in Warsaw regularly take Quail in the autumn. Ed reports Jack Snipe on their diet in Bristol and Bath and that Peregrines in Taiwan have now been filmed catching prey under floodlighting, hard proof of this presumably recently acquired new facet to their feeding repertoire.

In spring 2005, there were reports of display behaviour at the cathedral. However, around Easter that year, the birds departed, there being no suitable flat ledge on the tower on which they could nest. This winter we decided, somewhat belatedly, to seek the necessary permissions to attach a nest platform to the east side of the tower, a Grade One Listed Building. In early March, Nick Moyes of Derby Museum, an experienced climber and abseiler and his climbing friend, Nick Evans (who also happens to be a carpenter), abseiled down from the top to measure up the place we wanted to put a nest platform. Held up by weeks of poor, windy weather, the platform was only finally fixed in place on April 5th, much later than we had hoped. It took five hours and I must record my thanks to both Nicks and to three members of Derby Mountain Rescue who gave them support and hauled the heavy platform up to them. It was no easy task!

Within an hour of the work being completed, the peregrines were back on the tower. These particular birds do seem to be relatively unbothered by human presence, which is just as well since the public are allowed to go up the tower to see the splendid cityscape views on monthly 'tower open days' and the vergers also go up for regular flag-changing and maintenance purposes. In the weeks preceding this, the birds had been observed mating and flying to a tiny crevice on the tower where the female was making rather hopeless nest scraping movements. Within five days of the platform's placement, the male was seen to land on it, followed a few days later by the female. Ten days later, she must have begun egg-laying because, by about April 20th, she appeared to be incubating.

Despite awful weather, on May 28th, the male was seen to take food to the female on the tray, a sure sign that there were chicks (next year we hope to install a webcam!!). As soon as the birds had eggs, and taking advice from DEFRA, we roped off the east side of the tower top to prevent anyone peering over and looking down on the platform (including ourselves). Thus we have no idea how many eggs were laid or how many chicks we have.

During this half-term week, Derbyshire Wildlife Trust has operated a very successful Peregrine Watchpoint at the cathedral from a grass area on Full Street nearby, with visitors getting cracking views of these superb birds. The male has chased off a Common Buzzard, a Kestrel and even an intruding third Peregrine, as well as bringing food in for the female and the chicks.

There are many webcams across the world showing urban peregrine nests, mostly in the States. In the UK try a google search for 'peregrine webcams UK' to see chicks at other local nests, e.g. those on St. Michael's Church in Exeter (at http://www.eco-watch.com).

PS The Watchpoint programme runs 10am to 2pm on June 1st, 2nd and 4th and we may extend it when the chicks get big enough to be seen above the front of the platform. Keep an eye on BirdGuides news page for more information.

A useful site for identifying feathers can be found at: http://www.michelklemann.nl/verensite/start/index.html and the Derbyshire Wildlife Trust at http://www.derbyshirewildlifetrust.org.uk.