Urban parakeets could save species from extinction

Hispaniolan Parakeet, endemic to the Caribbean island of Hispaniola, is considered to be Vulnerable on the IUCN Red List. Like so many other members of the order Psittaciformes, its wild population has been shrinking in number and distribution due to habitat loss and especially capture for the illegal pet trade, even in protected areas.

To help defend the parakeet and Hispaniolan Amazon within their habitats, the Loro Parque Fundación is supporting a project in the Dominican Republic which covers the entire country. The on-site organisation is Grupo Jaragua, the BirdLife partner in the Dominican Republic, with the group's project manager, Andrea Thomen, as the principal scientist.

Hispaniolan Parakeet has been found in a wide variety of natural habitats, including forest from moist uplands to arid lowlands (3,000 m to almost sea level), open woodland and palm savannah. It also occurs in secondary growth from previously cleared habitat, parks and similar green spaces, and agricultural land where it risks persecution as a crop pest. Thus, the project has many sites to visit, and the compilation of information, which will form the foundation of a strengthened recovery strategy for both psittacine species, is ongoing.

At the same time that the parakeets are struggling in rural areas, in recent years more are being recorded in urban settings. The project team has also been investigating the extent of this phenomenon, especially in what could be called the largest urban refuge, Santo Domingo, the capital city of the Dominican Republic. 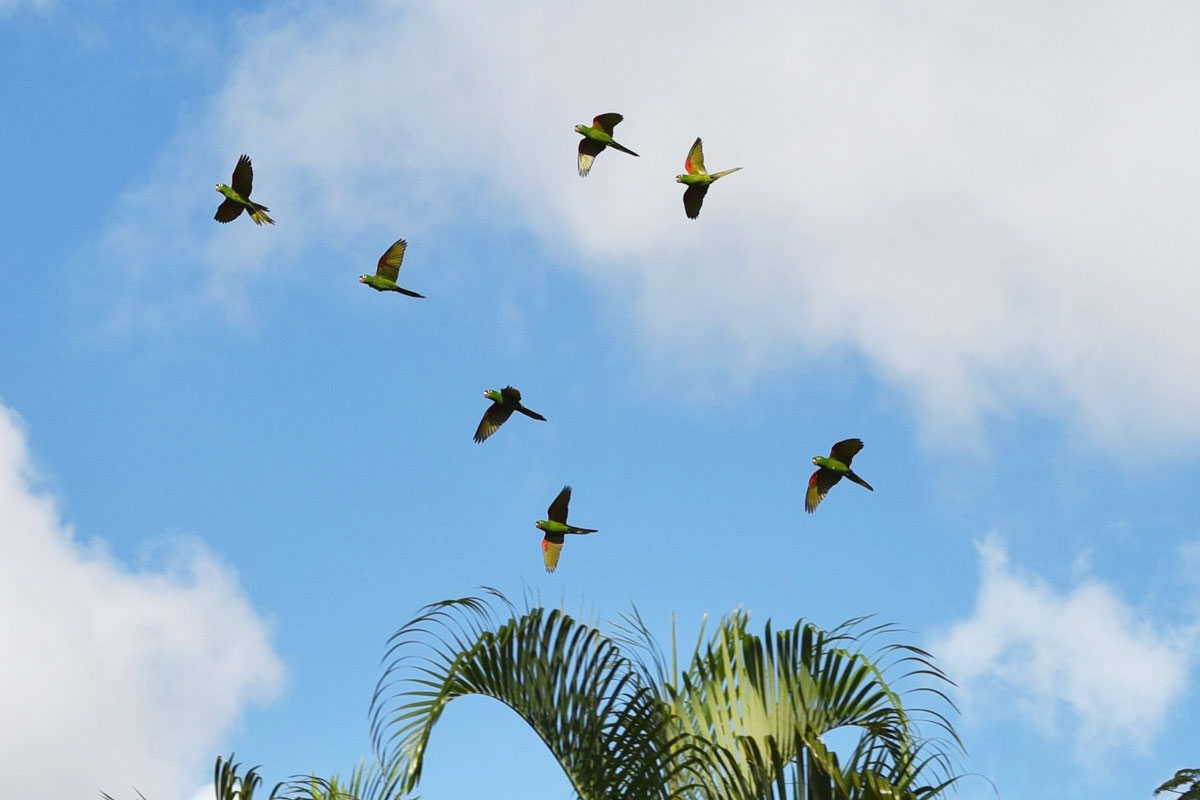 Flocks of Hispaniolan Parakeet are readily found in Santo Domingo, with the capital of the Dominican Republic now known to be an important locality for the Vulnerable species (Martingloor / CC BY-SA 4.0).

To investigate the distribution of parakeets in the city, researchers undertook transects and point-counts across 60 x 1 km2 squares of Santo Domingo to unearth the reasons for parakeet presence, variability in numbers and breeding at certain sites. This was fieldwork with a difference. Founded by the Spanish in 1498, the city of Santo Domingo now spreads over an area of 104 km2, within which live almost 1 million people.

What the project team found is quite remarkable. It turns out that Santo Domingo, a massive urban area, harbours the densest remaining parakeet population in the whole of Hispaniola. They found that parakeets were more likely to be present where tree diversity was higher, and that more frequent encounters with parakeets occurred in places not only with more tree species, but also with more stand-alone green spaces bigger than 100 m2. Hispaniolan Parakeets were found breeding in the city, although curiously not in tree cavities in the green spaces, except for a single nest in a mature palm tree at the National Botanical Garden. 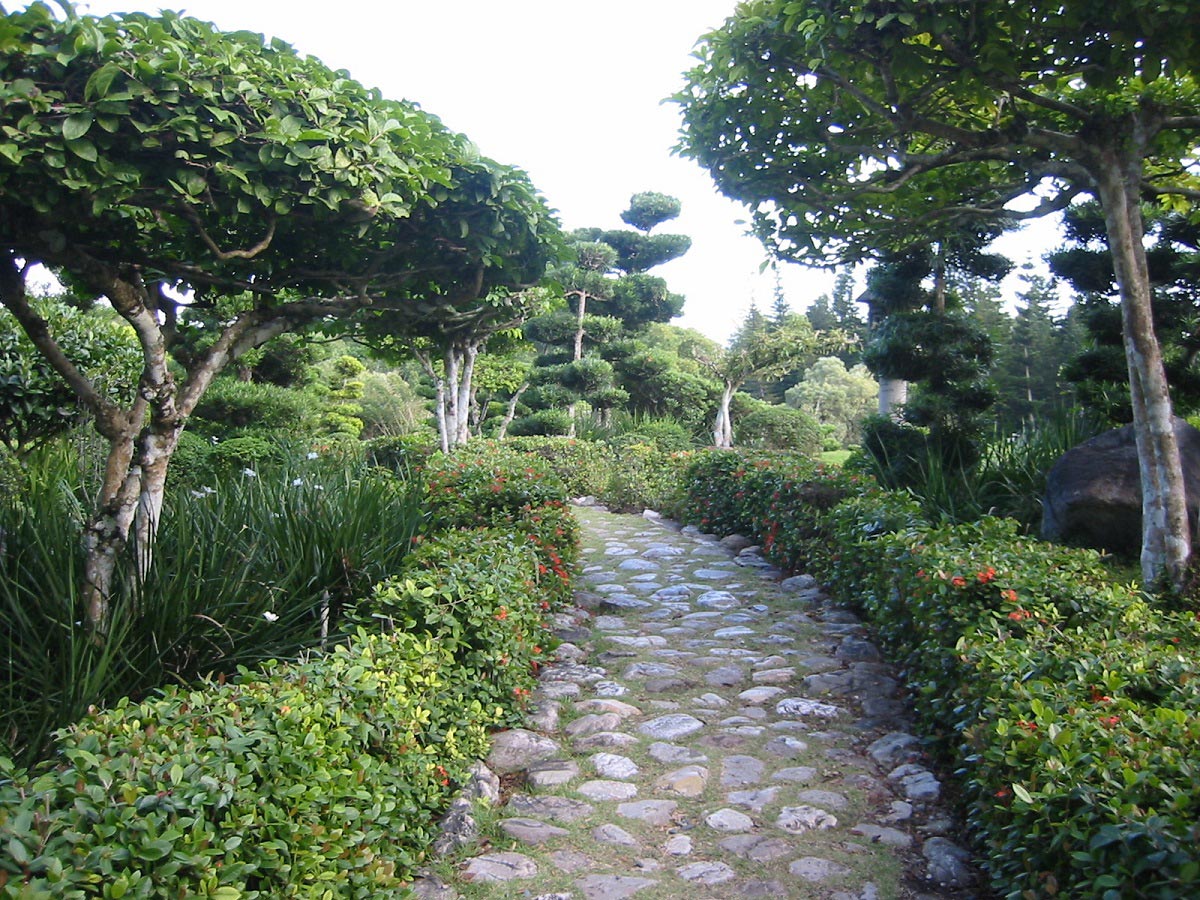 The study showed that green spaces in Santo Domingo, such as the National Botanical Garden, are now crucially important to the parakeets (AFI / CC BY-SA 3.0).

The two key breeding colonies (perhaps 50-100 pairs between them) were in old buildings, the library of the Autonomous University of Santo Domingo (UASD) and the ruins of the San Nicolás de Bari Hospital. Only two additional nests were located in buildings. The nesting situation appears to be a departure from what is considered to be typical in natural habitat, where the main excavator of tree-cavities is Hispaniolan Woodpecker, and the Hispaniolan Parakeet is a secondary user of those cavities. Hispaniolan Woodpeckers are widespread throughout Santo Domingo, but the parakeets do not use their cavities.

The project team also found only a single roost site in regular use in Santo Domingo, in trees at the entrance to the five-star El Embajador Hotel. Successive counts leds the project team to estimate that more than 1,500 individuals regularly use this site, together with very small numbers of Hispaniolan Parrots. Given that parakeets were observed at the two known breeding colonies at the same times as the roost was occupied, the total urban population is probably even larger. For context, BirdLife International estimates the total island-wide population of Hispaniolan Parakeet to be between 1,500 and 7,000 mature individuals.

The same roost consisted of just 118 birds in 1998, and the project team consider that the city has been colonised relatively recently by the parakeet, presumably from individuals which escaped or were released deliberately. Now Santo Domingo may well be a stronghold for Hispaniolan Parakeet, and perhaps a source for individuals to recolonise formerly occupied localities of the island.