Ups and downs for endemic parrots and coffee in Ethiopia

It seems that the world is becoming more fractious, with people taking to the streets in protest at perceived injustices. Ethiopia has been no exception, which has in turn had an impact on the conservation of the endemic Yellow-fronted Parrot, which is being led by the Loro Parque Fundación and NABU (Nature and Biodiversity Conservation Union, the BirdLife International partner of Germany).

Previously unaffected by nationwide political protests, unrest finally arrived at the Kafa Biosphere Reserve in 2019. Demonstrations were largely peaceful but local youth groups, expressing their dissatisfaction with the lack of land and employment opportunities, misplaced their frustration on two project nurseries. The vandalism destroyed planting beds and shade roofs, as well as about 31,200 seedlings, these forming part of the 173-hectare reforestation effort to expand breeding and feeding areas for the local Yellow-fronted Parrots. Efforts are under way to secure funding to ensure the replacement of the destroyed seedlings. 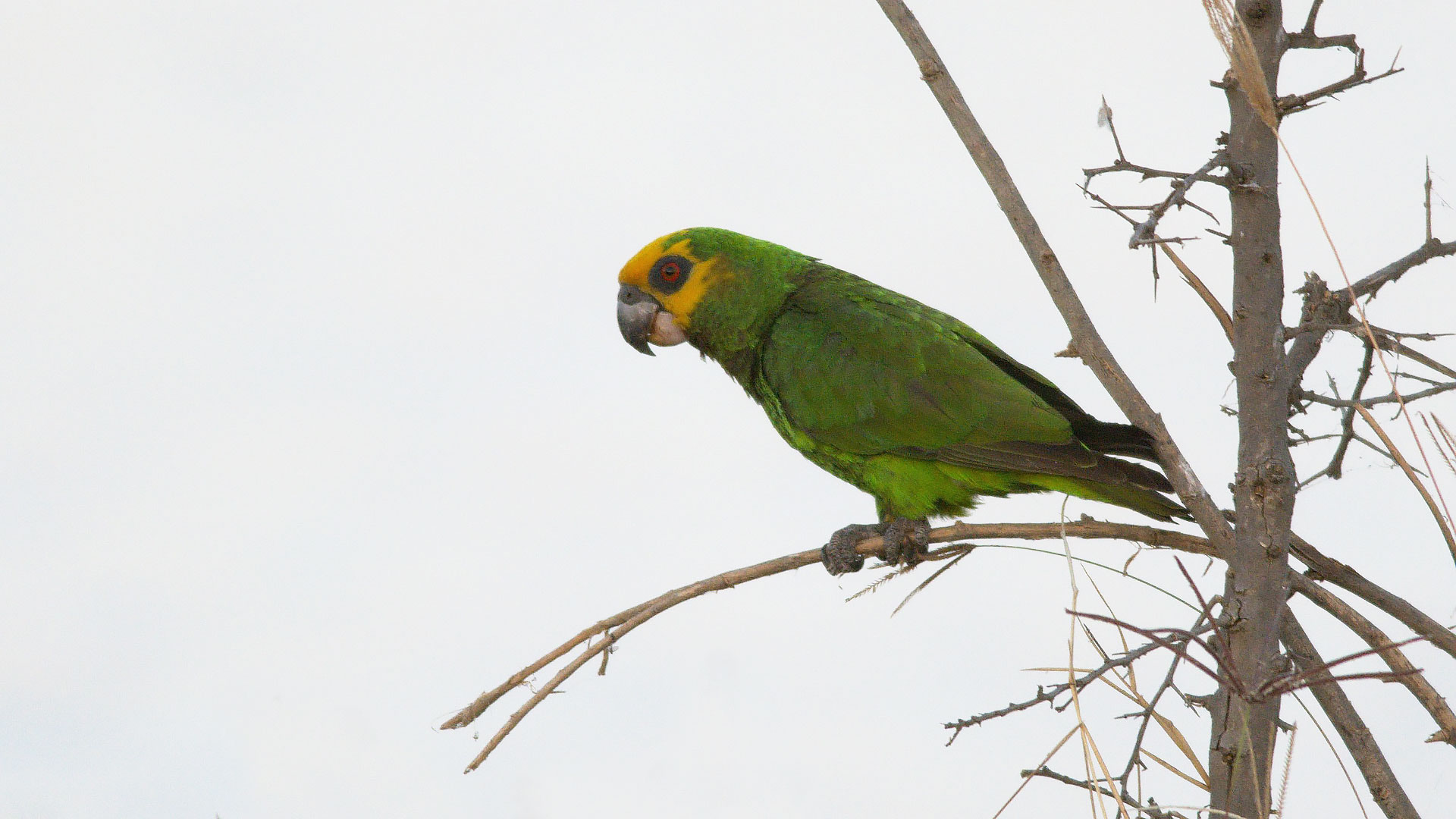 Within the same time period, scientists published the first full assessment of risks to the world's coffee plants, including the two species used for the coffee we drink, which shows that 60% of 124 known species are on the edge of extinction. That figure gives cause for concern, as wild coffee is critical for sustaining the global coffee crop. Ethiopia is the home of Arabica coffee, where it grows naturally in the upland rainforests in which Yellow-fronted Parrots are also found. Wild Arabica is used to supply seeds for coffee farming and is also harvested directly. A second study projects that climate change is likely to cause the natural population of wild Arabica coffee to shrink by up to 50% or more by 2088. This is why the project links the parrot with the coffee, for example by reforesting areas with a mix of tree species to withstand the projected changes.

These recent events could be viewed as one step backward, but the good news is that other activities over the same period resulted in two steps forward for the project. In close consultation with the local communities, the project team identified nine different tree species for reforestation (seven native and two naturalised species) based on previous reforestation experience and their function as feeding, roosting and gathering places for Yellow-fronted Parrots. The two naturalised species are used for external boundary demarcation of the reforestation site. Germination of the seeds was undertaken at the three nursery sites and 77,523 tree seedlings (51,823 native and 25,700 naturalised) were produced. The daily operation and maintenance of the nursery sites are performed by about 85 previously unemployed community members, who are employed by the project as nursery foremen, guards and labourers.

Nursery labourers transplanted almost 23,600 seedlings of native trees to the reforestation site, where additional labourers were employed in the previously tested reforestation process that avoids the clearing of the entire area, but instead only clears planting sites every 5 metres. The intervening undergrowth and shrubs are left untouched and thereby provide natural protection to the newly planted seedlings. 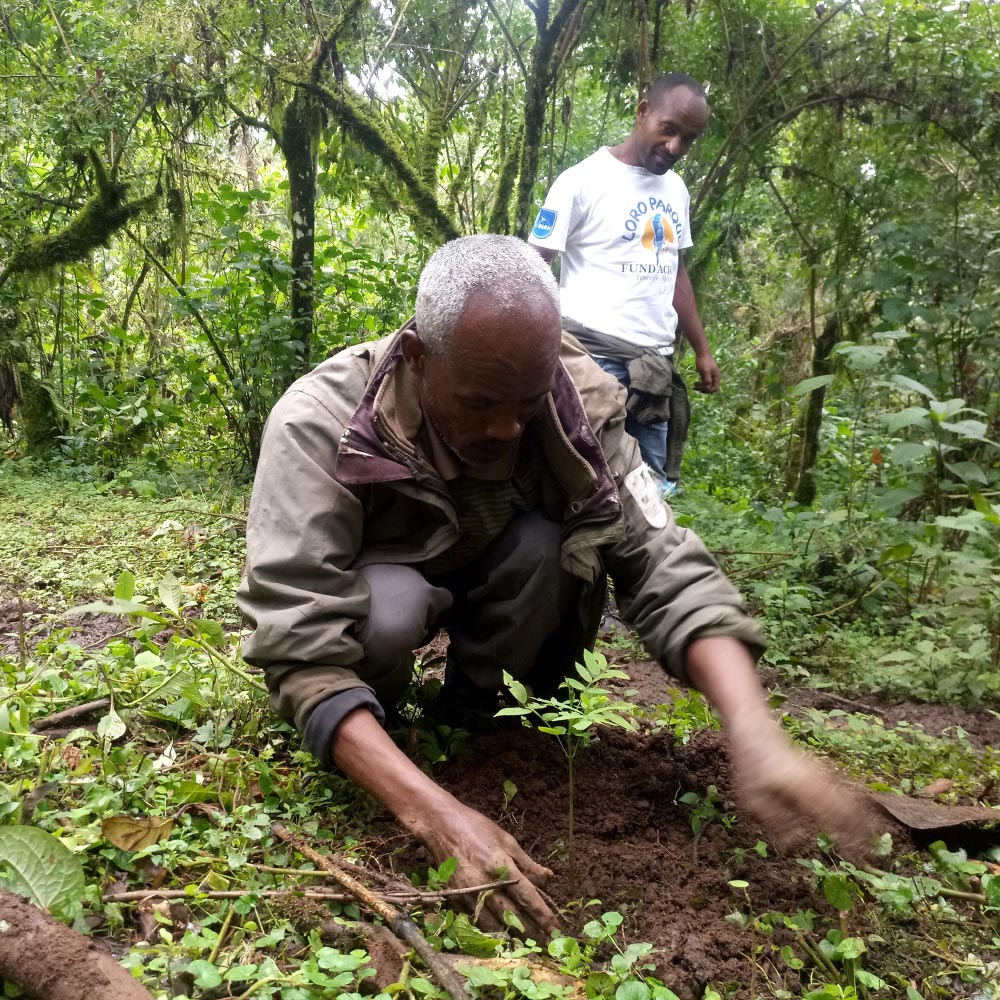 Volunteers help out with the reforestation process in Ethiopia (NABU).

The project rangers and the Natural Resource Management Officer took part in 'Community Biodiversity Monitoring Training', conducted by international experts of the Akvo Foundation and aimed at developing a new smartphone-based biodiversity and forest monitoring application (called Akvo Flow). The new app allows data to be transferred to a cloud as soon as the rangers' smartphone is connected to a stable internet connection, and improves on the existing data gathering and data analysis. Using this improved system, the project rangers have continuously conducted biodiversity monitoring and recording in the project region.  Local community members reported new feeding and breeding sites of Yellow-fronted Parrot in two new areas, and follow-up visits by project rangers confirmed presence of the species at one of these.

The project rangers have also continued their activities of awareness-raising in all five districts where the project is active, reaching a total number of more than 1,650 community members. They communicate about the socio-economic benefits from biodiversity and forest conservation activities in the Kafa Biosphere Reserve, not only the importance of ancestral coffee, but also about species preservation, including Yellow-fronted Parrot, and implications of the biosphere reserve status and climate change. The project team is engaged in a close exchange with the local communities, in particular the local teachers and students who can function as multipliers in the awareness process. In return, the team benefits greatly from observations reported by community members, especially about new breeding and feeding places of the Yellow-fronted Parrot, a jaunty bird that all seem to like. 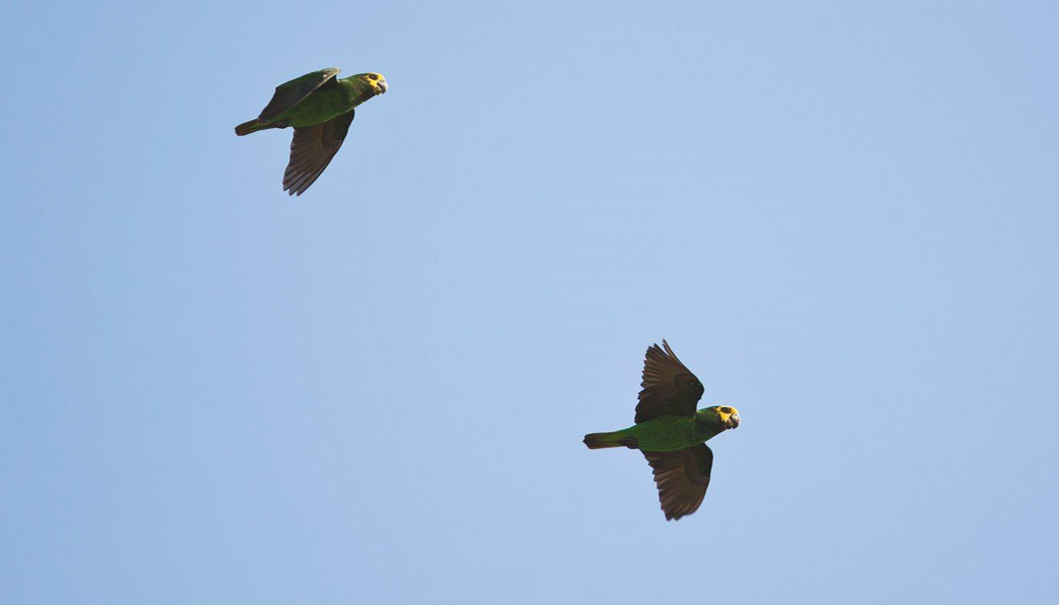 A pair of Yellow-fronted Parrots in flight (Mathias Putze).