Hills and mountains comprise about one-third of Britain's total land area. Restricted to the north and west, they provide some of our finest scenery, our most natural-looking landscapes – and some of our most exciting birds. Few appreciate that these landscapes are largely a result of human use: the destruction of the original wildwood followed by centuries of livestock grazing.

The term 'upland' refers to the uncultivated and largely unfenced land which occurs mainly above 240 m altitude, but extends progressively lower towards the north as the climate cools, down almost to sea level in parts of north-west Scotland. This land is still mainly used for livestock farming, but also for grouse shooting and deer stalking, all of which maintain an open landscape. Relatively small patches of indigenous woodland persist, but in the past century many open areas were re-afforested, mainly with non-native conifers. On the higher mountains, alpine tundra occurs above the former tree-line. 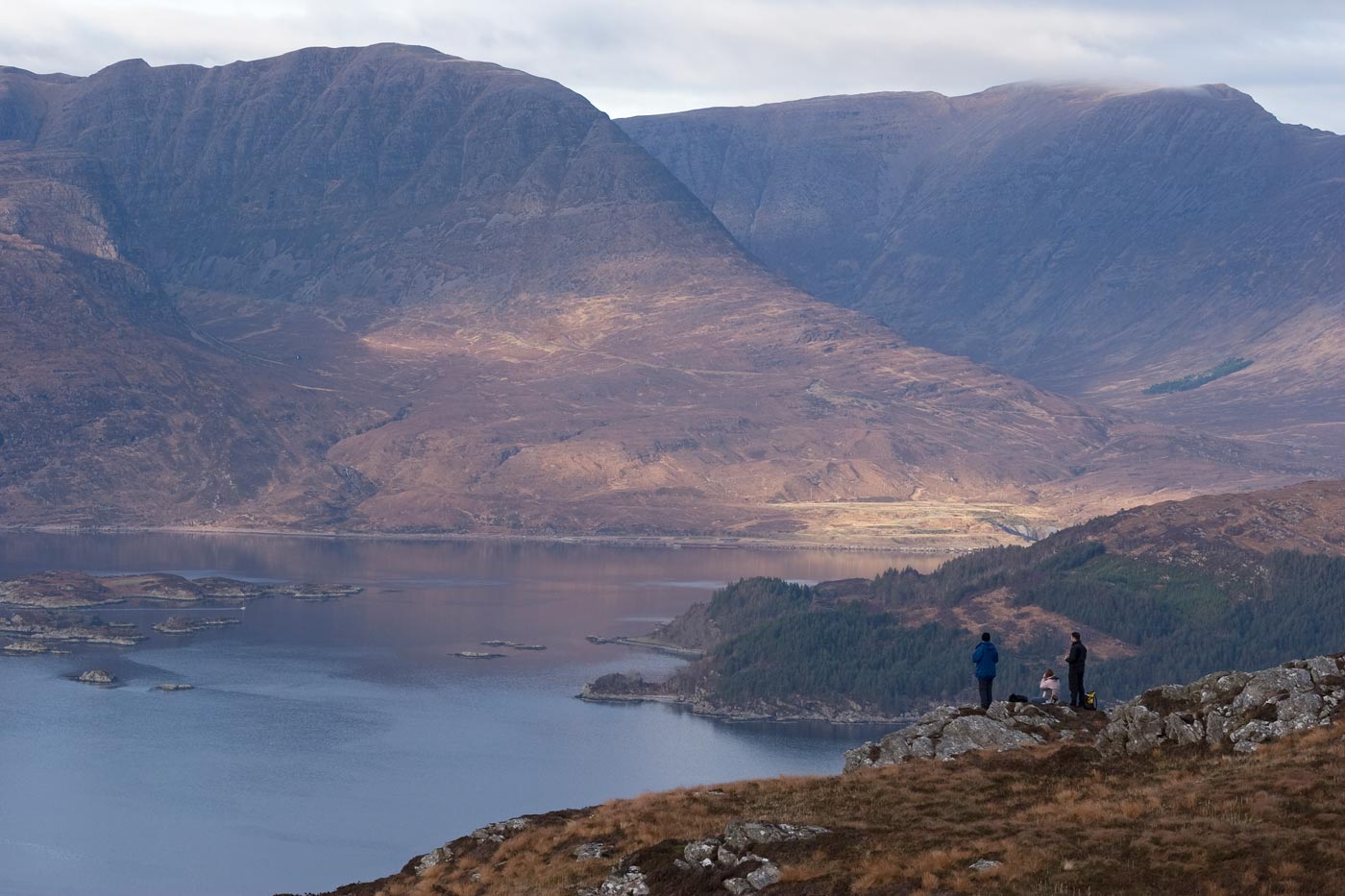 The Highlands offer a home to a variety of species, as well as relaxation and wellbeing to human visitors (Robin Chittenden).

At least 138 bird species now breed regularly in the uplands of Britain, comprising 88 on open land (including wetland) and about 50 in woods and forests. Around a dozen species now breed only in the open uplands as defined here, namely Red and Black Grouse, Ptarmigan, Golden Eagle, Hen Harrier, Merlin, European Golden Plover, Eurasian Dotterel, Wood Sandpiper, Greenshank, Ring Ouzel and Snow Bunting. In past centuries, some of these species also bred in the lowlands, but disappeared from there through human impact of one form or another. 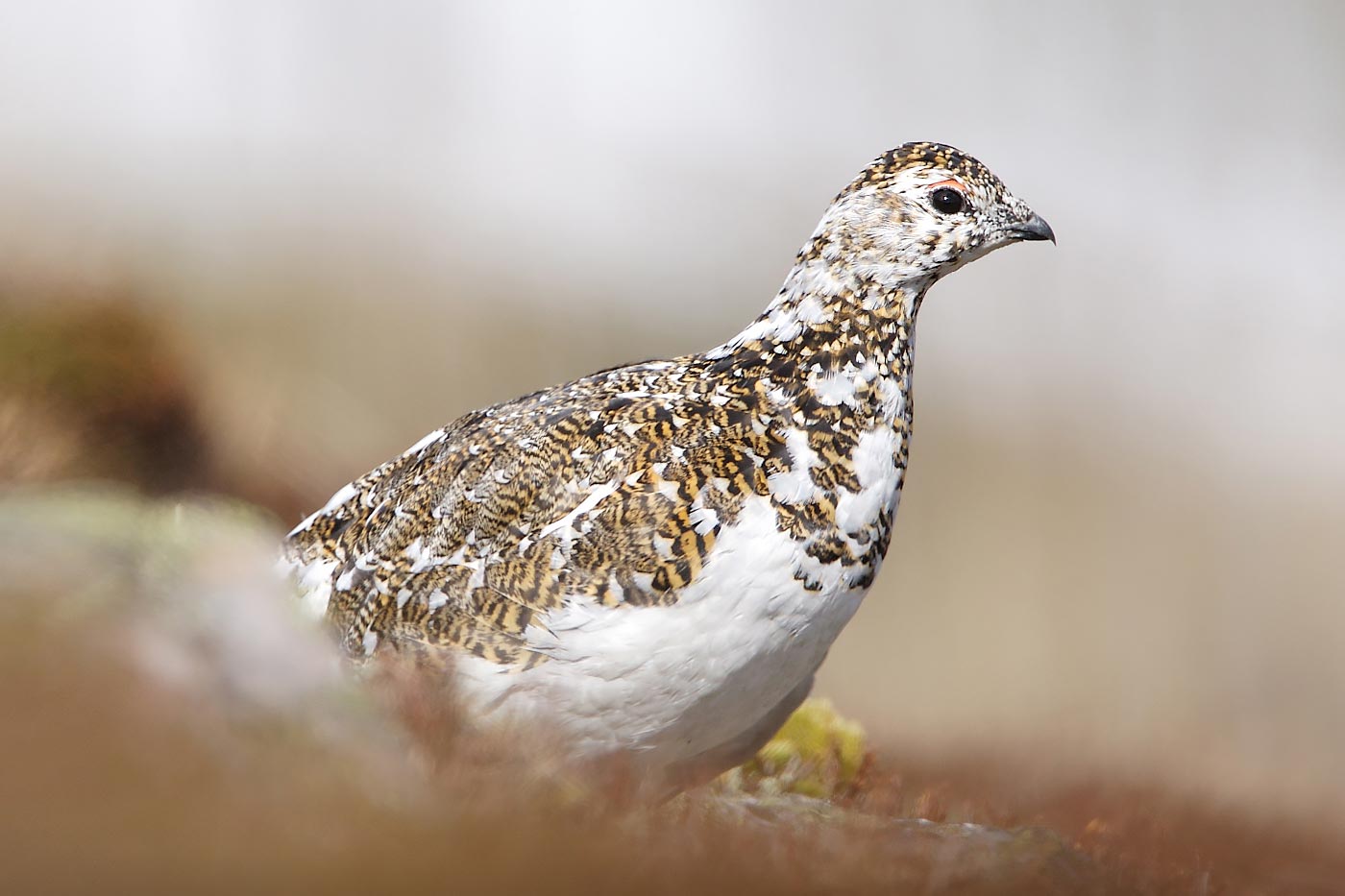 Ptarmigan breeds in isolated populations in the Scottish uplands, and is found nowhere else in Britain (Ashley Grove).

Few upland species breed over the whole latitudinal span of Britain, and there are marked regional variations in species numbers and composition. Surprisingly, on the open uplands, species numbers increase from south to north – from around 46 in the uplands of south-west England to some 62 in northern Scotland. A similar trend is apparent in upland waterbirds, from 14 species in the south-west to 26 in the north.

These trends arise partly because upland-type habitats near sea level at places in the north attract some seabirds – mainly skuas and gulls – to nest on moorland. It is also because several open-land and aquatic species reach the southern edge of their European breeding range in northern Britain and do not extend further south. Examples include Great and Arctic Skuas, Greenshank, Whimbrel, Common Goldeneye, Slavonian Grebe and Red-throated and Black-throated Divers. At the other geographical extreme, Dartmoor marks the southern limit to the world breeding ranges of European Golden Plover and Dunlin, while Exmoor is the most southerly breeding location for Merlin in Europe.

In contrast to open-land birds, the numbers of woodland or scrub species in the uplands are about the same throughout (42 in the south-west and 43 in the north), although again the composition of the woodland avifauna changes regionally. The best chances of seeing Crested Tit, Scottish Crossbill and Western Capercaillie are in the native pinewoods of the Scottish Highlands. 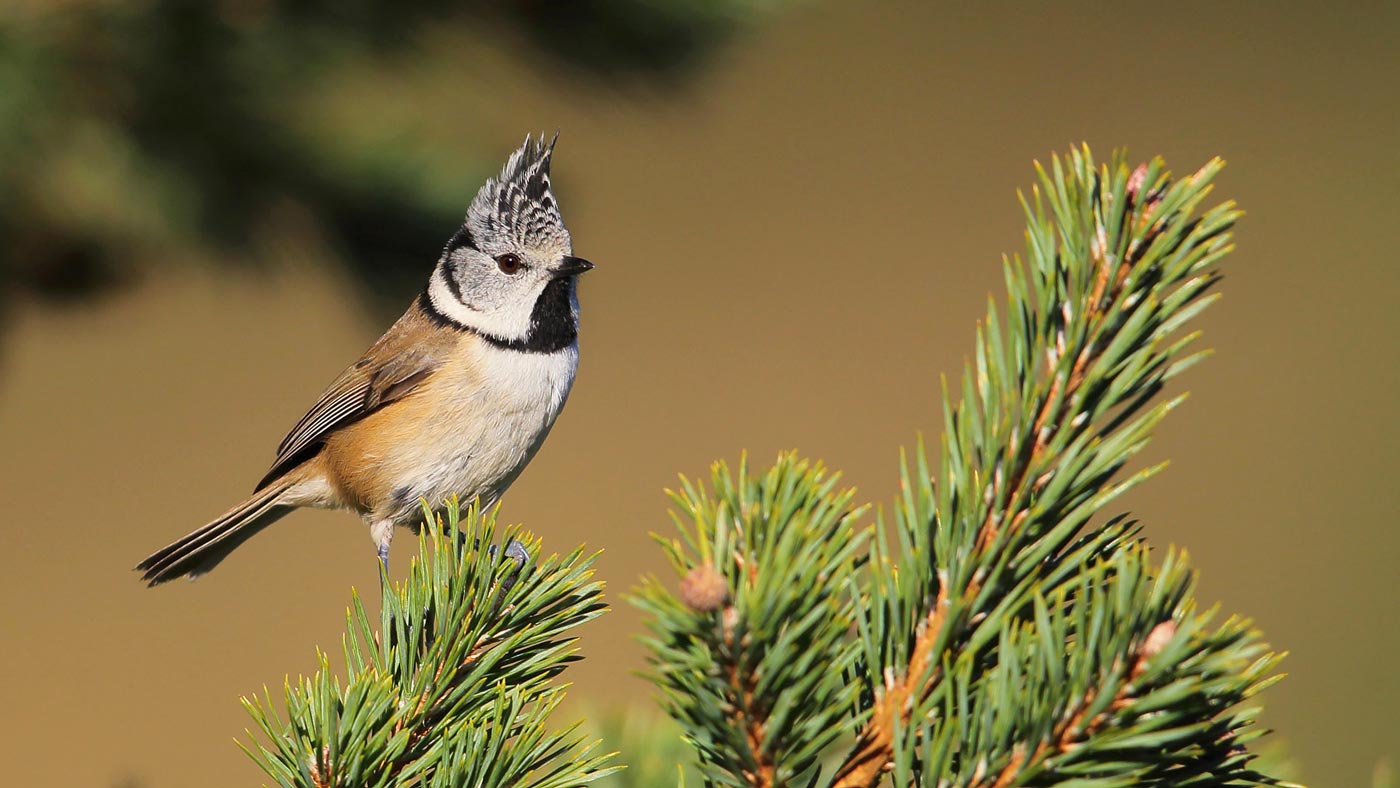 Scotland's native pinewoods offer the only chance of seeing Crested Tit in the UK (Bill Baston).

Developments in hill farming from the 1960s led to huge adverse impacts on bird populations, mainly through land drainage and its associated changes, reduction in hill cattle and the massive increase in sheep densities. Drainage reduced the suitability of vast areas for waders and other birds of damp ground, while the changes in livestock led to alterations in sward structure, making it less suitable for many ground-nesting species.

Through their grazing and trampling, cattle create a mixed sward comprising patches of short and tall vegetation, ideal for birds such as Eurasian Curlew and some other waders. The dung pats of cattle support insects which once provided a major food source for wader chicks, as well as adults. In contrast, sheep tend to graze some areas flat as a lawn, while leaving sizeable clumps of tougher vegetation largely untouched. Their high-density grazing gradually destroys heather and on drier ground encourages bracken to spread. Sheep dung supports far fewer insects than that of cattle. 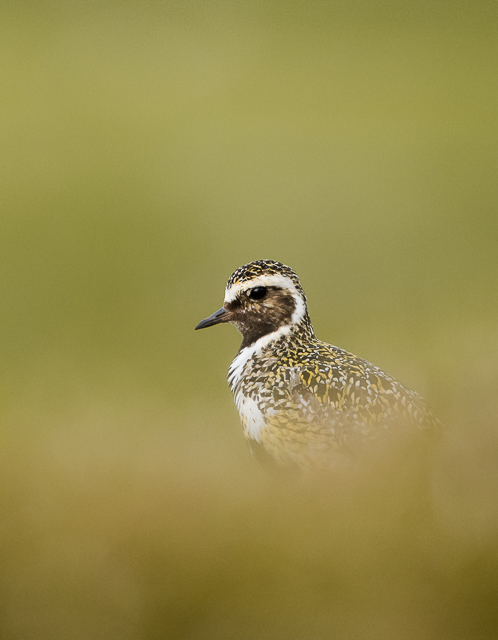 Ground-nesting birds such as European Golden Plover have declined due to intensive sheep farming (Dave Collins).

All these changes reduce the numbers and variety of species which can breed successfully on open hill land. Moreover, the losses of nests to trampling increase with livestock densities, and sheep also seem to eat any bird eggs they come across. In view of these changes, it is not surprising that, since the 1960s, most ground-nesting birds in the open uplands have declined.

The main exceptions occur on grouse moors, where sheep numbers are kept at low levels or are allowed on only for short periods. Together with predator control, this ensures that most ground-nesting species can breed well enough on grouse moors to maintain their numbers there.

During this period of intensive management, many sheep were kept on the hills year round, and their mortality was often high, especially in hard winters. This resulted in an abundance of carrion, which supported large numbers of scavenging birds. For example, in central Wales in the 1970s, sheep mortality provided 190 kg of carrion per square kilometre per year, with the main avian beneficiaries being Carrion Crow, Raven, Common Buzzard and Red Kite. All these species prey on the eggs or young of ground-nesting birds.

Similar figures were recorded elsewhere, and in Scotland it emerged that the breeding densities of Golden Eagles in different districts were correlated with the amount of winter carrion available (here both sheep and deer). Yet again, government agricultural policy – enacted partly through the payment of subsidies – had direct and indirect impacts on bird populations. 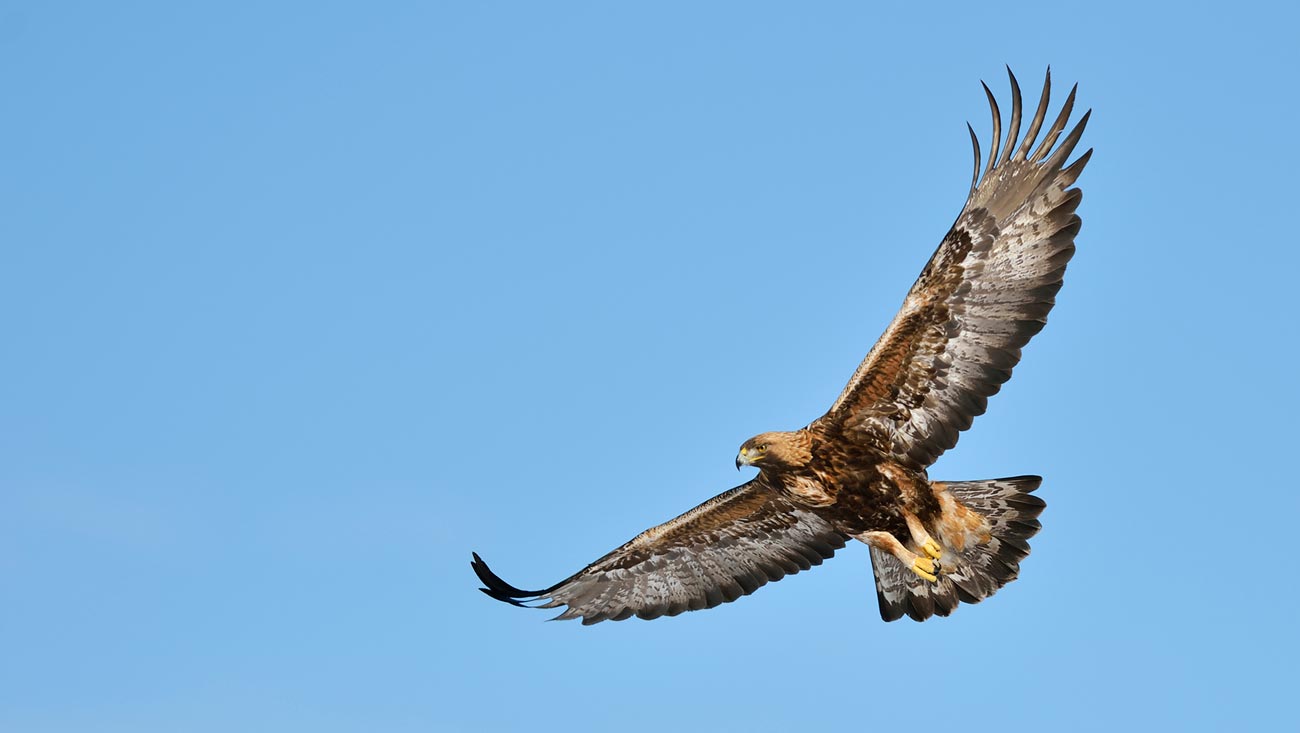 The main issue surrounding grouse moor management, as every birder knows, is the illegal killing of raptors. Hen Harriers at the densities they can achieve on some grouse moors can reduce the numbers of grouse available for shooting, making the enterprise uneconomic. High densities of harriers can also reduce the numbers of some waders and other ground-nesting birds. Whether other birds of prey have similar effects is less certain, but much depends on the numbers of grouse-eating raptors of whatever species present. Raptor predation on grouse remains an unresolved issue, but if grouse moors were to disappear, this favourable habitat for many bird species would go too, as the land becomes converted to some other use, most probably plantation forestry.

In the infertile uplands of north-west Scotland devoted primarily to deer stalking, problems have resulted mainly from the high densities at which Red Deer are maintained, with their consequent over-grazing of vegetation. Over wide areas, this has prevented any natural tree regeneration and left relatively little food or habitat for ground-nesting birds. On the other hand, predator control tends to be lower on deer ground, and Golden Eagles and other raptors breed largely free of persecution, benefiting from the deer carrion, grallochs and afterbirths available. 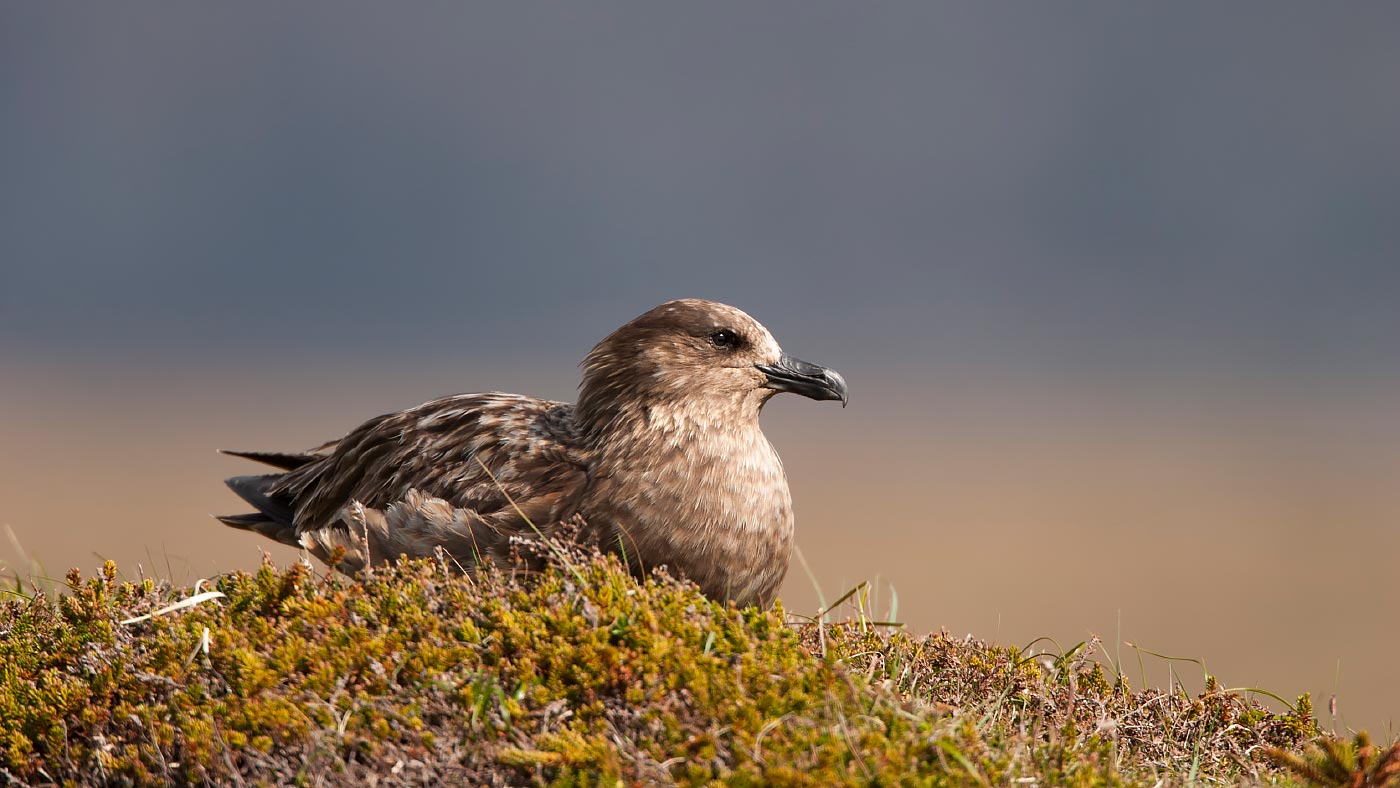 Great Skua is one of a handful of seabirds that are attracted to the open uplands of the northern UK (Oliver Smart).

The 20th century saw a rapid expansion of forest over upland Britain, mainly through the planting of non-native conifers. In 1940, only 6% of Britain was tree covered, but by 2000 this had risen to about 12%, and by 2015 to 14%. Conifer plantations now cover almost one-fifth of the total upland area, and there are plans for further planting in the coming years, especially in Scotland. In addition, patches of modified indigenous woodland still exist in the uplands, the largest blocks involving Scots Pine.

The planting of trees on open land leads in time to the replacement of open-land birds by woodland species. However, they also provide a secure haven for predators, notably foxes, which range out to hunt over neighbouring open land, gradually eliminating waders and other ground-nesting birds. These effects can extend far from the forest itself, and it seems that the future survival of many ground-nesting birds in Britain will depend on maintaining extensive areas of suitable open upland.

On the other hand, the new plantations have benefited not only some common woodland species, but have enabled some formerly localised ones, such as Common Crossbill and Eurasian Siskin, to spread widely over Britain. In their early growth stages, young plantations provide safe habitat for nesting Hen Harriers, and probably helped this species to re-establish itself in mainland Britain since the 1940s. When mature, these forests provide safe habitat for other raptors, such as Northern Goshawk and European Honey Buzzard. 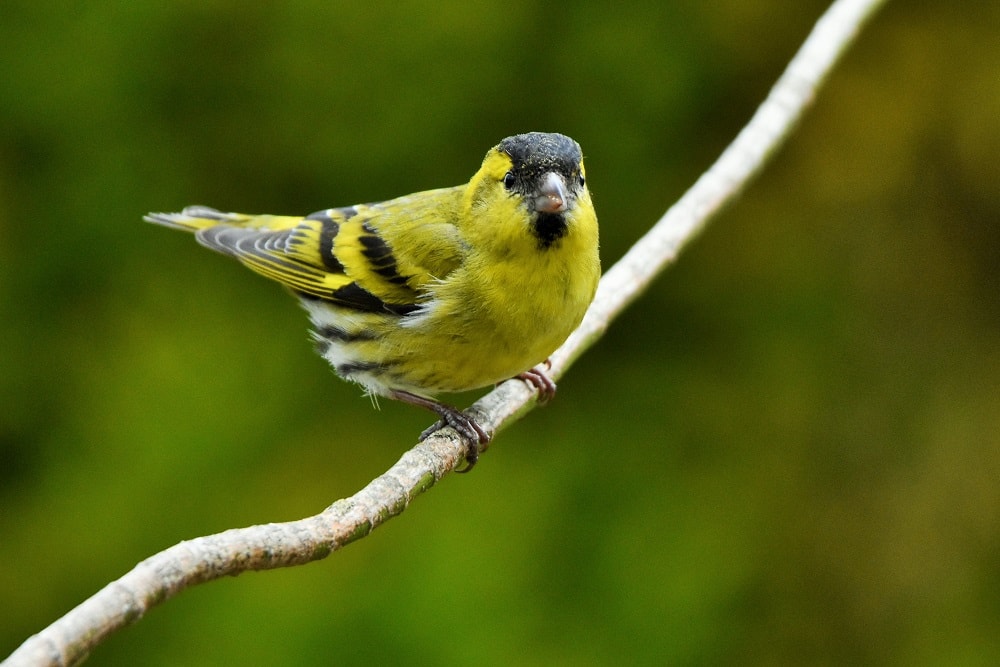 New plantations have helped to encourage the spread of previously localised birds such as Eurasian Siskin (Irene Harrison).

After centuries of deforestation and livestock grazing, the uplands are on the cusp of further change. Policies differ somewhat between the different countries of the UK, but there are increasingly heated discussions over rewilding, further planting of alien conifers, game management and raptor conservation, peatland restoration, and the roles of hill farming, tourism and renewable energy developments.

As things stand, the uplands provide less than 1% of our food (mainly as sheep meat), less than 10% of our timber needs, but around 70% of our drinking water, and their deep peat soils hold more carbon than any other habitat in Britain. In addition, millions of people visit these places each year in search of relaxation, inspiration and a sense of solitude. For many people, birds are an important component of this experience. As in the recent past, future land-use policy will have huge impacts on native wildlife, including bird populations. The most certain change is an increase in forest areas. As birders, we all have a stake in future land-use policy, and the issues are seldom clear-cut.

Ian Newton is a well-known and respected ornithologist and author. He has written several books for the New Naturalist series.