They weigh less than two spoonfuls of sugar, but migrant warbler species routinely carry 'time capsules' of their travels around the world. Academics at the University of Gloucestershire have been working on unlocking their secrets via these time capsules, and finding out more about exactly where the birds go on their migratory travels.

Arriving in the United Kingdom from each spring from the Mediterranean and sub-Saharan Africa, species such as Chiffchaff and Willow Warbler frequently carry sticky encrustations on the feathers around their bill from foraging on the insects and nectar of flowers. These encrustations, with which many birders will no doubt be familiar, provide a 'time capsule' of their recent behaviour. 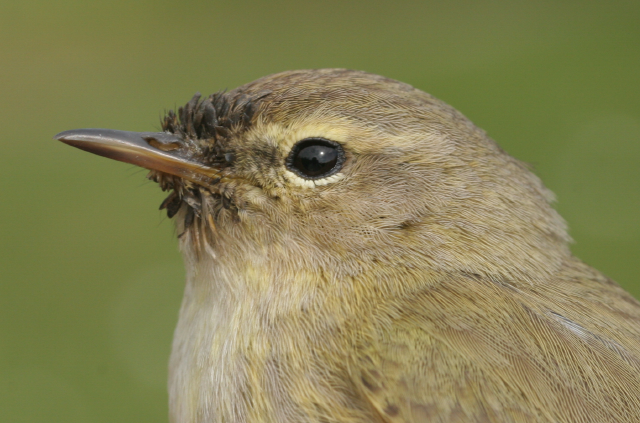 Chiffchaff carrying dark Eucalyptus pollen 'horns' around the base of the bill (Photo: Martin Cade).

Ecologists, ornithologists and pollen experts from the university's Biosciences team and the Centre for Environmental Change and Quaternary Research teamed up with the Portland Bird Observatory in Dorset to study the pollen carried by four species of warbler — Chiffchaffs, Willow Warblers, Blackcaps and Garden Warblers. Pollen from 19 different types of plant was found, dominated by eucalyptus and citrus pollen presumably from plantations in North Africa, Spain and Portugal. Each bird species carried a different suite of pollen types, indicating their different foraging behaviour.

The research abstract describes how commercial and garden flowering trees are an important resource for migrating warblers. The information gathered by researchers may help to inform planting and conservation decisions at stopover sites, giving the birds some extra support on their long journeys. The abstract can be read below:

Capsule Pollen encrusted around the bill of migrating warblers can reveal marked differences in foraging ecology between bird species.

Aims: To examine patterns of the prevalence and diversity of pollen in four species of warbler, and explore the potential of pollen to act as an indicator of recent foraging behaviour.

Methods: By isolating pollen from bill encrustations using laboratory palynological techniques and identification by light microscopy, we examined variation in the prevalence of the five most common pollen taxa, and variation in pollen assemblages in four species of warbler arriving on the south coast of England.

Conclusion: Commercial and garden flowering trees are an important resource for migrating warblers. Pollen may be such a valuable resource that flowering plants might be included in the conservation management of stopover sites. The use of pollen to resolve migratory routes may be problematic, however, requiring detailed knowledge of both the distribution and flowering phenology of plants en route.

Project leader Dr Matt Wood, Senior Lecturer in Biosciences, said: "This study highlights the importance of forestry plantations and fruit growing for these tiny long-distance travellers — migratory warblers are vulnerable to habitat change as they rely on sites with plenty of insect food to breed in the UK, to survive the winter further south and to refuel while on migration."

For a copy of the paper in full, readers are encouraged to contact Dr Wood via email.