Trindade Petrel in Cornwall – a potential first for Britain

Sunday 12 July was one of the most eagerly anticipated in Cornwall for some time, particularly given the relentless north-easterlies we’d suffered in summer 2018. A combination of good numbers of large shearwaters seen over the previous days, and the front and associated rain arriving on cue, meant expectations were high. Rain had continued as light squalls for most of the morning and the numbers of Cory's, Sooty and Great Shearwaters climbed steadily up to midday.

In addition was an altogether different seabird, and Ray Archer did well to call it as a gadfly petrel when it appeared at 12:08. Calling "Fea's!" is natural for anyone used to seawatching from British shores – no other Pterodroma would be on your radar – and it did the job, with almost everyone quickly on the bird.

Even those without previous experience of Fea’s-type Petrels in the field will have seen plenty of photographs, but this bird just didn’t conform, to the point that several birders (myself included) actually took our eyes off it, temporarily thinking we were looking at the wrong bird! 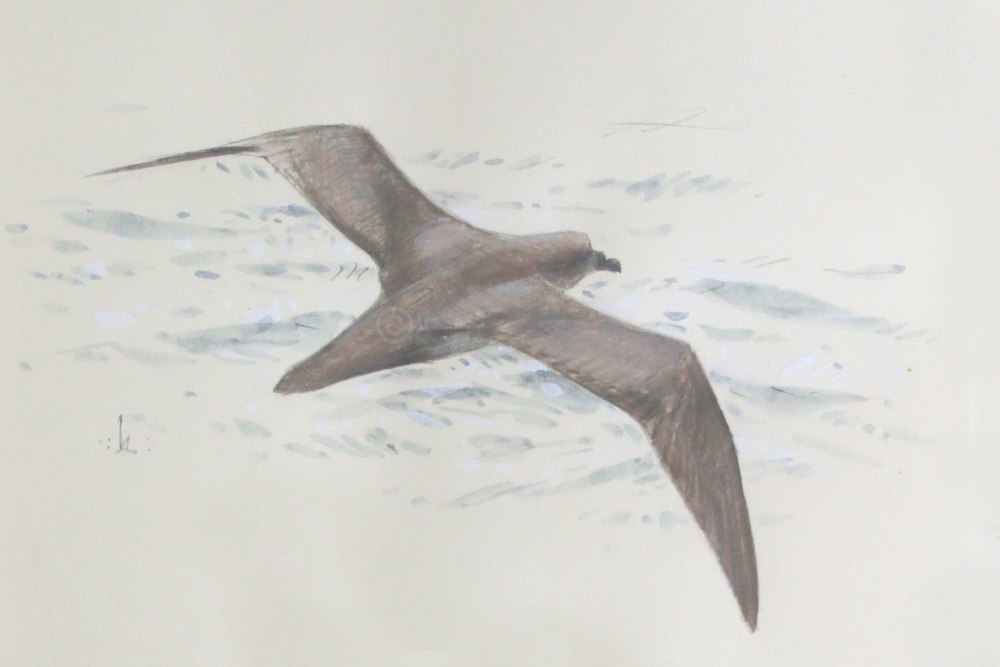 The bird was between Manx and Sooty Shearwaters in size and was 'rangy' and slim with long, narrow wings and narrow, pointed primaries. The tail was relatively long, narrow and slightly pointed or graduated, projecting more than the head and neck. In silhouette, the bird's head and neck were obviously 'wrong' for Fea's: the head looked small, tapering rapidly from the shoulder, and ended in a short, steep forehead above the bill. The latter was deepest at the base, with longish nasal tubes and the middle looking pinched in before a blob-ended tip – certainly none of the bull-necked, hatchet-billed appearance of Fea's-type.

The lack of contrast on the upperparts was striking, though at certain angles a faint 'M' mark was visible, possibly because the greater and secondary coverts were slightly paler. Once the bird became better lit, the upperparts proved to be uniform dark brown – crucially without any pale primary shafts. A few noted a strip of white along the underwing coverts that joined the inner primary coverts and primary bases, though personally I only saw the latter and assumed it had been due to direct sunlight, the underwing looking very dark and contrasting with the white body. Again, crucially, the undertail coverts were not white to the tip (as in Fea's-types) but were dark brown, shading slightly paler to the rear flanks. The head looked hooded or almost uniformly dark when against the light or in shadow, but when well-lit showed a diffuse paler chin and throat and darker neck sides, with the paler crown emphasising the small-headed appearance. It was hard to judge the extent of brown on the neck looking down on the bird, but was probably complete across the upper neck. 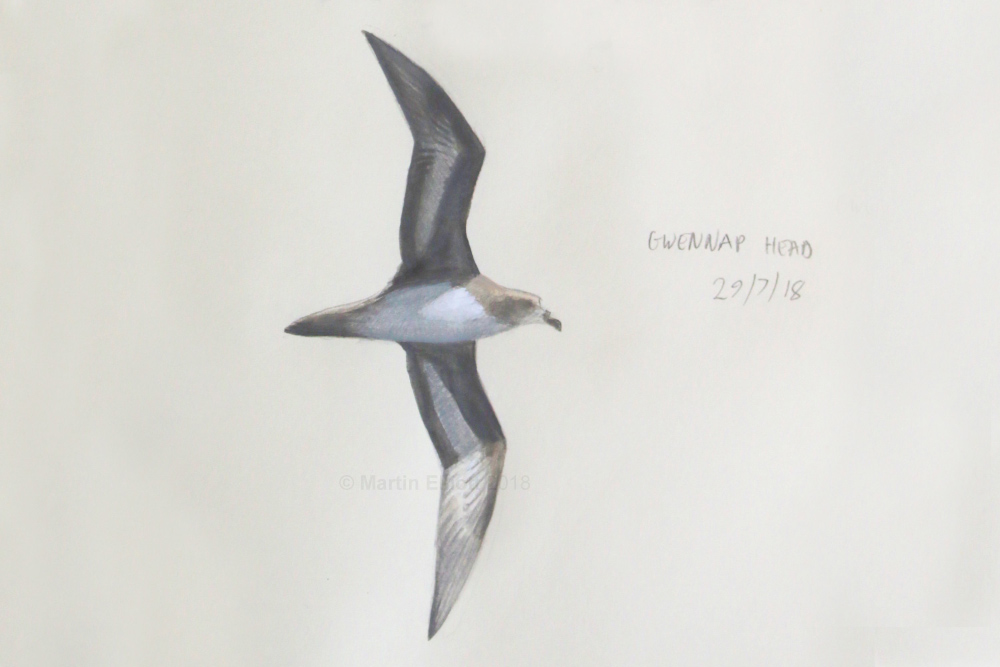 The bird's flight was distinctive: a continuous series of almost elastic-looking flaps, not as rapid as Manx, being slightly deeper and more like Sooty Shearwater, though without the latter's power and obvious curling or flexing of the primary tips. It kept low to the water and did not shear or glide more than brief banking over the wave crests, which meant the underparts were hard to see.

The combination of uniform brown upperparts without pale primary shafts, white underbody with dark undertail coverts, dark underwing with white band on the secondary coverts, inner greater primary coverts and primary bases, small, relatively uniform brownish head with paler throat, and longish narrow tail can only be shown by pale-morph Trindade Petrel. The only other taxa which come close are Herald Petrel from the Pacific (with which Trindade was previously lumped) but they do not show as much white on the underwing coverts, or Trindade Petrels breeding on Round Island in the Indian Ocean – both alternatives being far-fetched to say the least. Trindade, however, is regular off the Eastern Seaboard of the United States and has occurred in the Eastern North Atlantic on several occasions, with at least a dozen documented records from the Azores. 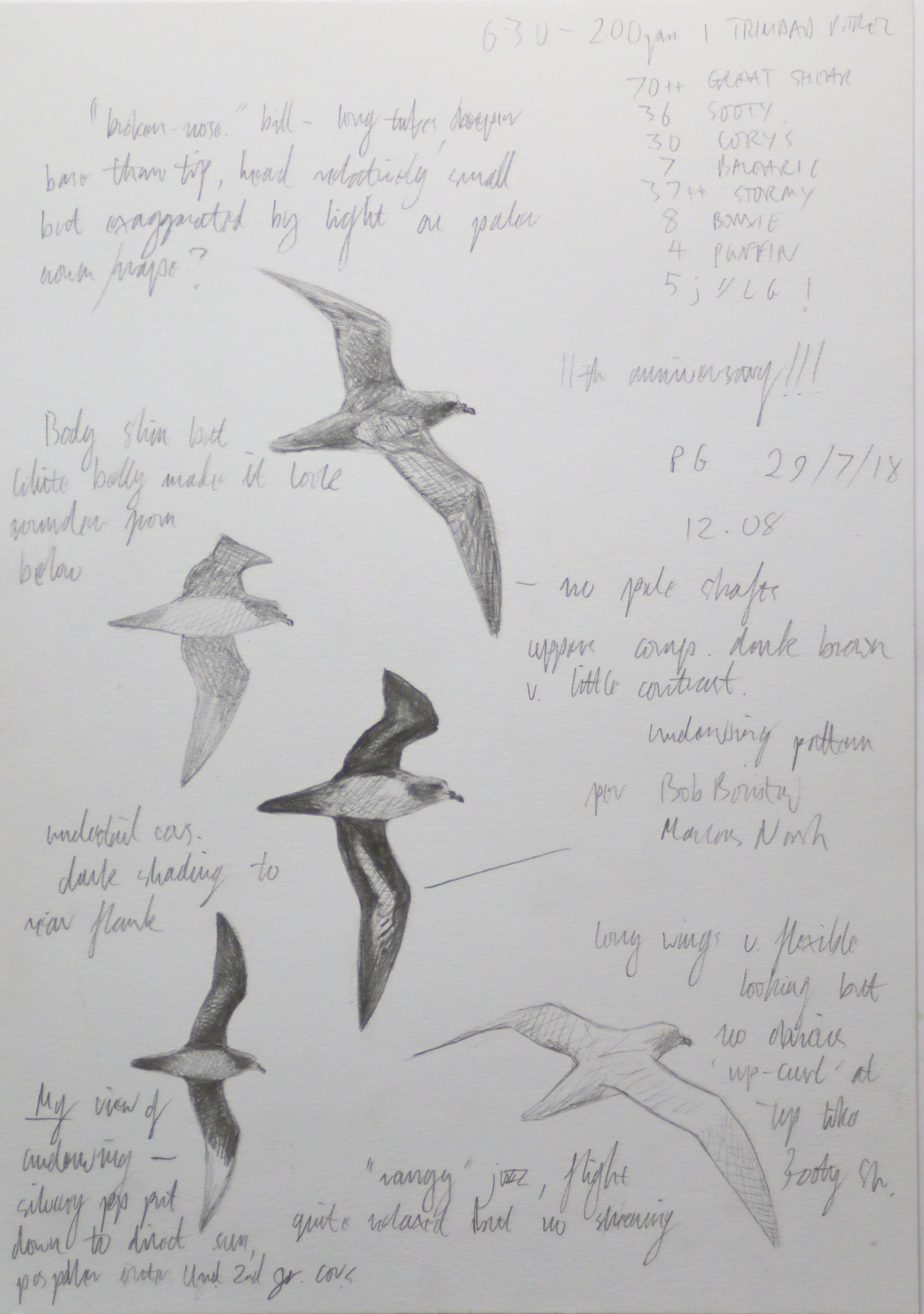 There is a curious prequel to this record. I was the first to call this bird as a Trindade Petrel, just before it disappeared. Luckily everyone there got on the bird anyway, but its identity should have occurred to me much sooner. As far as I know, I was the only person there who had seen the species before, and I had joked with Paul St Pierre and Mark Wallace as we drove to Gwennap that it was the 11th anniversary of a previous encounter at the same site. As it turns out I had misremembered the date, but on 19 July 2005, with John Foster and Colin Moore, we witnessed a near-carbon copy of Sunday's events. We had been watching a reasonable passage of Cory's Shearwaters when I picked up a Pterodroma, which I assumed was a Fea's-type, following almost the exact line and flying in the same manner as the 2018 individual.

The light was slightly worse so views were not as good, but the same confused thought processes went through our minds as we tried to fit what we saw into what we expected from Fea's-type. Unfortunately, at the time far less reference material was available on gadfly petrels as a group, let alone Trindade, so we had to resign ourselves to the bird being unidentified. I had consulted Steve N G Howell and gave him a poor verbal description which suggested Atlantic Petrel to him but, judging from the few photographs of that species, it did not fit either. It was years later that JF came across images of a presumed Trindade Petrel off Cape Verde and we found our solution, a conclusion that has become reinforced with references such as Howell's Petrels, Albatrosses and Storm Petrels of North America and now, finally, with the remarkable 'second coming' on Sunday!