The zodiac scrunches against the gravel and we clamber out, wading up the beach, the sun warm through our waterproofs. The tundra stretches before us like a mossy green carpet, sprinkled with multitudinous flowers. The white tufts of Arctic Cotton dot the wetter parts, where pools of still water reflect the azure sky. As we splash our way inland, Long-billed Dowitchers fly around us keek-ing loudly, their red breasts vivid in the sun as they turn. Far-off flocks of Snow Geese dust the tundra ahead like patches of sugar icing. 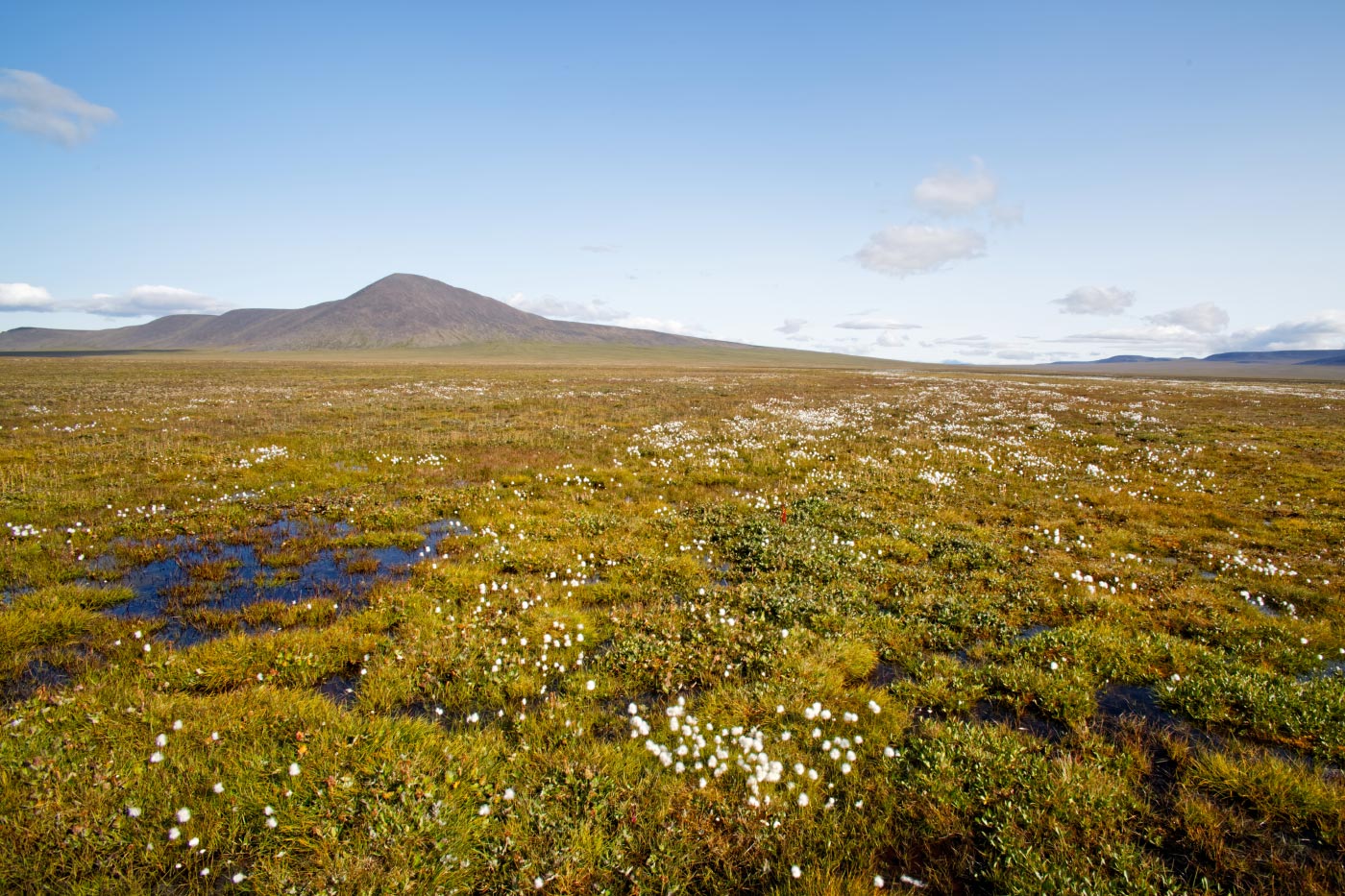 We are not in North America, but at Dream Head on the western coast of Wrangel Island in the Russian Far Eastern province of Chukotka, almost exactly on the 180-degree meridian. These Nearctic birds and many others have crossed the Bering Strait (only 51 miles across at its narrowest) to make their home here in the Palearctic. Wrangel is 90 miles from the northern Chukotka coast and 310 miles from the nearest part of Alaska, only a few hours more flying for migrants which have already come from the southern USA or further south. 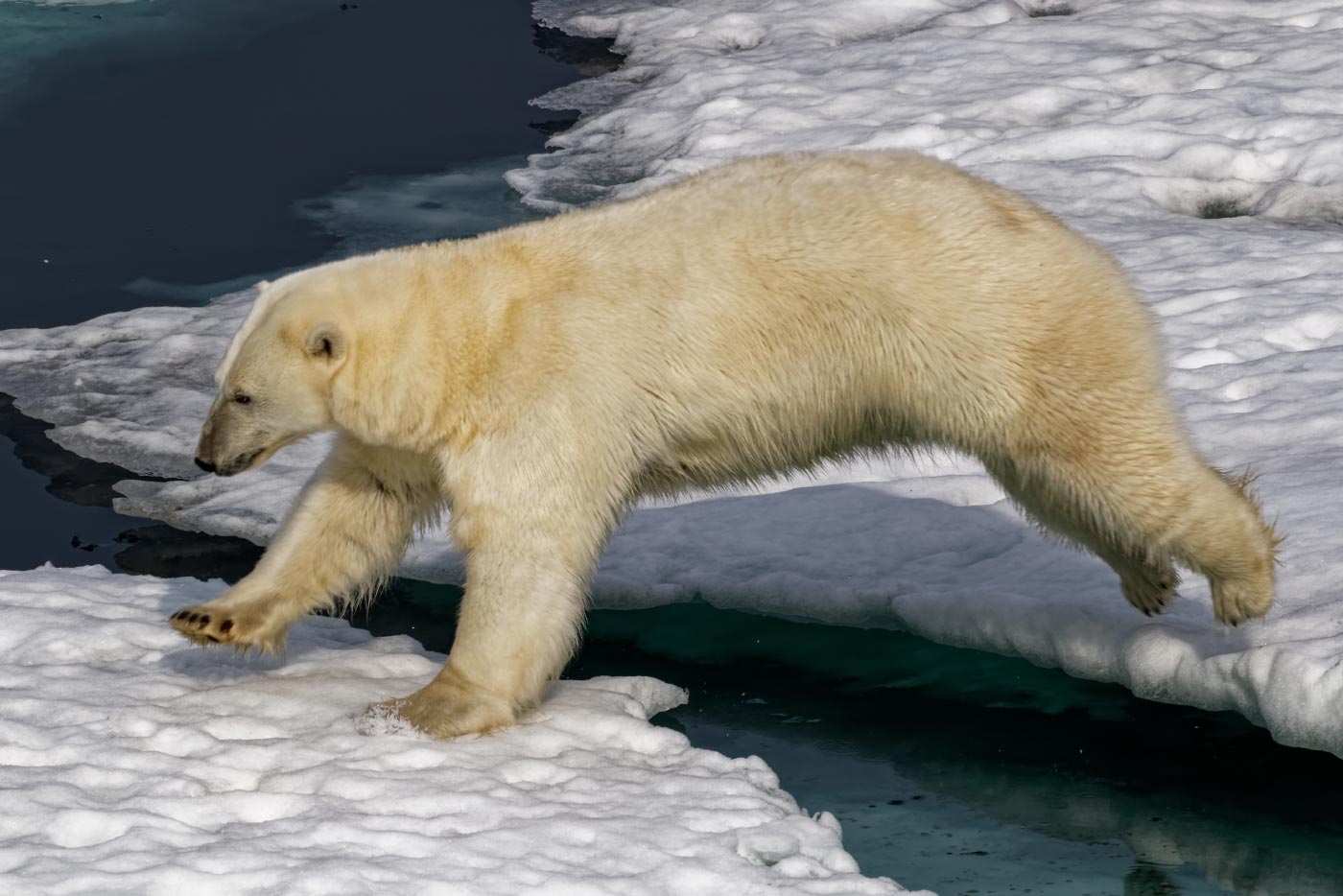 Polar Bear leaping between ice floes to get closer to our ship, south of Wrangel Island (Rod Standing).

This is one of the most pristine environments on the planet, protected by its remoteness and difficulty of access. Much of the wildlife has never seen a human before. As our ship, the icebreaker Kapitan Khlebnikov, chartered by Heritage Expeditions, navigates the lingering pack ice south of Wrangel we stop for Walruses and Polar Bears. Some of the bears approach the stationary vessel curiously, sniffing the air and jumping from one ice floe to another to get a closer look. 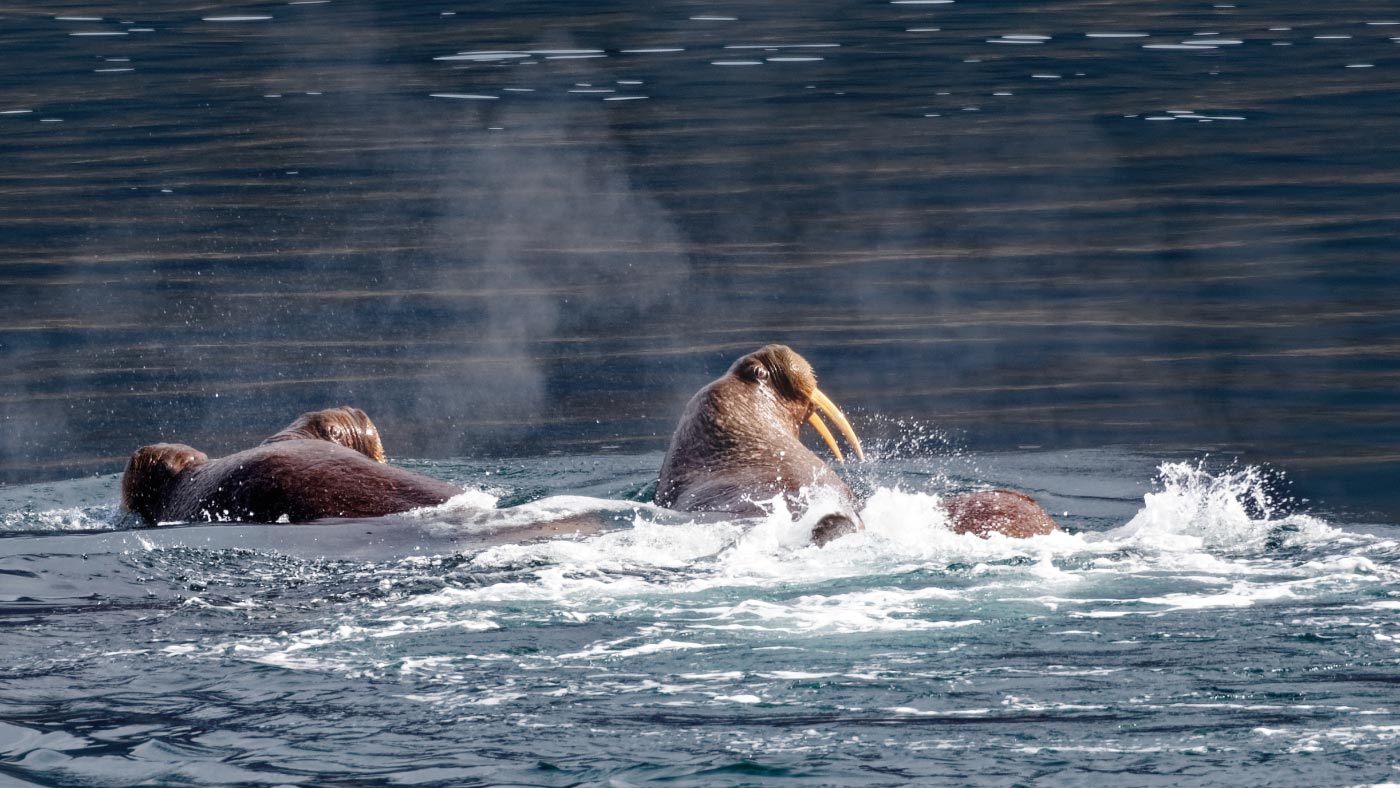 Walruses breathing heavily, putting distance between themselves and the ship, off Wrangel Island (Rod Standing).

Wrangel has the world's densest population of Polar Bears and we see no fewer than 50. Walruses however are still sometimes hunted by the local people, and they splash into the water before we are too close, their breath hanging in the air as they surface and dive again. As we approach the Wrangel coast two Sabine's Gulls patrol the ice pack and a Black Scoter dives between the ice-floes. 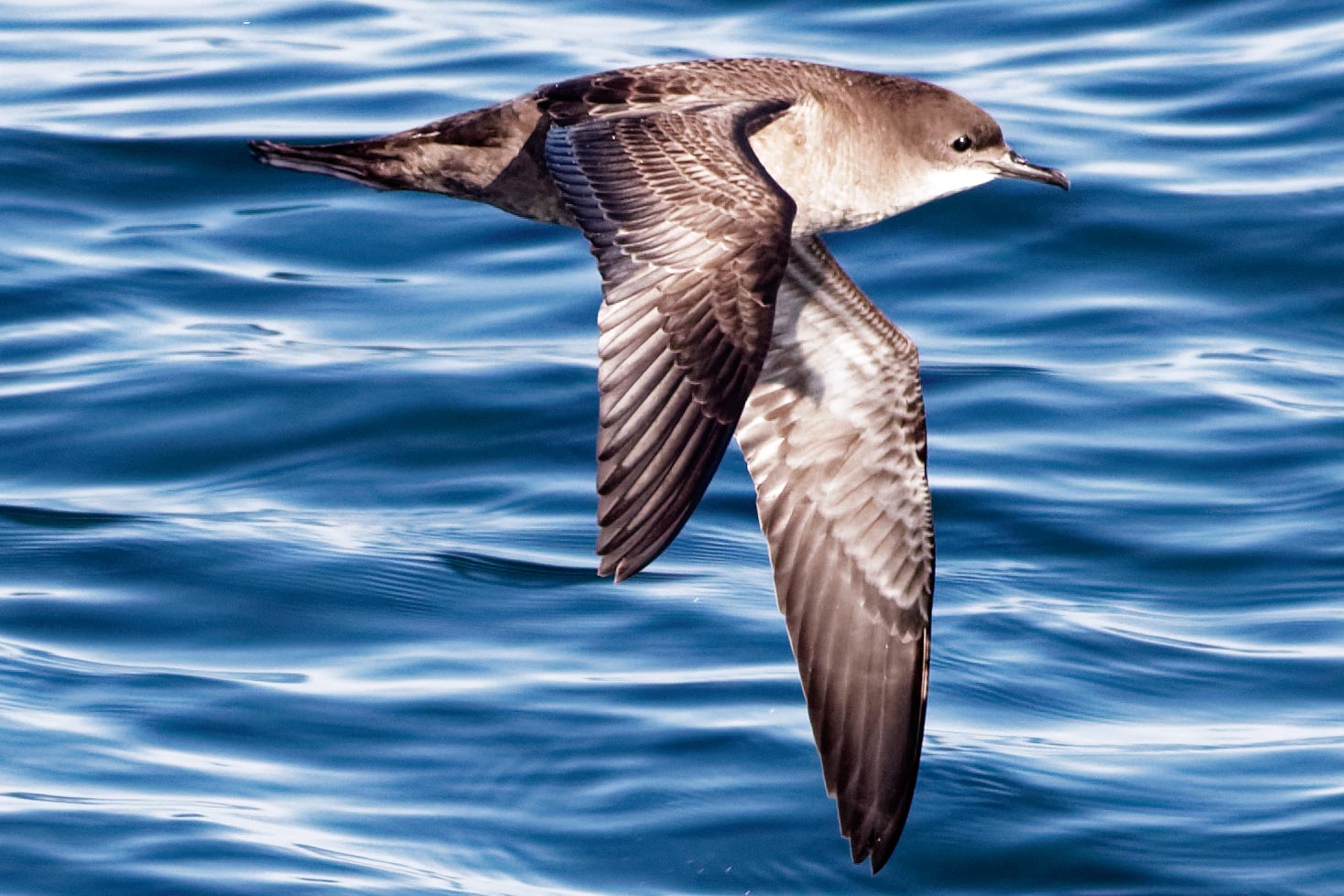 Short-tailed Shearwater is by far the commonest bird in summer in the Chukchi Sea (Rod Standing).

Not only continents but oceans meet here – the Pacific and the Arctic. Whales, fish and seabirds migrate north through the Bering Strait in the northern summer to feed and breed in the cold, clear and shallow waters of the Chukchi Sea (the part of the Arctic Ocean bounded by Wrangel Island in the west, Alaska in the east and the Chukotka mainland to the south). The weather here is notoriously changeable, and it is foggy as the 'KK' slowly passes Cape Dezhnev, the easternmost point of the Eurasian landmass, which looms over the Bering Strait through the patchy mist. Thousands of Short-tailed Shearwaters are resting on the sea, waiting for the next shoal of prey to be identified. Soon they will head back south to cross the Pacific to their nesting islands off Australia and New Zealand. 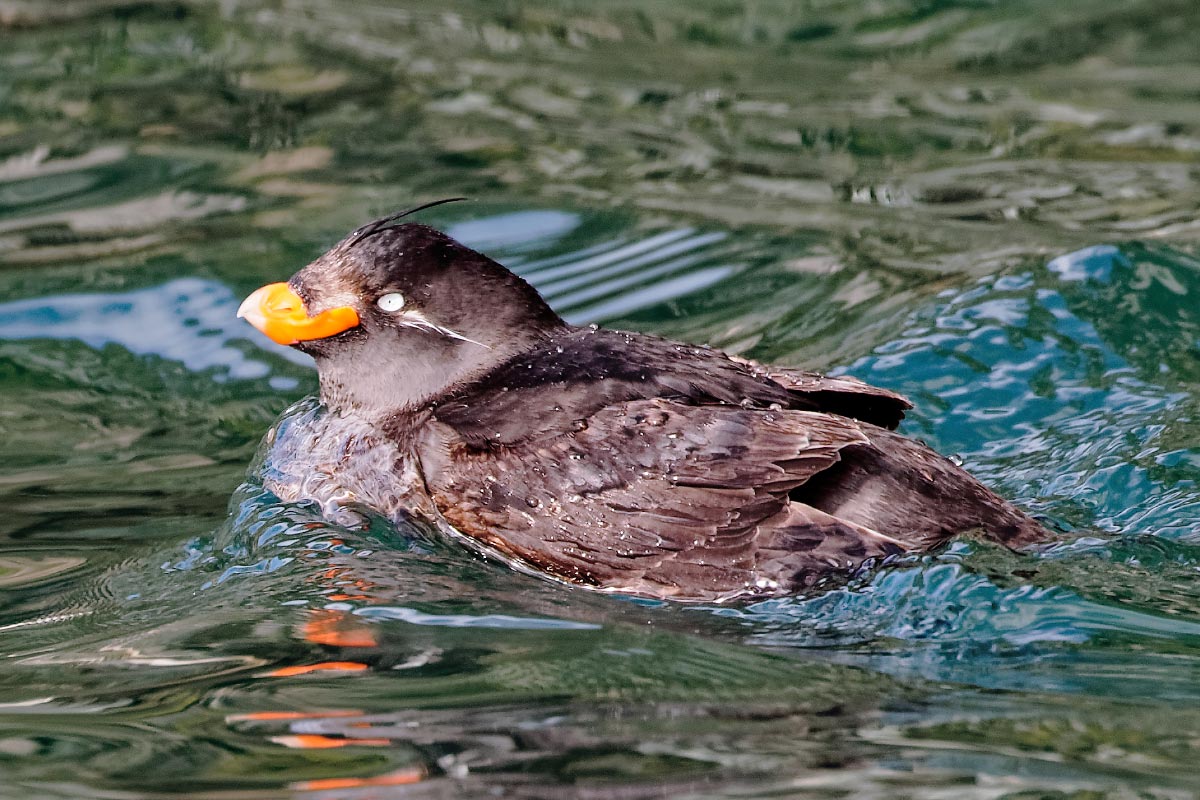 Crested Auklets are among the most numerous seabirds in the world and are abundant in the Bering Sea in summer (Rod Standing).

Above and between the shearwaters fly endless skeins of Crested Auklets, streaming towards their nesting cliffs, accompanied by smaller numbers of Least Auklets and a few Parakeet Auklets. Grey and Red-necked Phalaropes have already started moving south and many flocks bob and spin on the water, their high-pitched 'chip' calls alerting us as they fly up from under the bows. Flocks of Pacific and King Eiders also pass, most of the males already in eclipse but a few of the latter still displaying their finery. Further north, out of the sight of land, a Pacific Diver flies north-west over us to an unknown destination and some members of the party are joined on deck by a resting Rock Sandpiper. 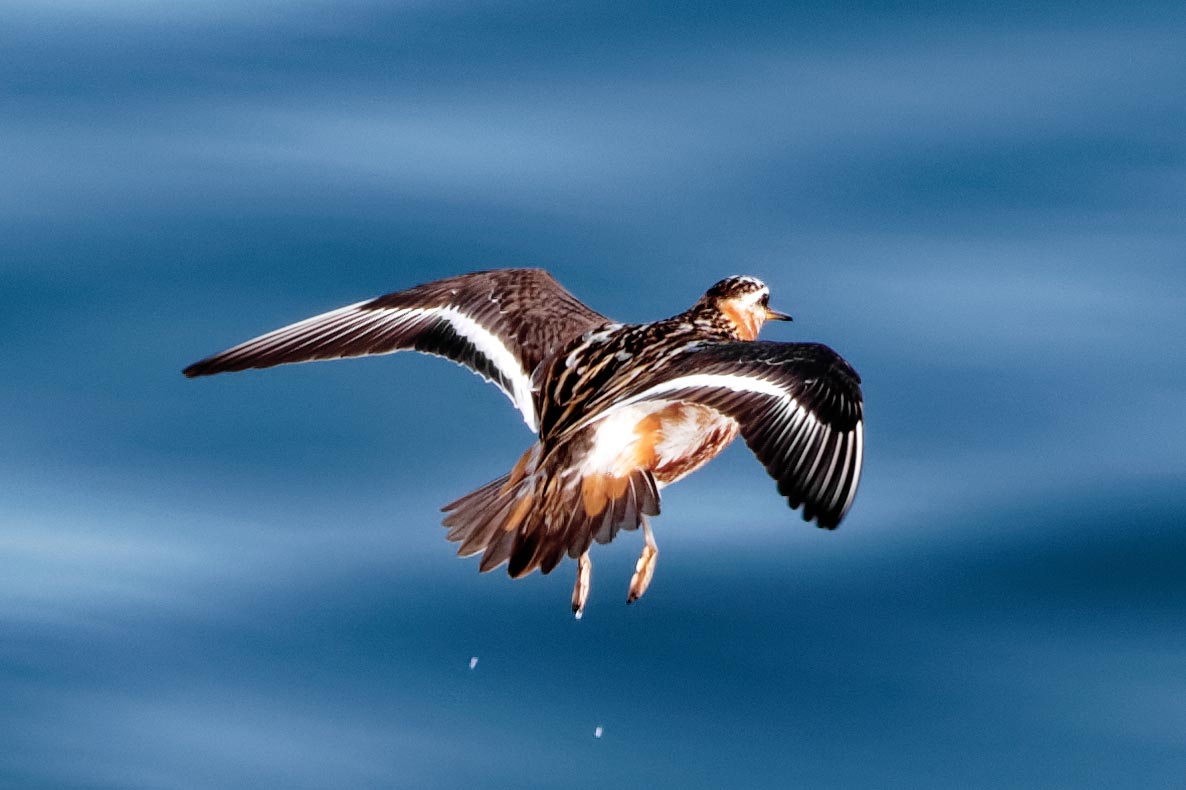 Moulting Grey Phalarope flying up from under the bow of the ship, Bering Strait (Rod Standing).

Perhaps the biggest avian surprise of this remote region on the other side of the world is the unexpected familiarity of many of the birds. Apart from the Short-tailed Shearwaters and (near the Bering Strait itself) the auklets, the commonest seabirds are Kittiwakes and Northern Fulmars, both very familiar to birders in north-west Europe and northern North America. Black, Common and Brünnich's Guillemot, Ruddy Turnstones, Glaucous Gulls and Pomarine Skuas are all widespread and numerous here. On land, Snow and Lapland Buntings are the commonest passerines. 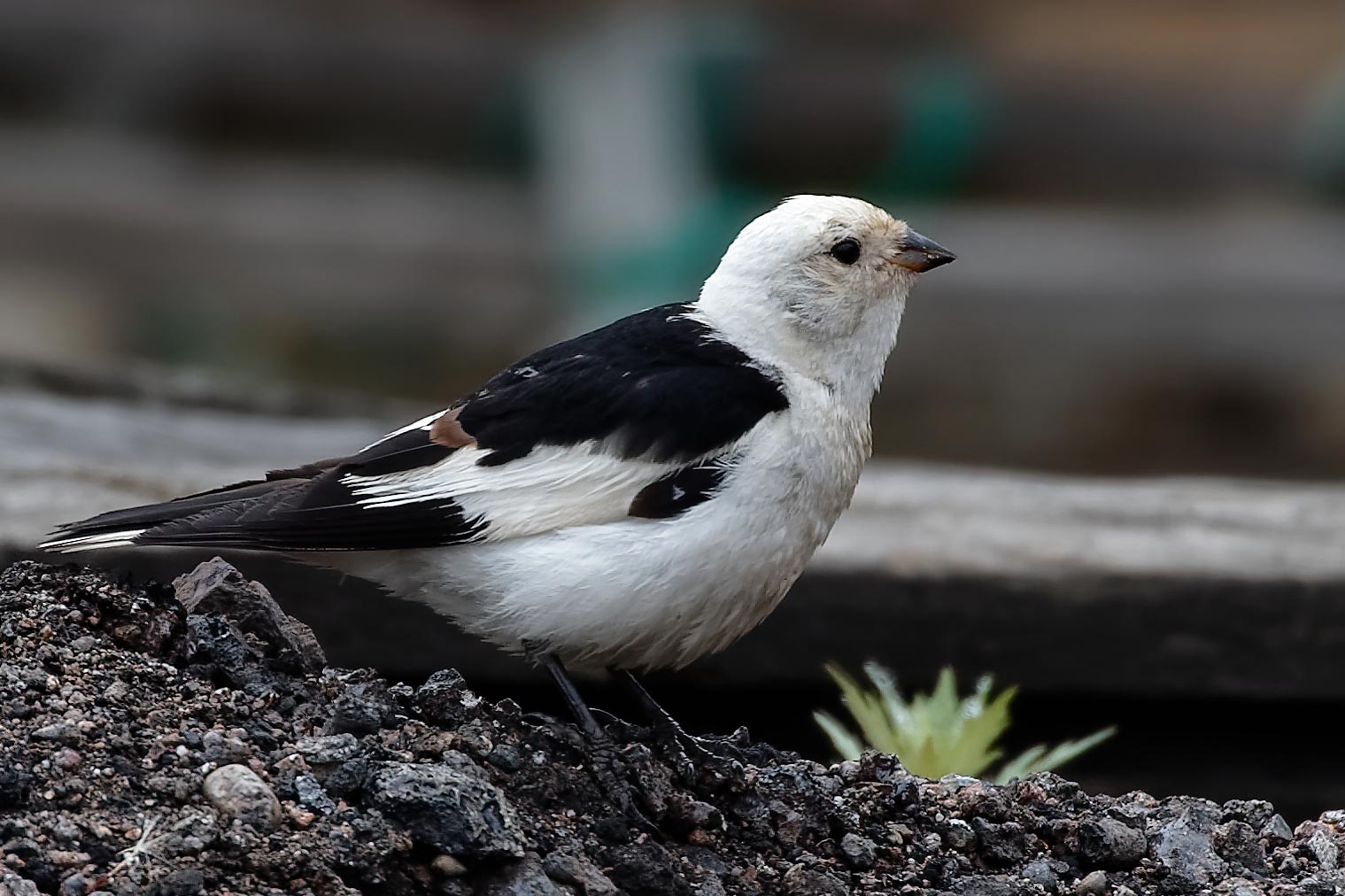 Snow Buntings are widespread and common in Chukotka, even in the very few settlements (Rod Standing).

It seems there are few barriers to expansion east and west for these Holarctic species. As the climate warms, will the Nearctic birds which have colonised this region continue to advance west? And what of Northern Wheatear, common on the Chukotka mainland? I have also watched them on Baffin Island, not so very far east in global terms. Already present in Alaska, might they 'join up' with their Greenland cousins somewhere in Canada? 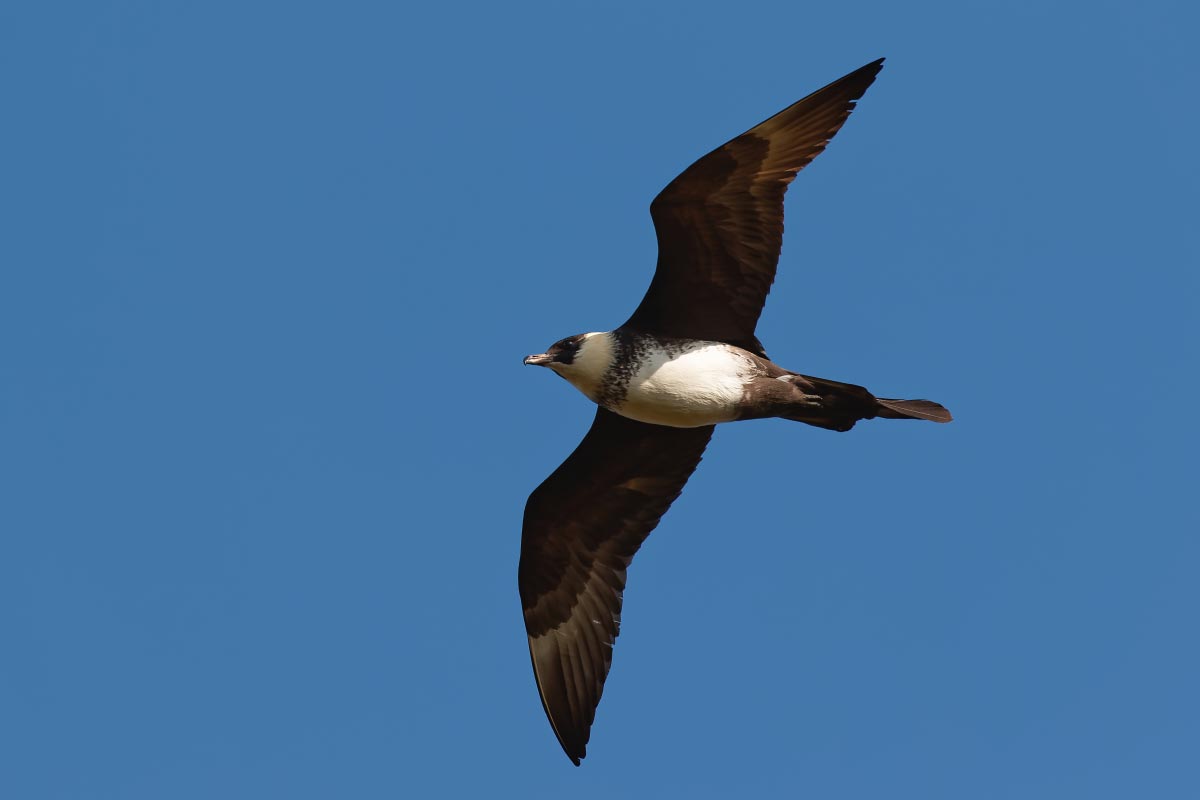 Pomarine Skua is the commonest skua species in the Russian Arctic (Rod Standing).

Back on Wrangel Island, just south of Dream Head is Cape Thomas, where the tundra is drier and inhabited by Lemmings. Again in stunning weather, we walk up a stream bed, widened by torrents during the spring melt (the permafrost beneath us ensures that watercourses cannot erode downwards). A Long-tailed Skua settles 15 m away and a grey feathery chick rushes to meet it, pecking at its beak and stimulating the parent to disgorge a meal.  The adult skuas here hunt Lemmings and we watch them hanging motionless in the wind like kestrels, scanning for their prey. As we walk on, a white dot on the hillside reveals itself to be a Snowy Owl, another Lemming predator. Through the scope we see it turning its head, keeping a wary eye. Ambling back to the zodiacs, we see and hear Grey and Pacific Golden Plovers perform display flights above us.

The Chukchi Sea hosts not only birds in the northern summer, but also whales, including Humpback, Bowhead and Grey. The shearwaters closely attend the whales and the pattering of their feet on the water surface as they reposition themselves (sounding like a round of applause) is an evocative counterpoint to the 'whoosh' of the whales' blows. We see up to 20 Humpbacks at a time, spouting and fluking wherever we look, but it is the Bowheads which impress most. This huge Arctic whale has the largest mouth of any animal and a head strong enough to smash through two feet of ice. As we stand on the prow of the stationary ship, a Bowhead surfaces directly beneath us, blows and moves slowly past, the white chin and mottled tail showing clearly through the still water. It is an unforgettable moment, and one of the few occasions when I regret that my zoom lens has a minimum focal length of 100 mm! 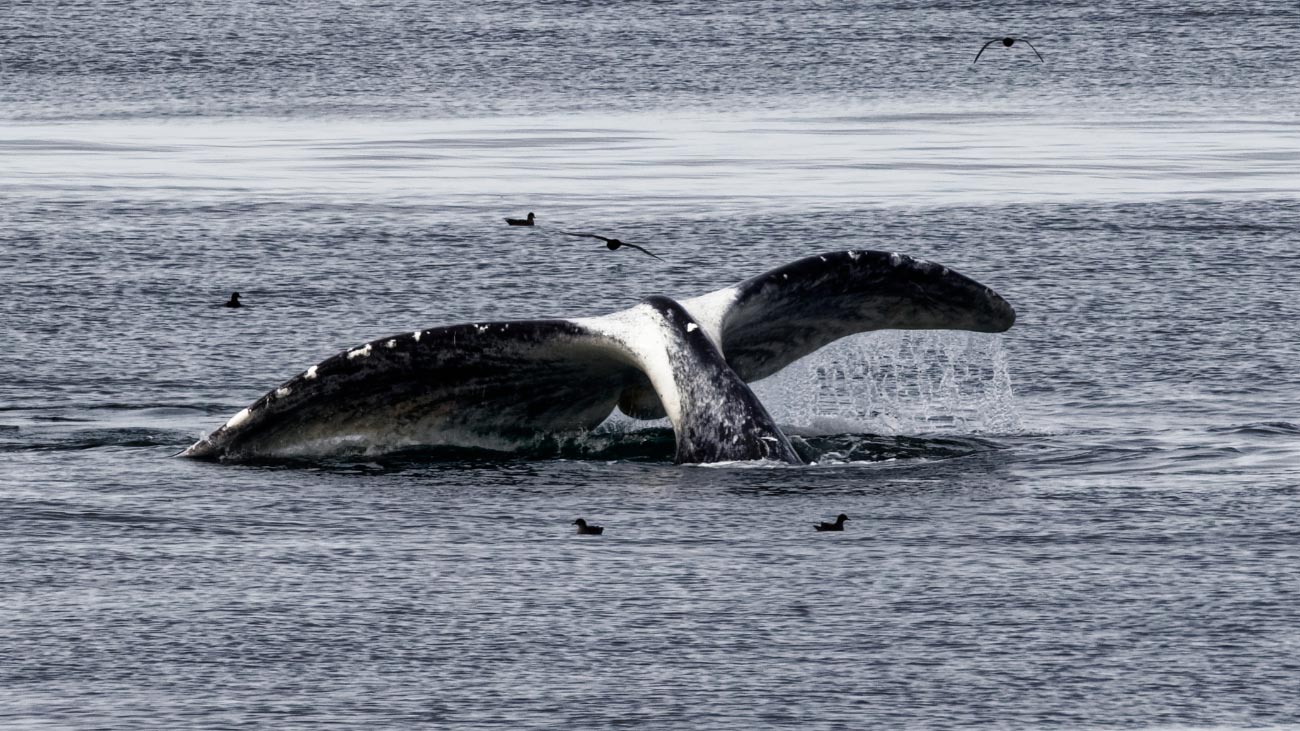 Bowhead Whale showing its flukes as it dives in the Chukchi Sea.They grow up to 20 metres long (Rod Standing).

The fjords and bays of the eastern Chukotka coast, facing east towards Alaska, have a slightly milder climate and a wider range of species. At Puutin Bay we cruise in the zodiacs beneath seabird cliffs alive with six or seven species of alcid, including many Pigeon Guillemots and Tufted and Horned Puffins. A pair of Peregrine Falcons, those most cosmopolitan birds, nests at the clifftop and circles overhead, scolding us for intruding. One of the Peregrines stoops at a Tufted Puffin flying past, which wriggles out of the Peregrine's grasp and flies away. 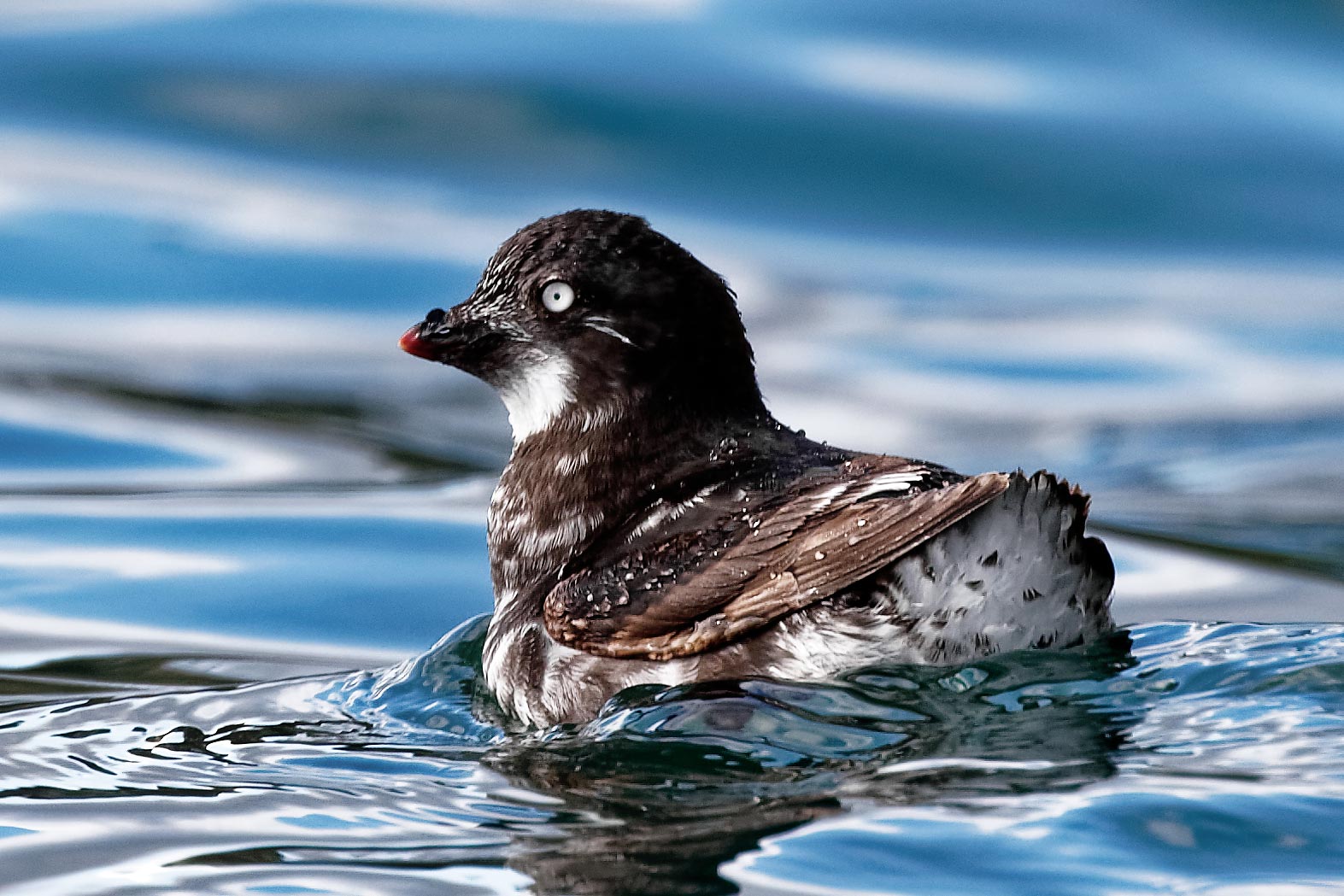 Least Auklets eat 86 per cent of their bodyweight in plankton each day (Rod Standing).

At the base of the cliff auklets bob and a gaggle of Harlequin Duck slips shyly along the waterline. We have time for a short landing at the entrance to the nearby lagoon, where a Red-necked Grebe dives. Here the Lemmings have been replaced by Ground Squrrels and, in the rockier parts, by Pikas so the predators are different too. There are no Long-tailed Skuas here but a pair of Rough-legged Buzzards also greets us with their mewing calls. 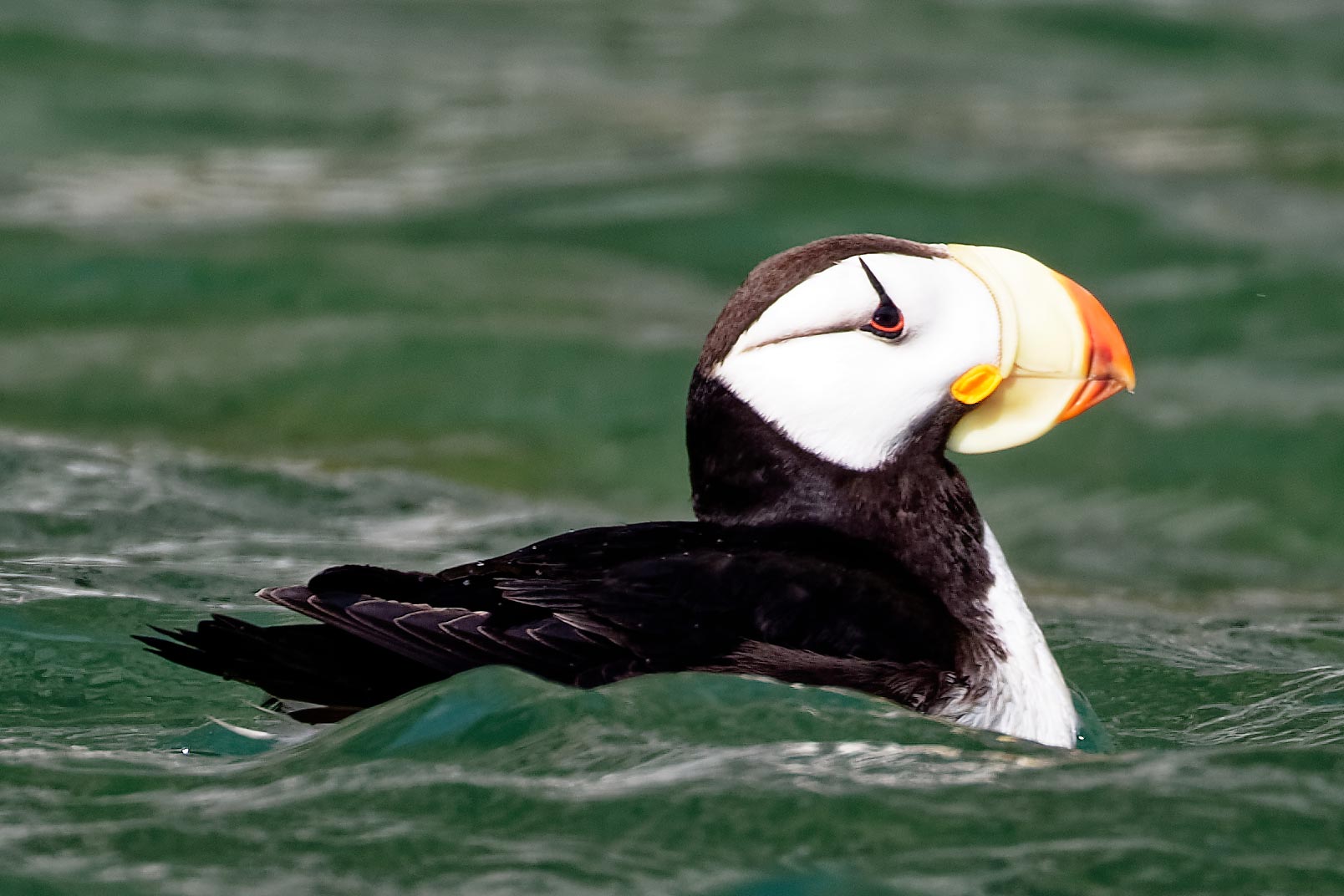 Horned Puffin is another stunning auk of the North Pacific (Rod Standing).

Further south, at 'Whalebone Alley' on Yttygran Island, we see the 600-year-old arrangement of Bowhead Whale jawbones and skulls almost submerged in lush vegetation. Debate still rages over their purpose, but they seem to be part of a ritual or sacred site. There are many Buff-bellied Pipits and Northern Wheatears here and a member of the group sees a White-billed Diver flying past. Then at a nearby landing where a stream enters the fjord, we find the first shrubs. Among them I find two Willow Ptarmigan, Bluethroats, Arctic Redpolls and family parties of Arctic Warblers giving their distinctive 'dzzt' calls. Along the streams there are Eastern Yellow Wagtails and Red-throated Pipits. Sandhill Cranes (another Nearctic species which has crossed the Bering Sea) announce their presence with loud bugling calls as they fly over. 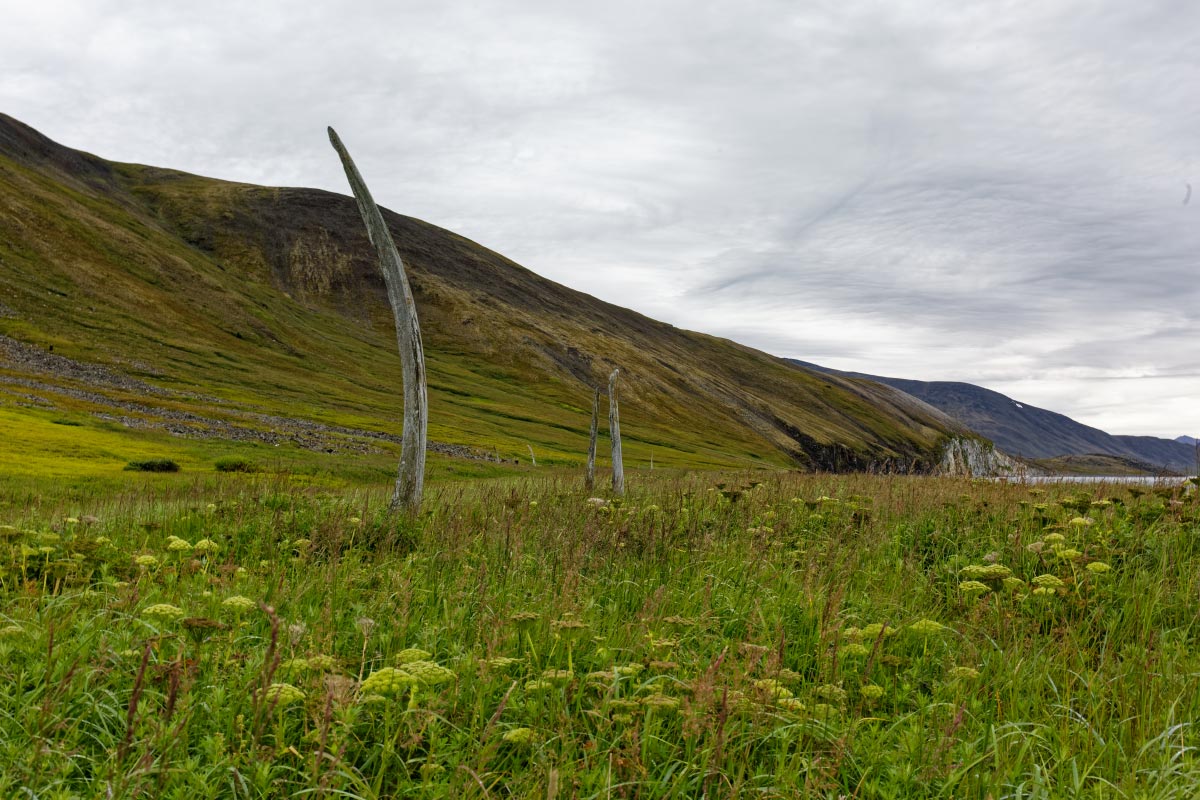 'Whalebone Alley' on Yttygran Island consists of the jawbones and skulls of Bowhead Whales (Rod Standing).

Our final zodiac landing is in light rain on a gravel beach in Penkigngey Fjord, where the land slopes up steeply above an apron of muddy pools. At the crest of the beach a Tufted Puffin is resting in the grass, the rain forming perfect clear droplets on the bird's feathers. 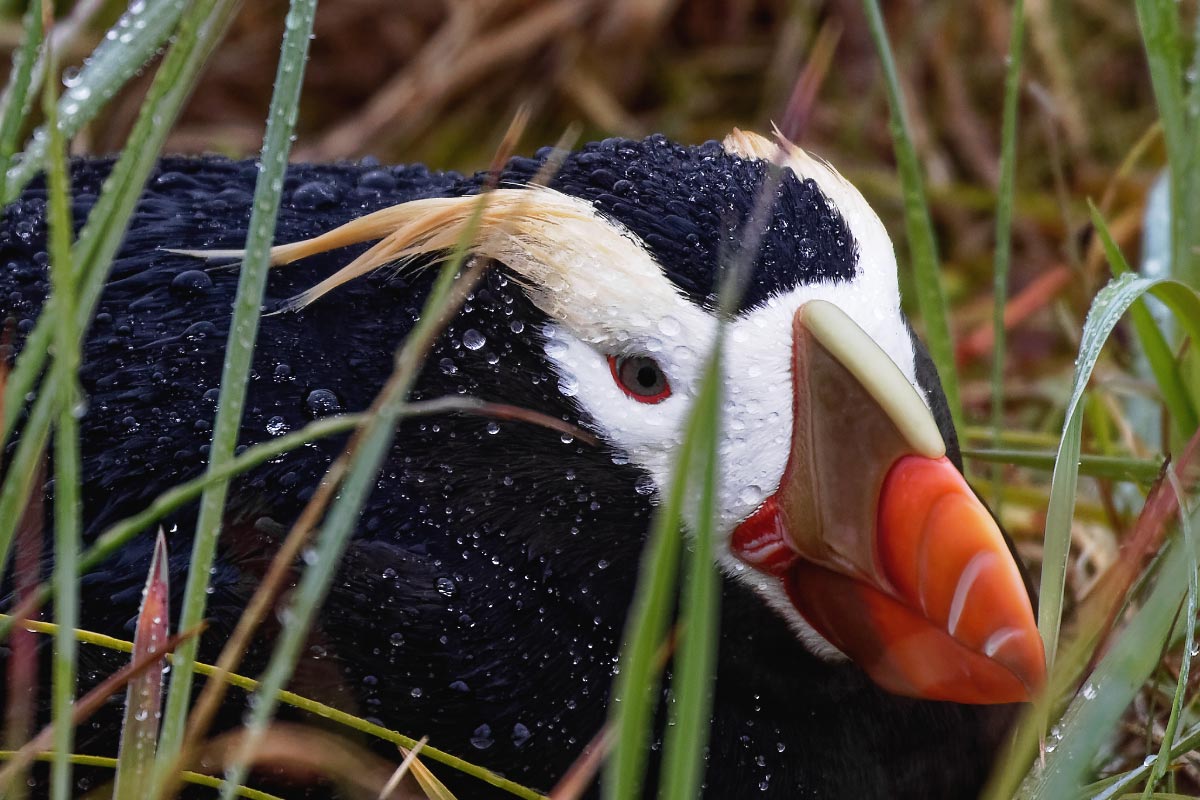 Tufted Puffin resting among grasses at the end of Penkingney Fjord – sadly the bird appeared to be in poor health (Rod Standing).

The bushes on the hillside above contain more Arctic Warblers, but the small flock of waders around the pools attract my attention. Three of them are Red-necked Phalaropes, which vie for the choicest pool just a few metres away from where I am standing. I may be the first human they have seen. When they are not pecking at each other, they patiently pick tiny insects off the emergent vegetation.

Turning around, I see that the other peeps are busily feeding a few metres the other side of me. Most are Red-necked Stints, but a few have rufous scapulars and longer, subtly downcurved bills: Western Sandpipers! Among the most numerous North American waders, they are amazingly rare in Europe, so it is a real treat to see them. 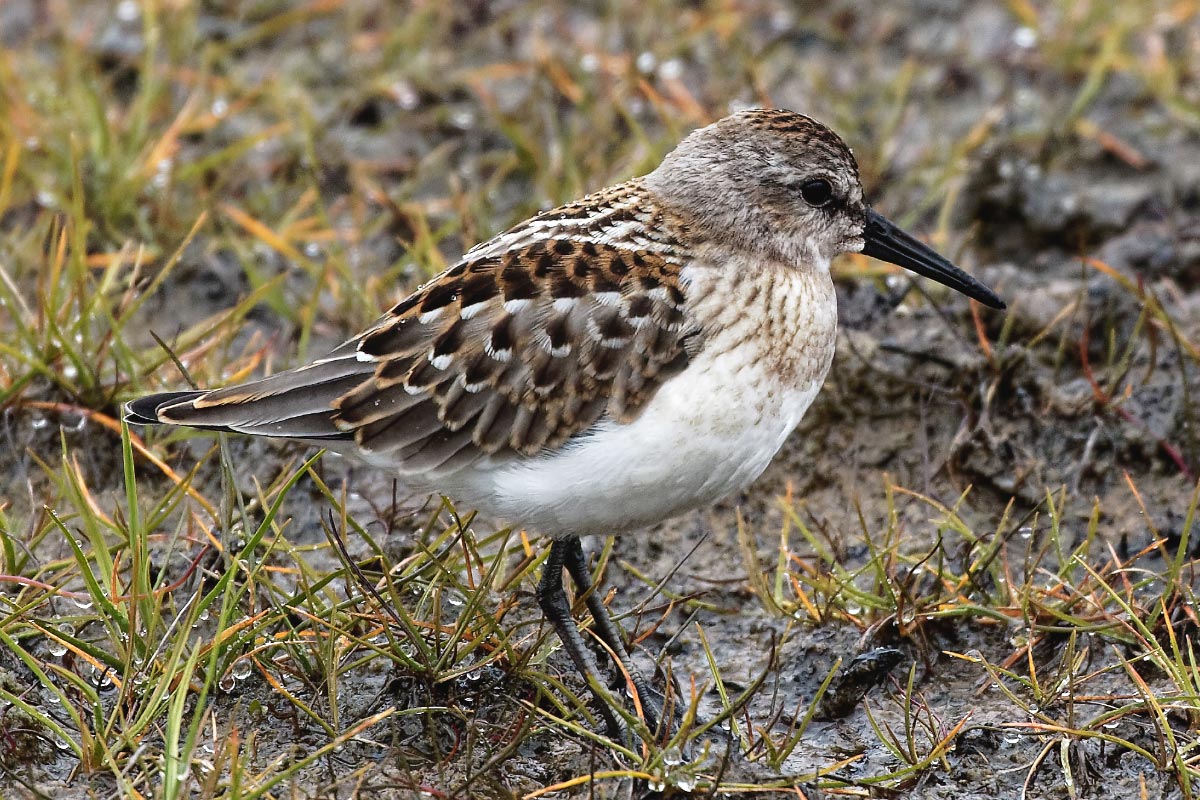 Juvenile Western Sandpiper on its way from Chukotka to its wintering grounds in western North or Central America (Rod Standing).

The voyage starts and ends at Anadyr, the capital of Chukotka. The compact city overlooks the Anadyr River, through which a vast river system 700 miles long drains into the Bering Sea. The murky estuary, here 3 miles across, is alive with salmon heading upstream to spawn. Countless Spotted Seals and Belugas surround the ship feeding on this bounty. The glistening white backs of the Belugas appear and disappear in quick succession, almost too fast to see. 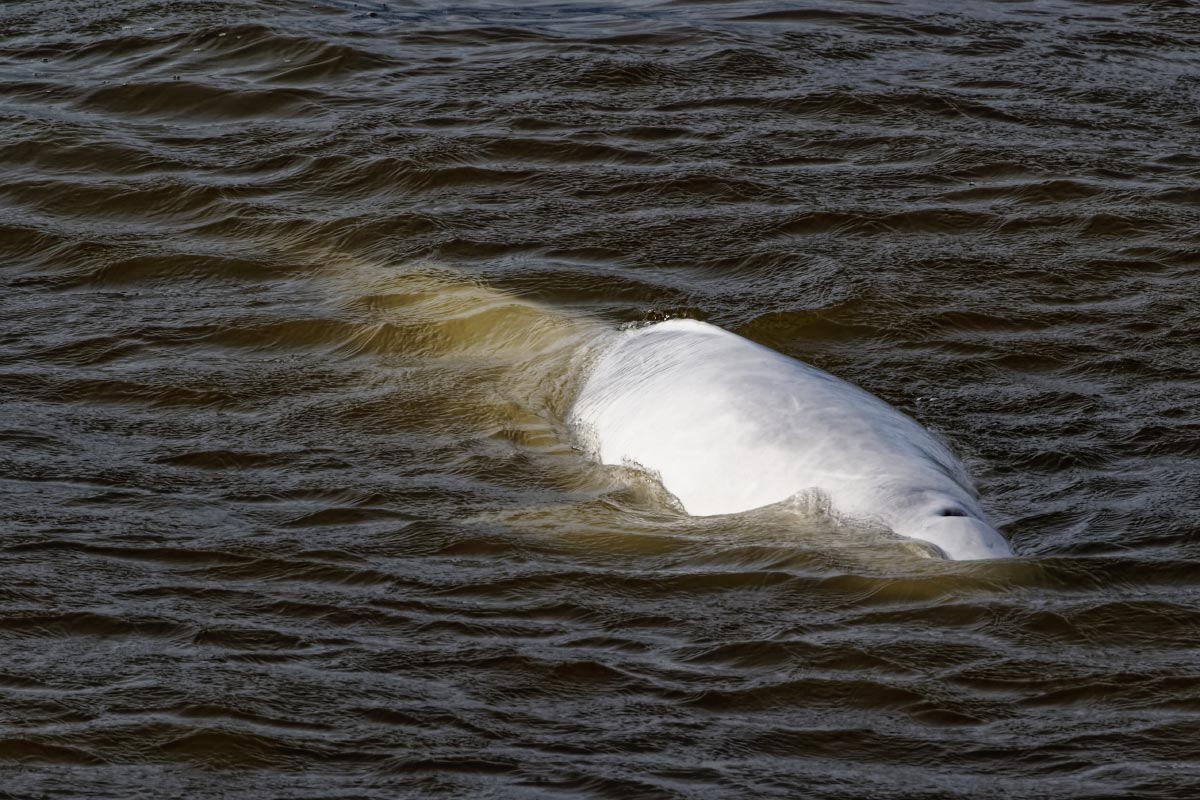 One of many Belugas feeding around the ship (Rod Standing).

As we wait for the landing craft to take us to shore, the final birds of the trip pass our ship, reminders of the last two weeks: a Sabine's Gull flies upriver, Long-tailed Skuas harass the Arctic Terns and patrolling Vega Gulls watch for scraps from the salmon hunt beneath the surface. It has been such a privilege to witness one of the natural world's great crossroads, where the Palearctic, Nearctic, Arctic and Pacific all meet. Who knows what the future holds for this immense yet fragile wilderness? 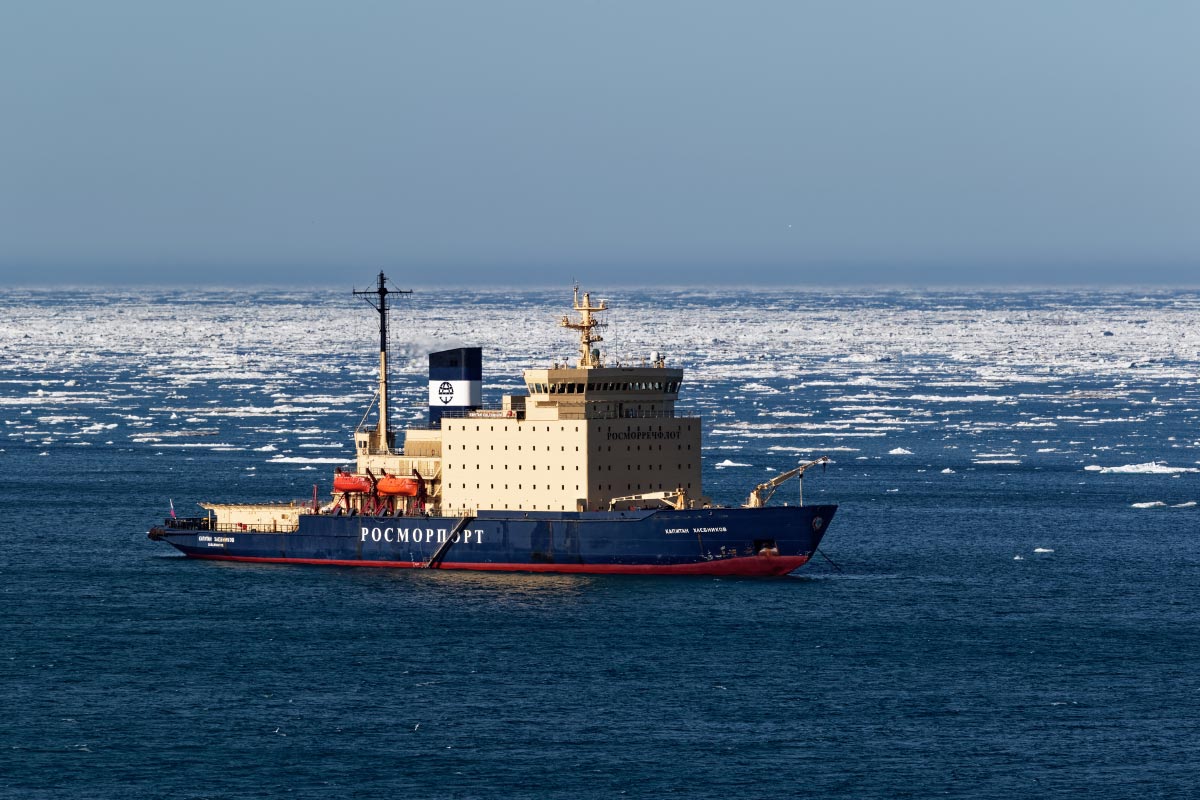