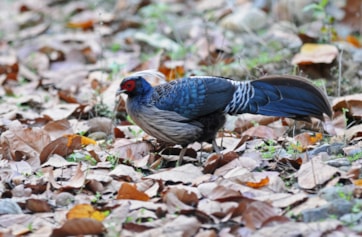 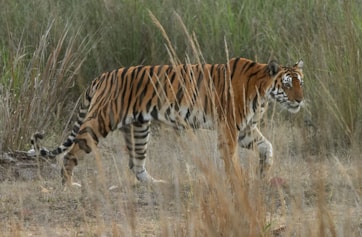 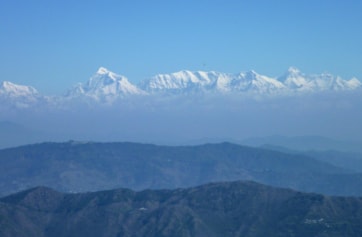 **NOTE: this tour can be combined with the North India tour.

The Himalayas are an ornithological treasure trove of amazing, beautiful and absolutely superb birds. For anyone who has never been, there are numerous new families of birds, as well as the impressive spectacle of large mixed-species flocks. Added to this is a whole suite of skulking, unobtrusive and hard-to-see species – and we really love those ones!

This tour concentrates on the 'classic' Himalayan destinations of Corbett NP and the higher elevations around Nainital, Pangot and Sat Tal; the focus of the tour will be to see all wildlife well, rather than racing around trying to build up a big list, but we will also concentrate on the specialities as well. We start at the world-famous Corbett NP, where we split our time between a good lodge outside the park and Dhikala Lodge nestled within the heart of the park. As well as a chance of seeing Tiger and wild Asian Elephants, there is a whole host of attractive species to search for, from Ibisbill, Pallas’s Fish-eagle, Great Pied Hornbill and Slaty-back Forktail to Wallcreeper, Kalij Pheasant, Collared Falconet and some true grassland skulkers such as Himalayan Rubythroat, Grey-sided Bush-warbler and Hodgson's Bushchat.

Moving to the tranquil setting of our secluded lodge at Pangot, this stunning and remote area will provide a veritable feast of typical Himalayan species such as barbets, bulbuls, babblers, laughingthrushes, yuhinas, warblers and rosefinches. There are numerous specialities to search for as well which will ensure you really won't want to leave. Rather unique by Asian standards, the lodge has a feeding station giving the opportunity to get up close and personal with some cracking birds and provide a veritable feast of photographic opportunities.

Finally, we conclude our Himalayan adventure at Sat Tal, where amid thick forest, there is the chance of tough species such as Nepal Wren-babbler, Rufous-chinned Laughingthrush and Chestnut-headed Tesia, among a great selection of other birds. Nearby areas could produce Speckled Piculet, Black-throated Accentor, Himalayan Red-flanked Bush-robin and Small-billed Scaly Thrush, among others. With the excitement of an overnight sleeper train returning us to the hustle and bustle of Delhi, we conclude the tour with a complete contrast of species by visiting Okhla Bird Sanctuary and its multitude of waterbirds and some special species to finish of our jam-packed trip in spectacular fashion.

This break can be joined to our Northern India highlights tour for a comprehensive coverage of northern India.

On arrival you will be transferred to a nearby hotel where you will meet up with the rest of the group at dinner and can discuss the exciting adventure that awaits.

An early departure will see us driving across the Gangetic plain and up into the shadow of the mighty Himalayas to a good lodge situated at the edge of the famous Corbett NP. Our final destination today is Tiger Camp Lodge, which is situated on the periphery of the park, where the thick jungle that borders the camp and the close proximity of the Ramganga River makes this an ideal base for birding. This is a particularly pleasant site to while away a few hours and bird the grounds and surrounding area, and we can find Red Junglefowl, River Lapwing, Pin-tailed Green-pigeon, Alexandrine Parakeet, Lineated Barbet, Common Tailorbird, Oriental Magpie-robin, Jungle and Large Grey Babblers, Orange-gorgeted Flycatcher, Yellow-bellied and White-throated Fantails, Pied Flycatcher-shrike, Himalayan and Black-crested Bulbuls and White-bellied Drongo. Our guides may well have a Tawny or Brown Fish-owl staked out at a daytime roost as well, while rarer species that are possible include Rufous-bellied Eagle and Chestnut-headed Tesia.

After an early breakfast we set out on the exciting jeep drive to the Dhangarhi entrance to Corbett NP. This famous reserve was set up for Project Tiger in 1935. It covers 200 square miles and protects a large tract of forest and grassland at the base of the Himalayas. Due to the presence of Tiger, exploration within this magnificent park on foot is not an option, and is only allowed in areas adjacent to the compound at Dhikala or if accompanied by an armed guard.

Located between 400 m and 1,100 m, the reserve offers a variety of habitats, from dense jungle and mature forests to open grassland, broad river valleys and rolling hills. During the winter months the park's already impressive bird list is enhanced by large numbers of birds moving down from areas higher up in the Himalayas, and this contributes in giving the park one of the richest avifaunas in northern India at this time of year.

Our jeep safari through the stately dense Sal jungle may well last for most of the morning as we stop to watch numerous birds or listen intently to the sounds of the jungle coming to life. With much luck we could hear the alarm calls of Chital or Common Langurs indicating the presence of a predator, but we would need a great deal of luck to see a Tiger or Leopard here. Our route takes us through impressive forest and grasslands, and across several dry river courses which will give us a small insight into the spectacular and varied amount of wildlife present in this famous park.

After lunch at Dhikala we will take a jeep drive into the tall grassland, where species such as Chestnut-capped and Yellow-eyed Babblers, Bright-headed Cisticola, Plain Prinia, Grey-sided Bush-warbler, Plain Prinia and White-tailed and Siberian Rubythroats may be found, and where in the last few years White-throated (or Hodgson's) Bushchat has been seen regularly.

The jungle surrounding the camp is alive with birds in the early morning. A short walk along the nearby trails and scanning the river can reveal many exciting finds such as Black Stork, Pallas's Fish-eagle, Great Thick-knee, Himalayan Rubythroat and Smoky Warbler, with the evocative sounds of Indian Peafowl ringing out across the forest. But our main priority this morning is another jeep safari through the grasslands and dense forests and no doubt we'll come across a wide range of mammals such as Wild Boar, Golden Jackal, herds of Spotted Deer, Hog Deer, Sambar, Indian Muntjac, Smooth-coated Otter, Grey Langur and Rhesus Macaque. Herds of wild Asian Elephants inhabit the reserve and can sometimes be observed browsing at the forest edge, the strange fish-eating Gharial can also be found and there is always a chance of viewing the most impressive mammal on the planet, Tiger.

After this early morning jeep safari, we return for breakfast and then spend the rest of the morning on a watchtower overlooking a water-hole. In the afternoon we head out of the park stopping en-route for birding. We may encounter a noisy gang of huge Great Slaty Woodpeckers or an even bigger Great Pied Hornbill calling raucously from the top of a tree, a skulking Puff-throated Babbler or Long-billed Thrush, or even a musical White-rumped Shama perched in the shadows.

The wonderfully located Jungle Lore Birding Lodge is one of the finest birding lodges in India. There is a feeding station below the veranda where a huge flock of White-throated Laughingthrushes come into feed, and are joined by Streaked, Striated and Red-headed Laughingthrushes, as well as the range-restricted Black-headed Jay. The gardens are frequented by the beautiful Pink-browed Rosefinch, as well as Himalayan Greenfinches and Rock Buntings. Slaty-headed Parakeets fly in tight formations across the valley below, while a Lammergeier sometimes soars right overhead.

Well over 250 species have been recorded in the immediate vicinity and during the course of our stay we will visit all the best birding sites such as Cheena Peak, Kilbury and Timla Pani, Pangot village, Baggar and Gughu Khan. This is a remote wilderness 10 miles from Nainital and is home to a varied selection of typical Himalayan birds, so our first morning walk could be very interesting with many regular species present such as Red-breasted Parakeet, Fulvous-breasted Woodpecker, Blue-throated Barbet, Maroon Oriole, Green-backed Tit, Himalayan Bulbul, Grey-backed Shrike, Dark-throated Thrush, Chestnut-bellied Nuthatch, Scarlet Minivet, Striated and Grey-breasted Prinias, Oriental White-eye, Lemon-rumped and Grey-hooded Warblers, Red-billed Blue Magpie and Grey Treepie.

We will drive higher up the mountain in search of such star birds as Koklass and Cheer Pheasants, Fire-fronted Serin, Spot-winged Tit, Mrs Gould's Sunbird, Upland Pipit and Rufous-breasted and Altai Accentors. A secluded trail takes us up through Oak and Rhododendron forests towards Cheena Peak, which offers views of the snow-clad Himalayan peaks including Nanda Devi, India's second-highest mountain. The viewpoint here is usually alive with birds such as Grey-headed Canary Flycatcher, White-throated Laughingthrush and Grey-winged Blackbird.

After breakfast we set out on the two-hour drive to Sat Tal on one of the world's more spectacular mountain roads as we descend from the Kumaon Hills, passing through the forested area of the Cheena Peak Range via Snow View Point and Kilbury. Along the way is a fast-flowing mountain stream where Brown Dipper and Slaty-backed and Little Forktails reside; the surrounding forest has Rufous-bellied Woodpecker, Speckled Piculet, Rufous-bellied Niltava and other typical Himalayan birds.

Most of the morning will be spent birding around Sat Tal, making a special effort to try to see some of the more shy and skulking species such as Himalayan and Siberian Rubythroats, Chestnut-headed Tesia, Rufous-chinned Laughingthrush, Himalayan Aberrant and Grey-sided Bush-Warblers and Black-throated and Rufous-breasted Accentors. There will also be plenty of time to enjoy better views of some of the birds seen the previous day. After lunch we drive back to Delhi.

After an early breakfast we head across the city to Okhla Bird Sanctuary. This is a remarkable place where birds are numerous and easy to see and there will be quite a few species we won't have encountered in the foothills of the Himalayas. In particular we will search for White-tailed Stonechat, Striated Grassbird and Yellow-bellied Prinia. Most of our attention will be drawn to the open water, where huge flocks of familiar wildfowl also host the more exotic Indian Spot-billed Duck and possibly Comb Duck. A flock of Greater Flamingos is usually present here, along with Garganey, Bar-headed and Greylag Geese, while flocks of Brown-headed Gulls and smaller numbers of Steppe Gulls are very conspicuous.

Along the water's edge and in the marshes we might find Purple Heron, Glossy and Black-headed Ibis, Indian Peafowl, White-tailed Lapwing, Common Babbler, Pied Bushchat Graceful Prinia, Red Avadavat and Indian Silverbill. Sometimes in the drier areas there is Red-naped Ibis, as well as Grey Francolin, Spotted Owlet, Yellow-footed Green-pigeon, Red Collared-dove, Purple Sunbird, Hume's Warbler and Siberian Chiffchaff, while overhead there will be numerous Black and Black-eared Kites.

Morning transfer to the airport and return flights home.

This tour is operated for Birdwatch and BirdGuides by Zoothera Birding (Protected Trust Services Member No 5396). The price includes accommodation, meals, bottled water, ground transport, park/reserve entrance fees and services of leaders. Not included are international airfares, insurance, visa fees, drinks, tips, camera fees at National Parks and items of a personal nature. For more information or to make a reservation, go to www.zootherabirding.com/india-classic-himalayas-tour-intro.html.