A new study, published in The Condor: Ornithological Advances, has revealed how the translocation of Critically Endangered Ridgway's Hawks is proving a success in the species' conservation, with the number of breeding pairs now increasing.

Species translocation – the process of capturing animals in one place and releasing them in another – is a widely used conservation method for establishing or re-establishing populations of threatened species. These projects often have mixed results and can fail when the translocated animals don't thrive in their new ‘home’. However, careful post-release monitoring of translocated Ridgway’s Hawks on the Caribbean island of Hispaniola shows how the method can prove successful.

Since 2009, the Peregrine Fund has relocated 104 Ridgway’s Hawk nestlings from the species’ stronghold in the Los Haitises National Park, Dominican Republic, to the protected resort area of Punta Cana, 80 miles away. 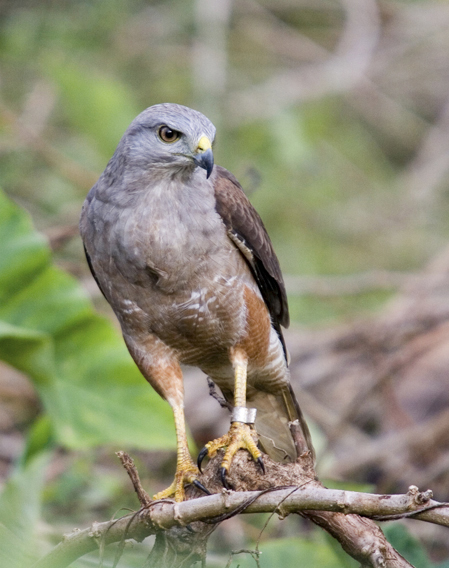 Researchers monitored the birds after their release, tracking their survival and breeding success, as well as collecting the same data on 36-110 breeding pairs per year in the original national park population. Survival rates were high in both locations, and more young hawks began breeding on Punta Cana, probably because more territories were available due to the birds’ low numbers.

Lead author Chris McClure of the Peregrine Fund and his colleagues believe that the “soft release” method they used with the translocated birds, involving an adjustment period where young birds are allowed to come and go freely but are provided with food, has contributed to the success of the project. Post-release monitoring has been a valuable tool for gauging the project's success and planning future conservation efforts, and the researchers hope that more wildlife managers will consider incorporating this into their plans when seeking funding for translocation projects. “Our results show that the new population of Ridgway’s Hawks in Punta Cana is taking hold, but we only know that because of the hard work of our staff and volunteers in tracking these birds,” commented McClure. “I think our study is a great example of monitoring to ensure that conservation goals are actually achieved.”

Massey University’s Doug Armstrong, an expert on reintroduction programmes, added: “The paper is a good example of the important role of post-release monitoring in translocation projects. It is easy for people to invest a lot of effort into well-meaning but ineffectual translocations projects if they aren’t monitored. This paper illustrates how state-of-the-art methods can be applied to provide clear and useful information of post-release survival and recruitment.”