The tools ornithologists use to track the journeys of migrating birds provide invaluable insights that can help halt the declines of vulnerable species. However, a new study from The Condor: Ornithological Applications shows that these data come at a cost — in some cases, these tracking devices reduce the chances that the birds carrying them will ever make it back to their breeding grounds.

Geolocators are small devices attached to birds that record light levels over time, which can be used to determine location. They are widely used to study migration patterns, but studies have suggested that some species may be negatively affected by carrying them. Douglas Raybuck of Arkansas State University and his colleagues monitored male Cerulean Warblers with and without geolocators to see how they fared, and they found that while geolocators had no effect on the birds' nesting success in the same season following their capture, birds with geolocators were less likely to reappear on their territories after migration the next year — just 16 per cent of geolocator-tagged birds returned from migration, compared to 35 per cent of the birds in the control group.

The data gained from geolocator studies are enormously useful for bird conservation, and on a global scale those benefits are likely to outweigh the potential costs. The results from this study suggest that the potential impacts of individual research projects need to be carefully evaluated, but we should remember that only a small number of birds are ever tagged relative to the total size of the population under study.

The researchers captured Cerulean Warblers in Pennsylvania, Missouri and Arkansas by luring them into nets using call recordings and wooden decoys. Outfitting some with geolocators but others with only identifying color bands, they monitored the birds' nests and then searched for them the following year to determine whether they'd returned. 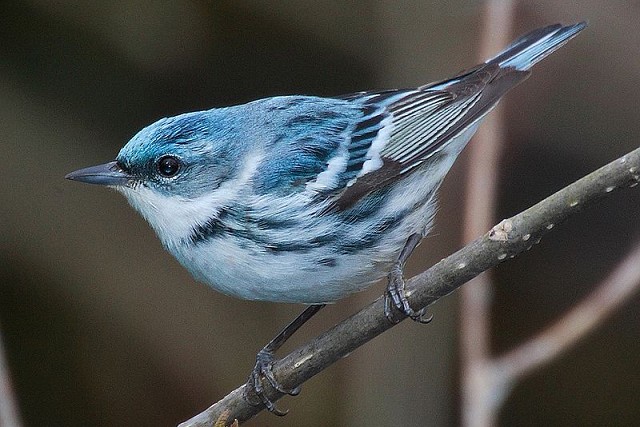 Mr Raybuck commented: "Re-sighting males and identifying their unique color-band combinations as they moved about in the canopy was not always easy, but our dedicated and skilled field crew did a fantastic job of overcoming these obstacles, which were compounded by inclement weather and the rugged topography of the sites.

"New technologies such as geolocators and automated radiotracking arrays have led to a surge in new tagging studies of migratory songbirds," according to York University's Bridget Stutchbury, an expert on geolocators and the conservation biology of North America's migratory songbirds. "Finding that tagged birds were far less likely to return the next year compared with un-tagged birds puts researchers in a serious dilemma, because despite the potential costs of tagging small birds, long-distance tracking is essential to find out which wintering and migratory stopover sites should be highest priority for conservation."