To relocate a mockingbird – in Northumberland

Having moved to Newbiggin about a year ago, Michelle Peterson was keen to follow in her family's footsteps and feed the wildlife she could attract to her small garden. "My mam has been feeding birds for years. She has three large gulls that arrive every day and she feeds them hot dogs out of a tin," Michelle laughs as she talks to BirdGuides' Alan Tilmouth.

"When I was young I spent lots of time outdoors and my uncle would point out birds and wildflowers and take me fly-fishing, so I learnt to appreciate nature," Michelle continues, "so I want the same for my daughter Esmerelda."

As well as a bird table and two fat ball feeders, Michelle receives frequent visits from local hedgehogs, so watching for birds and wildlife is always a part of their morning routine.

Wednesday 5 May was no different: up at 7.30 am, Michelle took 15-month-old Esmerelda to the patio windows, barely 10 paces from the feeders in the corner of the garden, and Esmerelda squealed her recently learned "There it is!" while pointing at a grey bird tucking into the fat balls at the end of the garden. 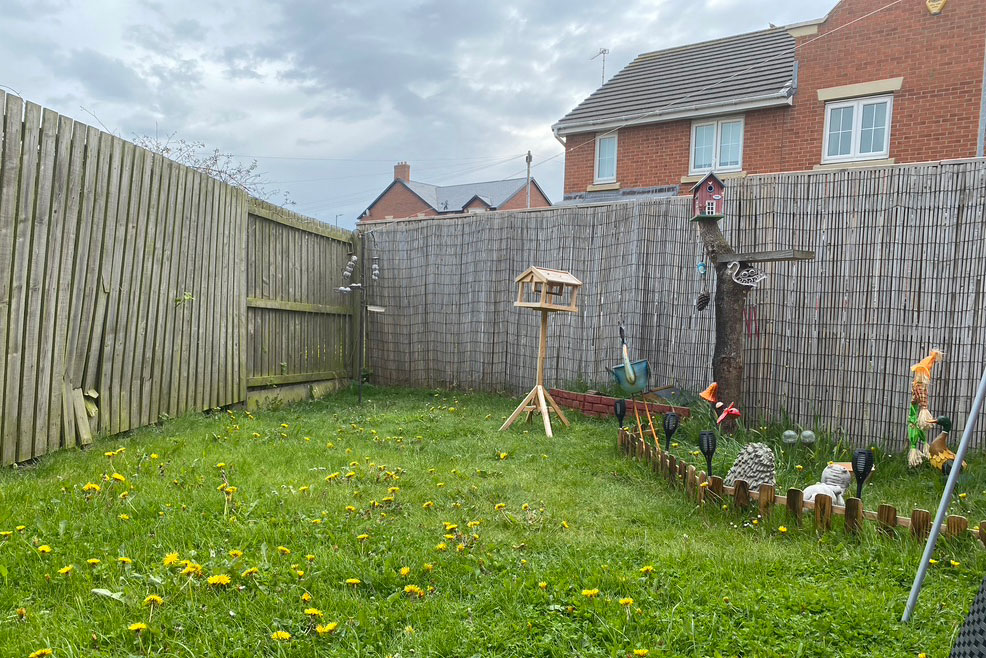 Michelle immediately knew this was a bird she wasn't familiar with, not being one of the usual Jackdaws, House Sparrows or Starlings that regularly frequent the garden, so grabbed a quick picture on her phone to show her partner John later that day.

As she went about her day occasionally glancing out the window and having a cuppa on the patio, the unusual grey bird continued to spend long periods feeding in the garden, seemingly not the least bit bothered by her presence. This was repeated the following day and Michelle was able to capture a couple of short videos, which she posted into her favourite 'British Birds' Facebook group in the hope someone might recognise her new visitor.

Michelle was lucky that one of the admin of the British Birds group, Paul Freestone from Cornwall, immediately recognised the Mockingbird and contacted the BirdGuides news team to alert them to the news.

After an excited exchange of messages Michelle shared her address with me, and invited Alan, who lives locally, to view the garden and hopefully the now-identified Northern Mockingbird the following morning. 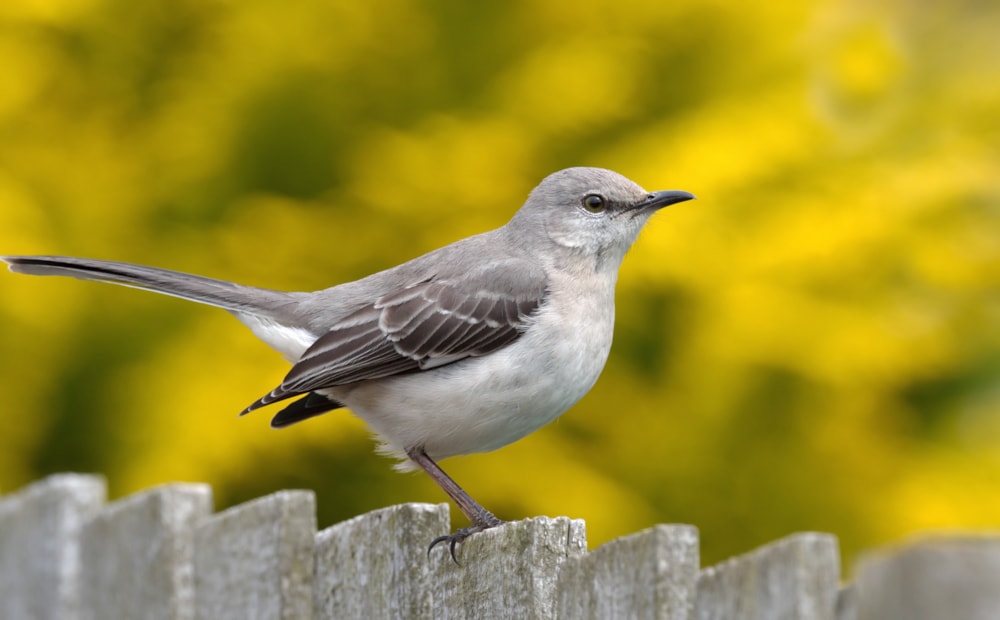 The Northern Mockingbird went on to give great views until Sunday evening, but had gone by Monday morning (Carolyn Farry).

Alan Tilmouth takes up the story: "I arrived early into Newbiggin on Friday morning knowing the magnitude of the sighting and wanting to ensure that, if possible, the bird could be seen by the hundreds that would want to visit.

"Michelle was nervous but really enthusiastic and helpful tracking down a friend that knew the owner of the large storage yard directly behind her garden.

"Newbiggin landowner Dave Loud arrived on the scene shortly after and once the situation was explained granted access to the yard and was keen to help. At that point, with nearby parking and directions organized, news was released and birders began to arrive almost immediately." 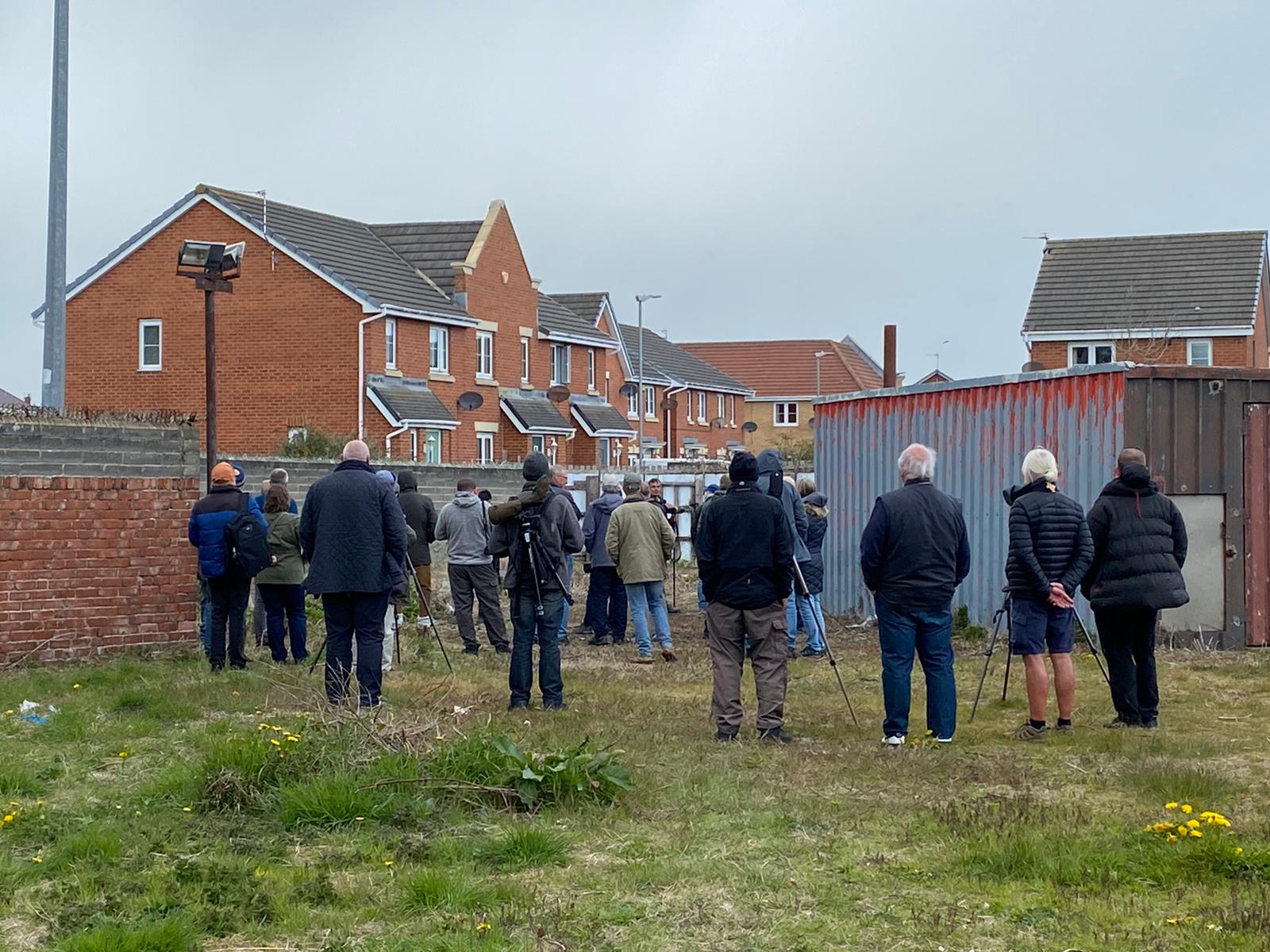 The twitch gathers on Dave Loud's land on Friday 7 May. A collection bucket raised £770 for local causes (Alan Tilmouth).

The Mockingbird performed exceptionally well over the following three days, keeping to a small area of gardens and feeding on insects, Mahonia berries and Michelle's homemade suet balls, which were restocked regularly. Michelle, partner John and Esmerelda all had prime seats as several hundred birders arrived and departed.

A number of plumage features, notably including the obvious damage to the greater coverts on the left wing, quickly identified it as the same individual originally seen in Exmouth, Devon, from late January to 7 April, and then at Pulborough, West Sussex, on 8 April. How many east coast migration hot-spots had it flown over, or even stopped off at, in the intervening four weeks? 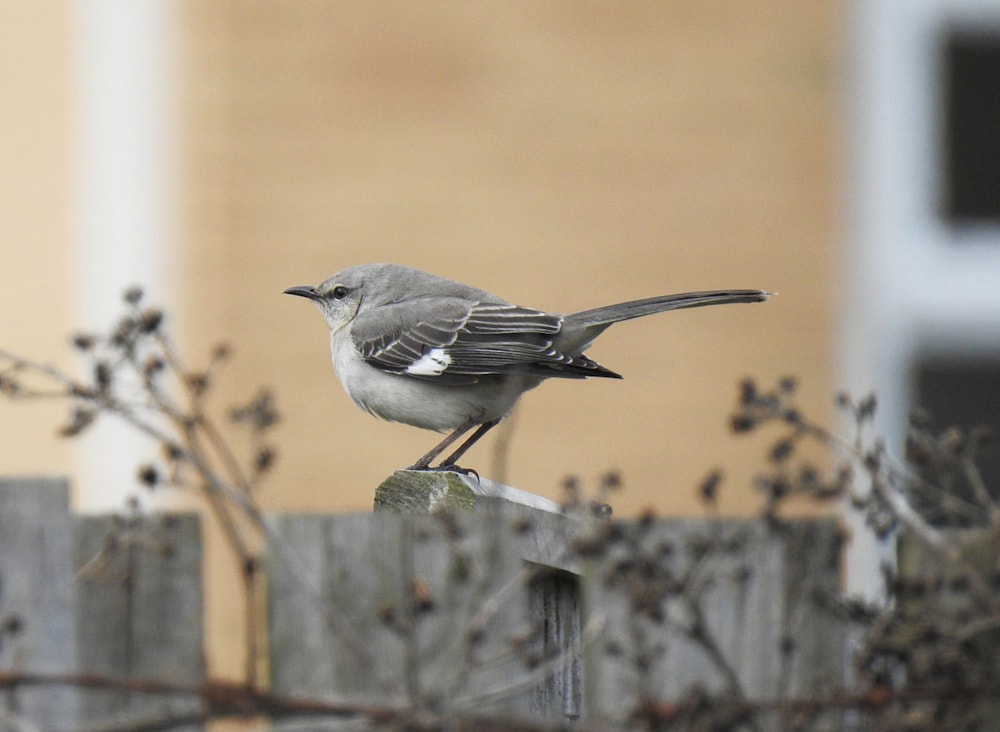 A characteristic break in the greater coverts on the bird's left side quickly identified it as the same bird previously seen in Devon and West Sussex (Gary Smith).

Reflecting after the weekend, Michelle said she was "overwhelmed and excited by the whole experience" and "happy so many people got to see the bird Esmerelda had found". Esmerelda is currently studying the BBRC submission form and will be submitting her record once the ketchup stains have dried.

Donations by visiting birders totalled £770, with this set to go to good causes in the Newbiggin area. 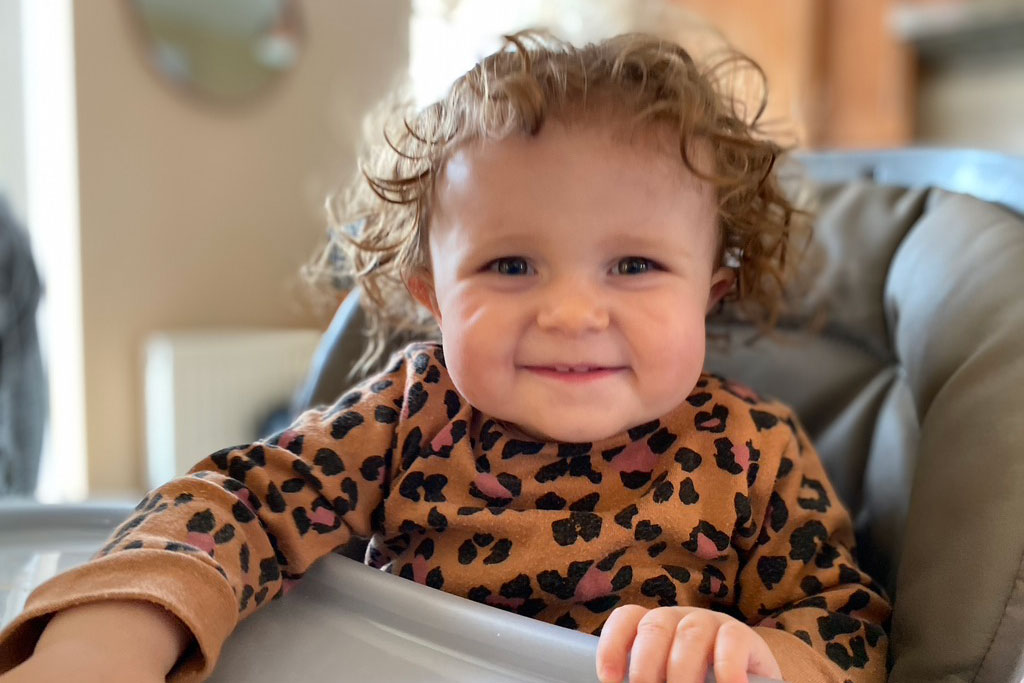