Variation amongst individuals of the same species of animal or plant is usually confined to just differences in sex and age. For example an adult male Blackbird will look pretty much identical to another adult male Blackbird. But every now and then, nature throws in an oddity it shouldn't. In early March a completely white bird appeared in my back garden. Now I'm not talking about a pale sort of colour, like a Collared Dove, I'm talking 'Daz' white. I'm talking as white as a Hollywood star's teeth white. At first only fleeting glimpses were had but eventually it became clear what this bird was: a Blackbird. 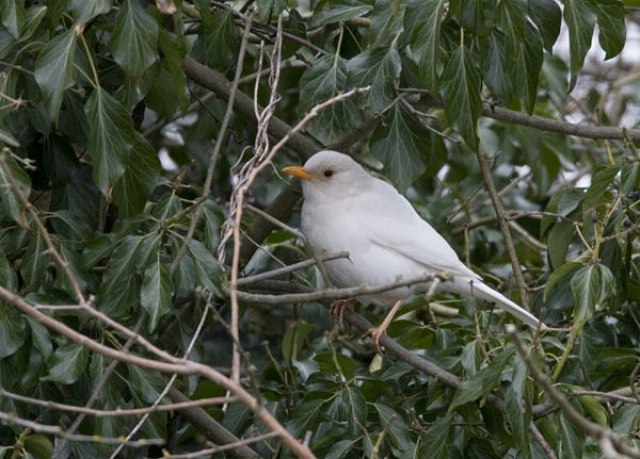 It looked Blackbird-shaped, acted like a Blackbird and even called just like a Blackbird...but it was white. It even had the yellow bill and eye-ring confirming it was an adult male, but for this individual the black pigments in the feathers were completely absent; leucistic, you could say. Now I have seen Blackbirds with odd specks of white in their plumage before, some even with nearly completely white heads, but a completely white one was new to me. Naturally I grabbed the camera but photos proved rather hard to obtain. 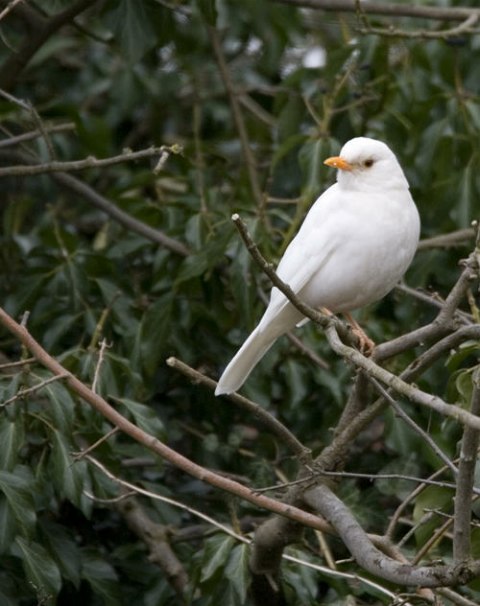 A couple of males had a scrap over our back garden and, given all the food we supply, who can really blame them; but they completely ignored the other male present — the white one. It's almost as if they don't quite realise it is the same species as them!

So if the locals aren't upsetting it, what is making it so camera-shy? Well I can only guess that this dude actually knows it is white and therefore shines out like a beacon for passing predators. The reason I thought other birds were picking on it at first was because every time they flew up it would fly off, but now it seems clear it is just fleeing 'just in case', as it feeds alongside other birds happily. This bird's instinct has reacted to its own genetic curve-ball by making it more cautious about hanging out in the open and hanging around when those around it are flying off. Undoubtedly without this instinct it wouldn't have lived to reach adulthood as any passing Sparrowhawk would have seen it from outer space, let alone from half a mile up! 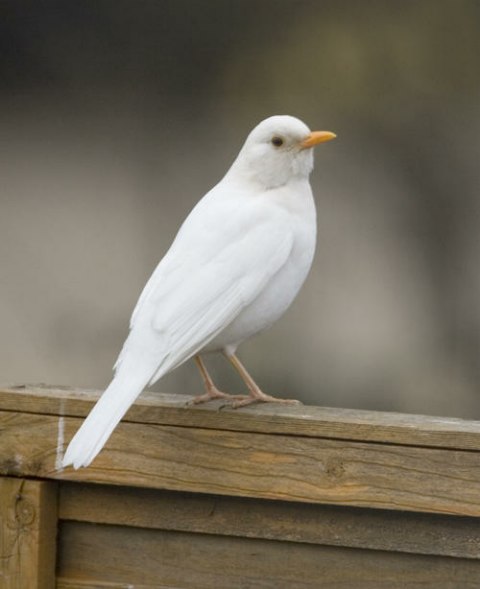 So what will happen now with our white Blackbird? Will it stay? I don't know; it's encouraging that it has turned up in early spring. Who knows it might even breed — would be interesting to see the outcome of that. All I know is that nature does produce oddities and these make it worth looking out the kitchen window once and a while.

BirdGuides has a gallery of aberrant birds - you can see more peculiar Blackbirds and other species here.
Written by: William Bowell