The Scops Owl at Thrupp

Six weeks ago two Scops Owls turned up in the Northern Isles, but Oxon birders settled down to a normal spring's birding with no particular highlights in May to enliven the local birding scene. Little did we realise that in our midst was a third Scops Owl simply waiting to be found. That all changed on Tuesday 13th June when the news about the Scops Owl broke. The local birders all hurried to Thrupp and as dusk arrived an expectant crowd of around 40 birders waited to catch a glimpse of the owl that had been calling regularly since early evening. Other birders from further afield gradually arrived and most people had brief flight views of the bird or views of it perched in a walnut tree illuminated in the beam of one of the few torches available that night.

Tuesday proved to be the precursor to a major influx of birders with about 400 people present on Wednesday evening and up to 150 present each evening until today. There have even been a few optimistic birders present throughout the day and the lucky few have been rewarded with occasional calls and brief views of the bird roosting. For much of last week the bird seemed to respond to train horns from the nearby railway but this response seems to have diminished over the last few days and the bird is now even harder to locate during the day than it was when first found. Its night-time habits also seem to be changing, with it covering a much wider area than it seemed to occupy originally, although it still seems to visit its favourite trees near the canal bridge regularly.

Discussions with local fishermen have established that the bird had been calling for about 5 weeks prior to the 13th June and that they, and the local residents, had spent much of the last few weeks wondering what the strange persistent noise was that was disturbing this quiet corner of Oxfordshire. One enterprising local had decided to call the RSPB to report this strange persistent call that they described as sounding a little like a car alarm. The RSPB contacted the county recorder and he met up with a local councillor on Monday evening to hear the bird and then to try to allay any fears about an invasion of birders whilst trying to ensure that the locals understood the importance of the bird and the interest it would generate. The locals were initially against any news going out but, after some persuasion and agreements about trying to minimise the impact on the village, the news was released late on Tuesday.

Whilst this is the third Scops Owl this spring it is the first mainland bird that has stayed long enough for many people to see since the one at Porthgwarra (Cornwall) for two days in March 2002. It is the first bird singing regularly on territory since the well-watched bird at Dummer (Hampshire) in 1980 and has probably been the highlight of many birders' spring in the UK. Remarkably it is not the first Scops Owl claimed in Oxfordshire, but the record of a bird found dead inside a rotten turnip at Kingston Lisle in 1858 would probably fail to be accepted were it submitted to a rarities committee today.

The bird has become a local celebrity with local radio and both local and national newspaper coverage. The impact on the local community appears to have been minimal with only a few complaints about light intrusion at night from birders trying to see the bird in a spotlight and no negative comments about parking or birders' general behaviour in the local news broadcasts. Enterprising locals have even taken to selling teas, coffees and ice creams to thirsty birders during the evening and collecting money all in aid of Muscular Dystrophy charities. I am sure that trade at the local pubs has also been boosted significantly by the birders' presence. 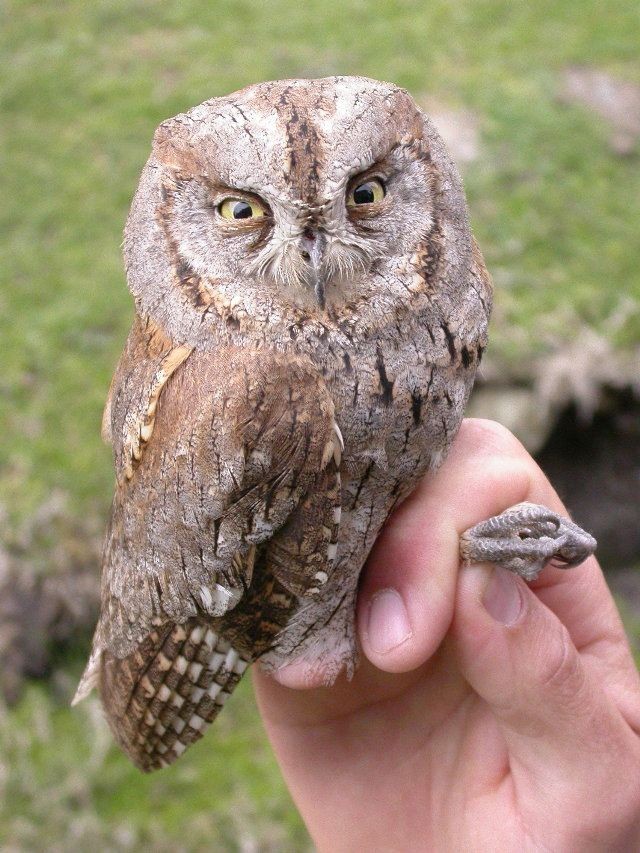 Scops Owl: Fair Isle, Shetland One of the two spring records on Shetland. More expected in terms of location than a calling bird in Oxfordshire! (photo: Deryk Shaw).

Due to access problems ALL visiting birders are kindly requested to park away from the village of Thrupp and walk in. There are several places to park within 1km of the village: at the north end of Kidlington, at Oxford airport, roadside parking along the main A4260 between Kidlington and Thrupp, at the garage 400m north of Thrupp or at Shipton followed by a walk along the canal. Please respect residents' privacy, keep to public rights of way and do not enter any paddocks or allotments, and use any lights sparingly.
Written by: Jon Uren (with assistance from Ian Lewington)