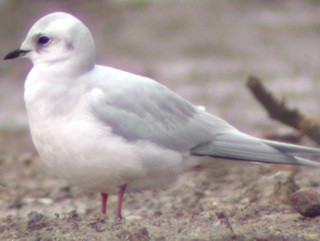 Following several days of strong north to east winds I had decided to have a look around Scarborough Castle for an early Black Redstart; the first easterlies of the spring occasionally bring a bird or two to the back of the marine drive wall. I had been a little too optimistic as usual and my walk only produced a couple of the resident Rock Pipits. I emerged from behind the wall at the north east corner of the marine drive and looked out into the North Bay.

The bay was calm and a quick scan revealed a general lack of birds, I lowered my bins and watched an adult Black-headed Gull drift past. Another gull came along the same line about 40 metres out, this one looked different, I could see no black in its wing. I raised my bins half expecting to see a Med Gull!

These are the moments we all dream about and this one will stay with me forever. A stunning adult winter Ross’s Gull was passing at eye level. It was in view for about 30 surreal seconds before disappearing from sight beyond the curve of the marine drive. I was too far away from the car to chase the bird so I reached for my phone to alert locals.

For the next half an hour I searched the harbour and South Bay areas. The bird didn’t appear to be hanging round with no deviation in flight path so I assumed it had gone south. The Filey lads had been alerted, points south of Scarborough were being checked and I was anxiously waiting for a call. Hopefully someone would re-find it.

After lunch I was on family duty, the boys wanted to go to Scalby Mills to look in the rock pools. On arrival I set up the scope while they went down to the pools. Ten minutes later I was on the phone again, the Ross’s hadn’t gone south at all - it was sat on the rocks with Black-headed Gulls, just to the north of my initial sighting.(apologies to all the birders waiting to the south).

The first birders began to arrive after about fifteen minutes. Thankfully the bird was still there and by the time it did fly there were enough eyes and phones on site to ensure it was not lost. Eventually the bird settled down into a routine which allowed some very close sustained views (check out the photos) on both the sea and its preferred habitat, the North Bay pathways and skate park.