The return of Chris the Cuckoo

Having clocked up over 45,000 miles and his tag having sent around 30,000 messages back to scientists in the UK, Chris the Cuckoo is set to return to the East Anglian countryside for his fourth successive summer wearing a unique satellite tag. Chris, named after TV Wildlife Presenter Chris Packham, was tagged by the British Trust for Ornithology (BTO) on 1 June 2011 and has been uncovering information completely new to science ever since. He is the only tagged Cuckoo that has provided data for three consecutive years. Chris has given pioneering insight into Cuckoo wintering grounds, migration routes and speed of travel, for example, travelling 5,000 miles to get here — in around seven weeks. Chris is currently in northern France and could make the crossing to the UK any day.

From the three consecutive years of his satellite tag data we can see that Chris spends his winter months in the heart of the mighty Congo Rainforest, information that is brand new to science. This winter it seems that conditions in the Congo weren't ideal and he moved south into Angola, joining Skinner, another Cuckoo that was tagged in East Anglia in May 2013. This is the first time that any of the tagged Cuckoos from Britain have ever visited that country. 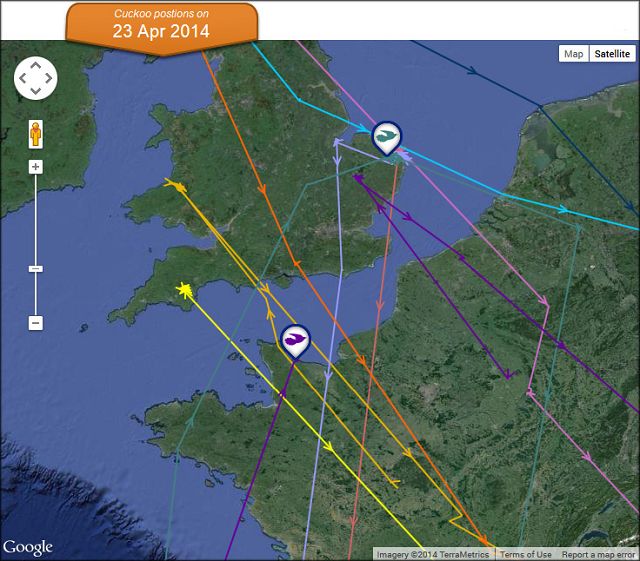 Chris' route to Congo and back takes him across the North Sea to the Netherlands, into northern Italy, across the Mediterranean into Libya, over the searing Sahara to the area close to Lake Chad and, from there into the rainforest for the winter months. However, he takes a very different route back to the UK, through West Africa, crossing over the western Sahara into North Africa, over the Mediterranean to the French Italian border, although this spring he has travelled up through Spain and into France. He usually makes landfall somewhere near to the Sussex-Kent border before making his way back to Norfolk.

Dr Chris Hewson, the scientist leading the project at the BTO, said: "Over the last three years Chris has kept to a pretty tight timetable. In 2012 he came back on the 1 May, and in 2013 on the 6 May but spring is early this year and he is now in northern France and could be back as early as tomorrow."

Chris Packham commented: "We live in an age where technology is allowing us to learn so much more and much more quickly and, this is undeniably exciting . But we also live in an age where species like that Cuckoo are in dangerous declines. The information that scientists at the BTO have received from Chris's tag is vital in helping to understand what might be behind these declines, he is a very special Cuckoo indeed."

To follow Chris on the last few miles of his epic northward migration, and ten other Cuckoos as they make their way back home, please visit www.bto.org/cuckoos.

Great news! Chris had successfully returned to the area in which he spent last summer (and close to where he was originally tagged) by the evening of Friday 25 April. Dr Phil Atkinson, lead scientist on the project said: "It is fantastic that Chris has given us so much information over the last three years. However, it isn't over yet. The technology used to track our Cuckoos is cutting edge, and whilst we think that Chris' tag might stop transmitting in the coming year, we really don't know as this is the first time these tags have been used and they might last longer than we currently think. I really hope that is the case and we get to follow this very special bird for a while longer yet."