The impacts of habitat loss and poaching on Neotropical parrots

It is a sombre thought that your favourite parrot species has a high chance of being threatened with extinction in the wild. Sadly, 28 per cent of all parrot species are classified as Threatened under IUCN (International Union for the Conservation of Nature) criteria, making them one of the most imperilled bird families in the world.

Agriculture, logging, hunting, and trapping for the pet trade markets are all major threats to parrots, with the highest percentage of threatened species – 37 per cent – being found in the Neotropical region. Here, the high numbers of parrots sold in markets of large South American cities is evidence that capture can be to satisfy the domestic demand for pets. Without doubt the poaching of parrots constitutes a major threat, but the relative impacts of domestic consumption versus international trade still require greater clarity. 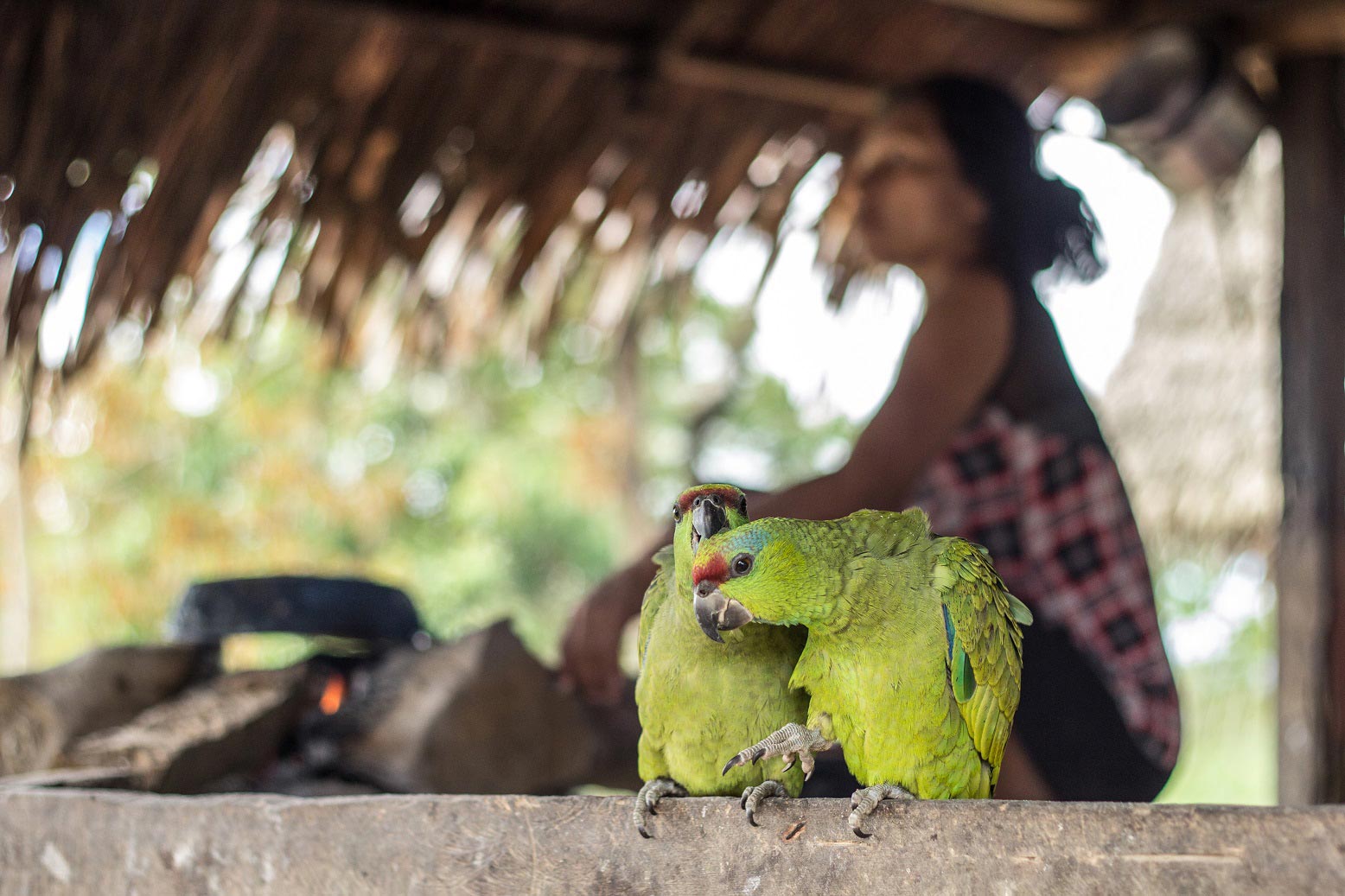 Assessments of the impact of poaching on wild parrot populations still rely substantially on qualitative rather than quantitative data. Therefore, further research intended to measure simultaneously the actual abundances of parrots in the wild and numbers of parrots poached can help to determine with greater accuracy the true impact of poaching on different populations and species of parrots. At the same time, more research is needed to assess the actual impact of parrot poaching compared to that of habitat loss and degradation. Many species may be considerably affected negatively by logging and agriculture, while others may adapt well to human-altered habitats.

The necessary research on a large geographical scale is now under way in a project supported by the Loro Parque Fundación. The researchers, based in Spain but all experienced in field work with parrots, have an enormous distance to travel. There are 22 study areas to survey, in South and Central America and the Caribbean, from Mexico and Hispaniola in the north to Chile and Argentina in the south. These areas cover a variety of continental and island biomes from lowlands to highlands, and from tropical dry forests to mountain rainforests. The study areas were selected to include different biomes and parrot communities as well as different countries and cultures, since the intensity of both habitat loss and parrot poaching may vary between them.

Within each study area the researchers are conducting roadside surveys of the parrots and their habitats. This means driving slowly along mostly unpaved roads, which cover apparently well-conserved habitats as well as altered ones, agricultural land and urbanized areas, avoiding the middle of the day when parrot activity is reduced. They stop each time parrots are heard or sighted to identify the species, flock size, their activity and distance to the observer using a laser rangefinder. When parrots are foraging, their behaviour, the foodplant species, parts of the plant eaten and eventual seed dispersions are recorded to advance the knowledge of their ecological functions. Habitats crossed through the roadside transects are scored into five types in a gradient of habitat deterioration, from natural habitat to urban (areas occupied by small villages and human settlements). The length (in km) of each patch of the habitat of the five types is recorded, as is the number of observed parrots of each species in the patch. 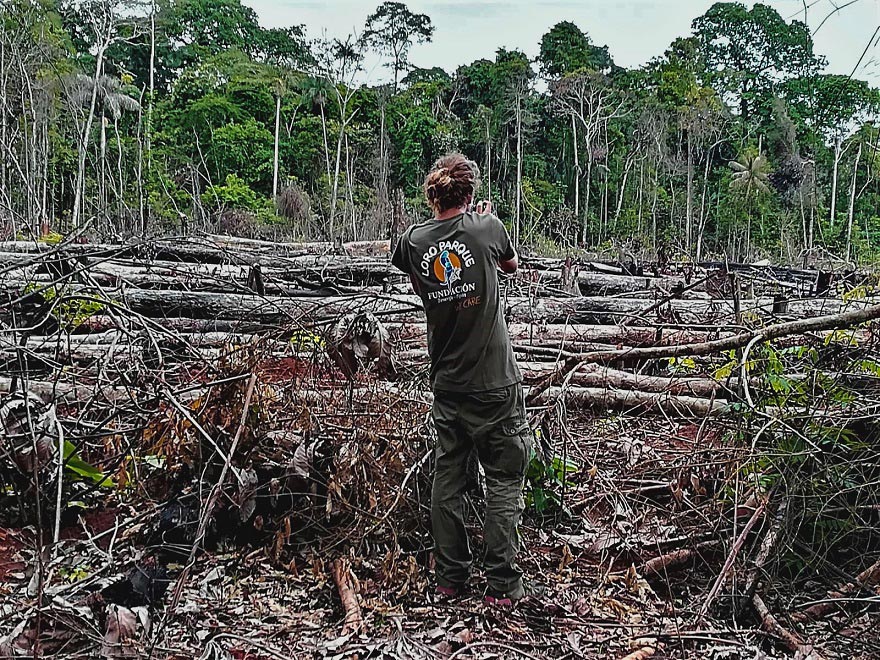 Information about parrot poaching is gathered from informal interviews with people living in local communities and isolated houses evenly distributed through the study areas and conducted outside of the roadside survey times. People are usually unaware of the illegality of parrot poaching, so they are not reluctant to be interviewed and to show their pets to the researchers. When possible, the researchers take photos of the pets and ask the owners if they caught them or bought them (in such case where and at what cost), if the parrot was caught as chick or adult and how, the current age of the parrot, the welfare conditions of pets, if the parrot is free (with wing feathers cut) or caged, which member of the family takes care of the pet, if they caught more parrots and what was their destination (sold or given away, to whom and to where). The researchers also ask whether they had more parrots before and if they died, escaped, were predated or were sold, and what was the age of the parrot at that time. 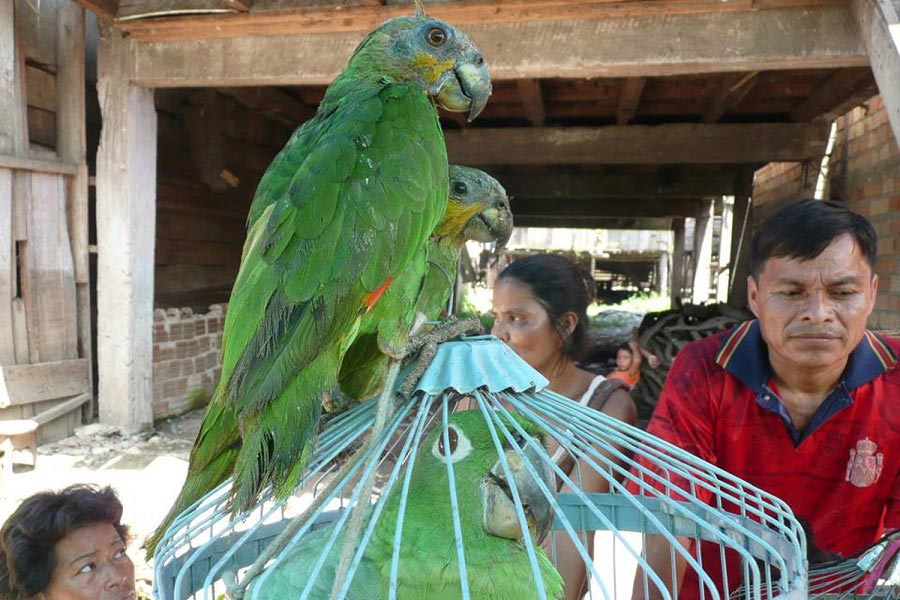 Turquoise-fronted and Southern Mealy Amazons for sale at a market in Bolivia (Mauricio Herrera).

The project benefits from the inclusion of the researchers' unpublished information obtained during the previous seven years of conducting field work in different countries, biomes and parrot communities, with about 35,000 km covered for systematic roadside census, about 160,000 parrots recorded in the wild and thousands recorded as pets, of 65 species ranging in size from the smallest parrotlets to the largest macaws. Some results already published, about the endangered Red-fronted Macaw endemic to inter-Andean valleys of Bolivia, show that the species is not currently threatened by habitat loss and fragmentation but rather by the intensive capture of both nestlings and adults for use as pets. Most macaws are kept by the trappers at home as pets, and only a small fraction (2.8 per cent) are transported to be sold in Los Pozos market, the main wildlife market of Bolivia situated in Santa Cruz de la Sierra (where the Loro Parque Fundación independently financed a study of the species and volume of parrots in trade there). The researchers' study suggests that the real volume of parrots poached is much higher than that estimated by simply surveying Los Pozos market.

In addition to the findings of the research, an important element will be public awareness, and therefore the results are expected to be disseminated in international conferences, high-impact scientific journals, popular journals and a diversity of media outlets. The dissemination of the findings to local collaborating NGOs, local communities and other stakeholders across different Latin American countries will be a priority. This is because a number of successor projects is expected, namely that Latin American NGOs and conservationist groups will locally apply the most needed conservation actions highlighted by the current project. The results are eagerly awaited.